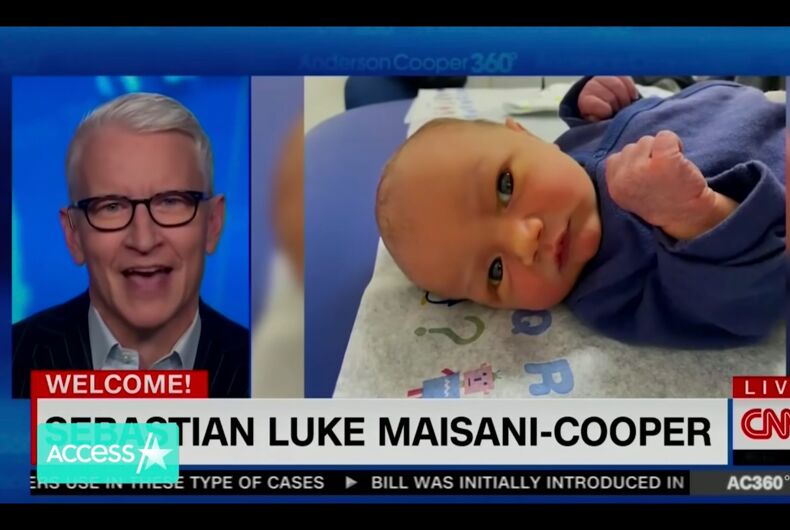 Cooper announced the good news on his show, Anderson Cooper 360, on Thursday night.

Related: These parents will do whatever it takes to defend their trans daughter’s right to play sports

“This is Sebastian Luke Maisani-Cooper,” Cooper gushed. “He was 6.8 pounds at birth and he was healthy and happy. Even his occasional hiccups are to me adorable.

He proceeded to then share a video of the aforementioned hiccupping.

“He mostly just sleeps and eats and he certainly poops, but he already seems like a wise and thoughtful little chap.”

Like with Cooper’s older son, Wyatt, Sebastian will be co-parented by Cooper’s ex-partner Benjamin Maisani, who he described as his “best friend.”

Cooper said Wyatt helped the pair put Sebastian’s crib together and calls him by his middle name, Luke, since “Sebastian is a mouthful for a 22-month-old.”

“We want to thank the amazing doctors and nurses who helped bring Sebastian into the world and most of all thank the surrogate who carried Sebastian and gave birth to him.”

In May 2020, Cooper also announced Wyatt’s birth on his show.

“As a gay kid, I never thought it would be possible to have a child, and I’m grateful for all those who have paved the way,” he said at the time.

Later that month, he explained to Howard Stern why he and Maisani have chosen to co-parent, despite no longer being together.

“I don’t really have a family, so my friends become my family,” he explained. “And this is somebody that I was involved with for 10 years. He’s a great guy.”

“We didn’t work out as a couple… but when I was a little kid, it was just my mom and my brother. But it was my mom and she was not the most parental person.”

Cooper’s father died when the out newscaster was 11. His brother died of suicide ten years later at age 23.

“I wish some adult, after my dad died, had stepped in, and just been like, you know what? I’ll take you to a ball game, or let’s go out to lunch every now and then, and let’s just talk,” he continued. “No one ever did that.”

“So I thought, if something happens to me or even if something doesn’t happen to me, if more people love my son and are in his life, I’m all for that,” he said. “My ex is a great guy and it’s good to have two parents, if you can.”