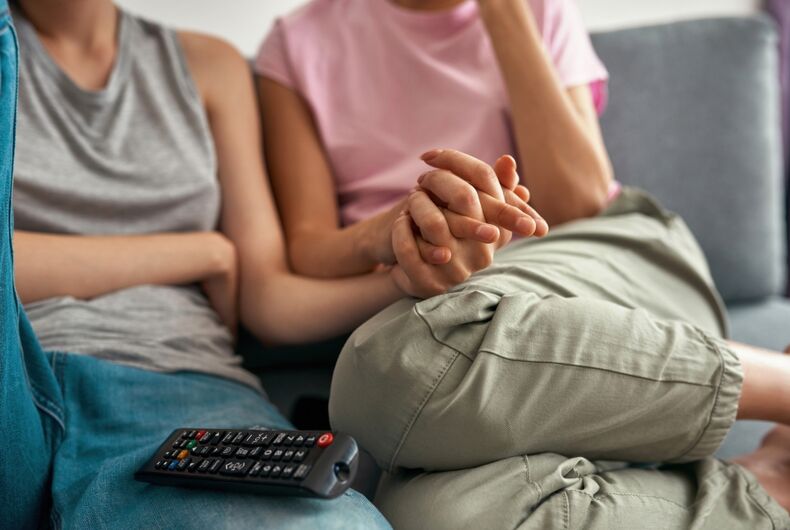 It’s the season of love, so it’s time to dig out the romance movies!

If you’re celebrating Valentine’s Day with a cozy movie night in and you’re wondering what to watch, we’ve got you covered with the best queer romance flicks that will make sparks fly on any date night.

It might take place around Christmas time, but Carol is such a classic romance movie, it can (and should be) enjoyed at any time of year.

The cult classic stars Cate Blanchett as Carol, a stylish older woman going through a divorce who strikes up a forbidden affair with a young shopgirl on the verge of her sexual awakening (Rooney Mara). It’s a tear-jerker, and Carol will stay with you long after the credits roll.

This 2015 movie is set in 1970s Australia. It tells the story of two teenage boys who fall in love while at an all-boys high school. However, they face many obstacles in the form of ignorant relatives and discrimination as they battle through the trials and tribulations of life in order to make their romance work.

This romance/drama movie takes place during World War II. It tells the story of a reclusive writer (Gemma Arterton) whose life is turned upside down when an evacuee from the London Blitz is left in her care. Despite her initial resentment, the pair form quite the bond, and, well, what follows next is just magical.

Love, Simon was groundbreaking upon its release, so Valentine’s Day is the perfect chance to revisit it. The 2018 film (based on Becky Albertalli’s young adult novel Simon vs. the Homo Sapiens Agenda) follows a high school senior as he navigates life while being blackmailed and threatened with outing by one of his classmates while also trying to figure out the identity of his anonymous, romantic, online pen pal named Blue.

Is It Just Me?

This super cute flick tells the story of a young newspaper columnist who can’t find love and starts flirting with a handsome guy online. However, to his horror, he discovers he’s been using the wrong profile and was actually logged into the gay chat site as his beefy roommate. He believes his “Mr. Right” is totally out of reach and merely a dreamboat who’ll never fall for his charms… or will he?

If you like slow-burners, this is the film for you this Valentine’s Day! God’s Own Country explores the will-they-won’t-they relationship between a Romanian migrant (Alec Secareanu) who goes to work at a farm in Yorkshire with the sexually confused son of the farmer (Josh O’Connor). When the farmer’s son is drawn to the newbie, they end up falling for one another, but it definitely isn’t plain sailing.

Portrait of a Lady on Fire

This beautiful French film is set in 1770 and tells the story of a painter who is commissioned to do the wedding portrait of a young woman who has just left the convent. However, Héloïse is a reluctant bride-to-be, so Marianne must paint her without her knowing. So, she observes her and paints her secretly.

The Way He Looks

This 2014 movie follows blind teenager Leonardo, who is in search of his independence. However, everyday life as he knows it totally changes with the arrival of Gabriel. The Way He Looks is a sentimental coming-of-age film filled with compassion, emotionally detailed characters, and warmth that will linger once the movie comes to an end.

This popular 2018 flick follows two women who embark on a 24-hour experiment to see if they can have a totally honest relationship. It’s packed with comedy, some steamy moments, and a whole lot of heart. If you fancy something light-hearted and a little less serious than the romance films that’ll clear you out of tissues, this is for you.