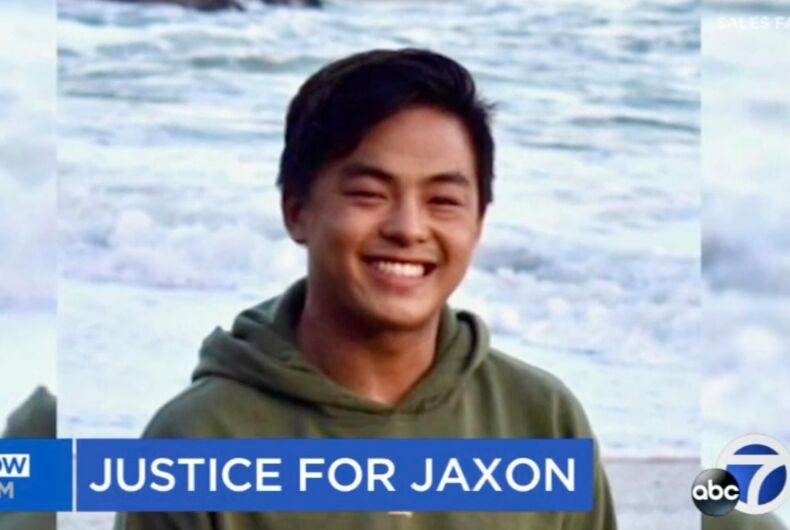 Over 41,000 people have signed a petition demanding that the San Francisco Police (SFPD) and Office of the Medical Examiner (OCME) investigate the death of 20-year-old Jaxon Sales, a gay man who died of an overdose inside a stranger’s apartment.

Sales was found dead on March 2, 2020 in the bed of a 41-year-old white male after telling his parents, Angie and Jim Sales, he was going to someone’s apartment for a blind date.

GHB, often called the date rape drug, was found in Sales’s system, along with cocaine and methamphetamine. The medical examiner subsequently ruled his death an accidental overdose.

Sales’s parents, who launched the petition, claim that when the OCME discovered that GHB played a role in his death, the Assistant Medical Examiner stated that no investigation was needed because “the gay community uses GHB.”

“We believe that if Jaxon was heterosexual, both the SFPD and the SF OCME would have fully investigated the circumstances of our son’s death,” his parents wrote.

David Serrano Sewell, chief operating officer of the medical examiner’s office, would not comment on whether the anti-gay statement was said, but emphasized that Sales being gay had nothing to do with OCME’s conclusions about his death.

“The Office of the Chief Medical Examiner expresses our deepest condolences to the family of Jaxon Sales,” he said. “The OCME conducted a thorough forensic investigation to certify the cause and manner of death in this case with the highest degree of competence, professionalism, compassion, and consistent with state law. A decedent’s sexual orientation, race, religion, or other factors do not influence our death investigations or conclusions.”

In the petition, however, Sales’s parents laid out a series of suspicious details surrounding their son’s death that they have urged police look into.

For example, they point out that according to the Medical Examiner report, the 41-year-old male stated that he and Jaxon went to bed at 2am and he then heard Jaxon snoring when he woke up and took a shower at 6:30am. At 7:30, he called 911 to report that Jaxon was dead.

“If Jaxon was given the GHB right before he went to bed, why would an overdose have taken five hours to kill him?” his parents questioned. “What time did Jaxon ingest that lethal dose of GHB? Did Jaxon actually consent to taking this drug? While Jaxon was dying from a GHB overdose, why did that person shower and clean his residence before calling 911?”

They also wrote that despite the man telling police there were other people present in the apartment the night before Sales was found dead, police have questioned none of them. The man also allegedly gave conflicting reports about whether one or more others were present that night.

Additionally, Sales’s family found out there was another overdose (this time non-fatal) inside the same apartment only a week before Sales died.

“A recent prior overdose in that apartment raises a huge red flag,” his parents said. “Why hasn’t that overdose been questioned?”

Despite even more questions they laid out in the petition, they said that both Captain Timothy Falvey of the SFPD and Serrano-Sewell of the OCME have continuously dismissed their requests to further investigate their son’s death.

The Sales family is now working on hiring a lawyer and filing an official complaint, Angie told the Bay Area Reporter.

Launching the petition, she said, was a last resort.

“We tried for so long this past year to get the agencies to work with us to reopen the case,” she said.

“We had done this for so long alone that we felt sharing his story would allow us to honestly get support in places and from people we didn’t know existed. We saw from other petitions just how much public support there can be in cases like this.”

The petition has certainly helped the case gain attention. On February 4, gay California Senator Scott Wiener (D) tweeted a photo of a letter he sent to the Chief of Police & Chief Medical Examiner demanding they investigate Sales’s death.

“While no investigative outcome will ever make up for the loss of a child,” Wiener wrote, “Jaxon Sales and his parents deserve a full investigation, regardless of Jaxon’s sexual orientation and regardless of which communities do or don’t use GHB.”

Today I sent this letter to the Chief of Police & Chief Medical Examiner about the death of Jaxon Sales & community/family concerns about inadequate investigation of this tragedy. pic.twitter.com/nod66fA7Ek