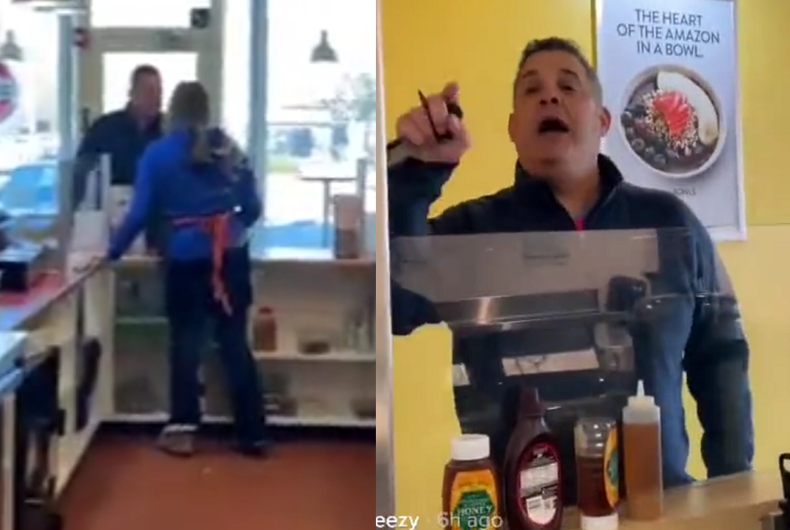 A Connecticut wealth management advisor for the financial services firm Merrill Lynch has been arrested after he threw a smoothie at a Robeks shop’s employees while shouting racist comments at them. Now Merrill Lynch says that he has been fired.

Iannazzo – who was ranked by Forbes as one of the top 25 highest net worth wealth advisors in the state – has been arrested and is facing charges of intimidation based on bias, breach of peace, and criminal trespass in connection to the incident that took place this past Saturday at around 1 p.m. at a Robeks smoothie shop.

According to the police report, Iannazzo ordered smoothies at the shop for his family. His son, who is allergic to peanuts, had a severe reaction to his smoothie. The child was taken to the hospital.

That’s when Iannazzo went back to the shop to yell at the employees, trying to get behind the counter multiple times and calling one a “fucking bitch.” He also threw a smoothie at the employees while making denigrating comments about their immigration status.

“I want to speak to the fucking person who made this drink!” he shouted. “Shut the fuck up!”

The employees told him they were calling the police as they asked him to leave. One suggested he call Robeks’ corporate office to file a formal complaint, while he continued to shout insults at them.

“There was one girl, she was 16,” a viral TikTok video explained. “Literally, it was like her second day.”

Iannazzo left the Robeks before the police arrived, but he was identified through the video. He later turned himself in to the police.

On Sunday – after the video went viral on social media – Merrill Lynch released a statement saying that Iannazzo was fired: “Our company does not tolerate behavior of this kind. We immediately investigated and have taken action. This individual is no longer employed at our firm.”

Iannazzo’s attorney said that it was “a moment of extreme emotional stress” acting on “parental instinct” and promised that Iannazzo is “not a racist individual.”

The lawyer said that Iannazzo told the employees “that the product must not contain peanuts” because of his son’s allergy.

The police report, though, says that employees said that he only requested no peanut butter in the drink but that he didn’t mention an allergy. Extra precautions to avoid cross-contamination are usually taken when preparing food for someone with an allergy and not a mere taste preference.

I've identified this man as James Iannazzo of @MerrillLynch being racist and assaulting a minor pic.twitter.com/O8Ic6jyh3p

Videos of people engaging in racist and hateful behavior have been going viral on social media, with many incidents involving anti-LGBTQ slurs. For example, a bicyclist in 2020 called an Asian man a “faggot” in a racist confrontation.

A man at a South Dakota restaurant also engaged in a racist rant caught on video before turning to anti-gay slurs to practice his “free speech” rights.