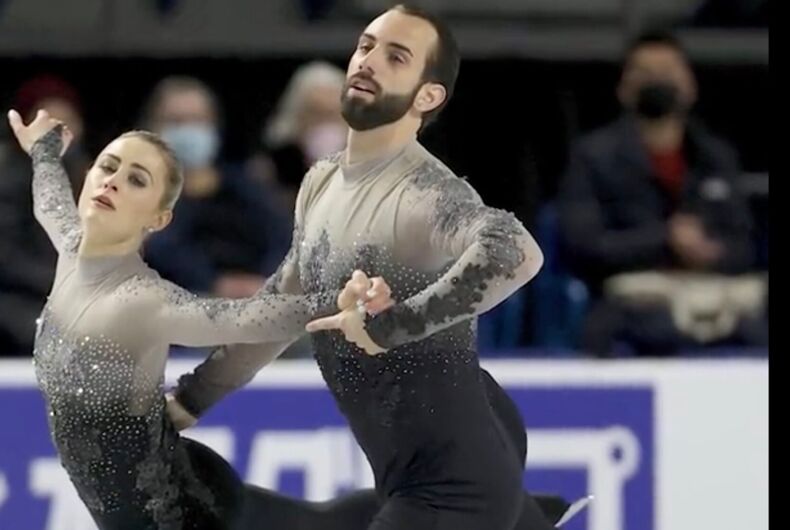 On Wednesday, LeDuc and their pairs partner Ashley Cain-Gribble appeared on the “My New Favorite Olympian” podcast to discuss their revolutionary partnership and how they refuse to conform to the gendered tropes that are hyper-present in pairs figure skating.

Related: Activism is the secret to Megan Rapinoe and Sue Bird’s relationship

Pairs figure skating routines almost always involve a romantic storyline in which a strong man comes to the rescue of a vulnerable woman, but neither LeDuc nor Cain-Gribble are interested in that and instead focus on routines in which both skaters are empowered.

“I never want anyone to feel shame for parts of themselves because they’ve come in to figure skating,” LeDuc said. “I think of skaters like me who maybe want to put on makeup and go out and skate in a costume that maybe is unusual or different, but maybe they wouldn’t do those things because they feel like the judges aren’t going to give them as good of scores.”

In the 2019 U.S. Championships, the pair competed with a routine they called “Two Pillars of Strength.”

“The message is two amazing athletes coming together to create something beautiful,” LeDuc said.

On the podcast, LeDuc also opened up about some of the challenges they have experienced in the extremely gendered sport.

“There are going to be people that don’t understand it,” they said. “You know, they look at me, they see that I have a beard or they look at maybe my physical characteristics and say: ‘You’re a boy, act like a boy. What are you doing?’”

They remembered a coach once pushing them to show “how masculine you are” in a competition, as well as a girl who wouldn’t skate with them during a tryout because “she thought me being gay was going to be a liability.”

Meeting Cain-Gribble in 2016 changed everything.

“When I kind of came to her and said: ‘You know, I don’t really want to do this romantic style. It doesn’t really seem like us,’ she was like: ‘Heck yeah, I’m good with that,'” they said.

Timothy LeDuc could become the first publicly out non-binary athlete to compete at a #WinterOlympics.