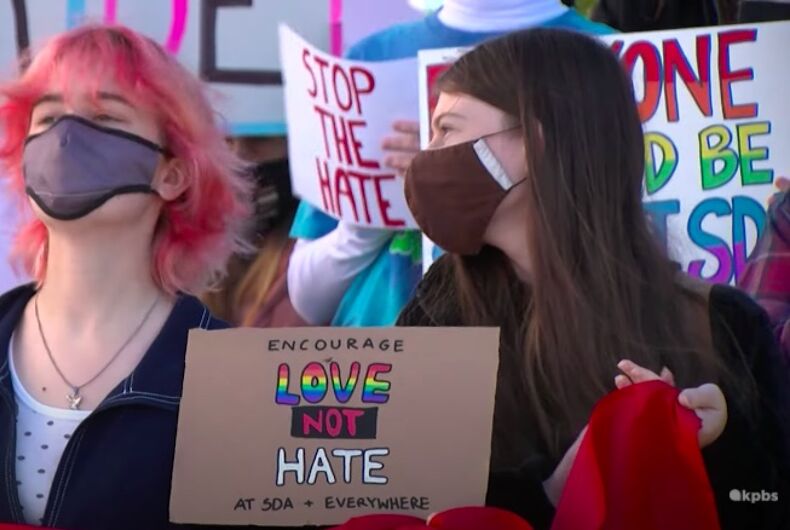 Roughly 150 students, teachers and parents demonstrated outside of San Dieguito Academy in Encinitas, California on Monday after a vandal repeatedly spray-painted the n-word and “faggot” on the school’s exterior during New Year’s weekend.

The demonstrators allege that the school hasn’t done enough to address bias.

Related: A Trump-loving vandal did over $16,000 in damage to a city’s new rainbow crosswalk

“I was not surprised in the slightest,” Aya Jaffer told KBPS. She is the Youth Co-Lead for Encinitas 4 Equality and a junior at the high school.

“I never know what’s going to happen,” Jaffer added. “There are constant threats. Especially this year, in particular, it has felt rockier than ever to be a marginalized student in this district. And it feels scary and it feels unsafe.”

Surveillance video showed that the vandalism happened around 4 a.m. on Saturday, January 1. However, the vandal’s face was obscured by a beanie and mask, according to the San Diego Union-Tribune. District officials are investigating to discover the identities of those responsible.

District employees painted over the graffiti by 1 p.m. on Saturday. The county Sheriff’s Department has since started a hate-crime investigation, though no suspect had been arrested by Monday morning.

Community activist Tasha Williamson took pictures of the slurs and posted them to social media along with the message, “San Diego County has not changed! Our kids are going back to school in Encinitas where racial and LGBTQ hate trauma exist. We continue to be subjected to racism and LGBTQ hate generation after generation.”

Cheryl James-Ward, the San Dieguito Union High School District superintendent, said the district has tried to create an inclusive environment through ethnic-based student clubs, diversity initiatives among students as well as training for employees and a new district role to investigate allegations of racism.

James-Ward also said she appreciates grassroots efforts to address hate and is open to meeting with community leaders to hear ideas on how to improve the school’s atmosphere.

Students and other community members have said that school administrators must do more.

Some suggestions include offering English-class texts written by people of color as well as other texts covering issues of systemic racism and White supremacy. Others have asked for more student mental health services or for the district to hire more faculty of color.