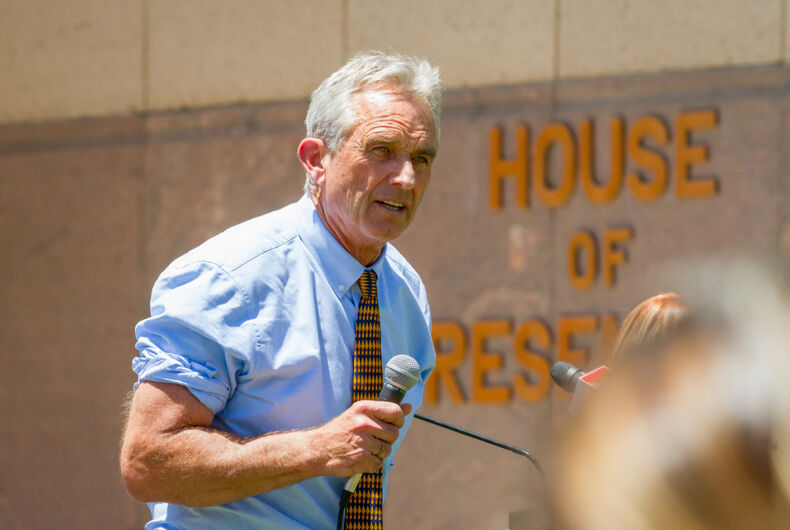 For the next inductee into the United States National Hall of Shame, I nominate Robert Fitzgerald Kennedy Jr. for being the apple who rolled far out of distance from his father and mother’s trees of commitment to national service.

In his misguided capacity as celebrity spokesperson for dystopian anti-vaccine conspiracy theories, Junior seriously crossed a line of even minimum decency and sensitivity by likening government and business COVID-19 vaccine mandates to freedom- and life-ending measures enacted toward Jews under the Nazi regime.

At a rally against vaccine mandates in Washington, DC, on Sunday, January 23, 2022, Robert F. Kennedy Jr. associated vaccine policies in the US with actions of a totalitarian state. He argued that Anne Frank was in a healthier situation when she was hiding from the Nazis compared to being compelled to take life-saving vaccines.

“Even in Hitler’s Germany, you could cross the Alps into Switzerland, you could hide in the attic like Anne Frank did. Today the mechanisms [vaccine mandates] are being put in place that will make it so none of us can run, none of us can hide.”

To equate the medical advancements that save lives and suffering to the brutality of a tyrannical regime amounts to more than simple scare tactics. This sort of historical revisionism trivializes the atrocities inflicted on millions of people who could not easily “cross the Alps into Switzerland” like the Von Trapp family’s fictitious happy jaunt in “The Sound of Music.”

This sort of historical revisionism trivializes the lost youth of Anne, Margot, and Peter and the lost lives of all but Otto Frank, who languished at Auschwitz-Birkenau before his “liberation.”

In a tweet from the Auschwitz Memorial shortly after RFK Jr.’s slander,

“Exploiting of the tragedy of people who suffered, were humiliated, tortured & murdered by the totalitarian regime of Nazi Germany – including children like Anne Frank – in a debate about vaccines & limitations during a global pandemic is a sad symptom of moral & intellectual decay.”

The day following Kennedy Jr.’s notorious diatribe, I participated in a Zoom talk of a friend and mentor to residents in Krosno, Poland.

Alexander Białywłos (“White Hair” in Polish) was born in my ancestral home of Krosno, Poland on June 4, 1923. He was a member of a rather large family including his maternal grandparents, Chaim and Mala Platner, many uncles and aunts, cousins, and siblings: sister Mania, and brothers Solomon and Heniek.

His parents, Mendel Białywłos and Leah Platner Białywłos owned and operated a glass glazing business from their store located across the street from their residence.

Alexander had a good and full life for his first 16 years, until that fateful day of September 1, 1939 when Nazi German troops invaded Poland. Since Krosno was located not far from German-controlled Czechoslovakia, and it contained an airbase and rich oil deposits and drilling capacities, Nazi troops bombed and invaded Krosno soon after crossing the Polish border.

Like many of the approximately 2700 Jewish residents, his family fled east, but finding no place to hide, many, including his family, returned home.

By 1942, Nazi troops had killed most of the Jews in the area including most of my maternal Mahler family. Near Krosno, Alexander’s mother, Leah, and sister, Mania, were taken and shot to death.

His older brother, Solomon, was murdered in the nearby town of Jaslo. His eleven-year-old brother, Heniek, the Nazis transported to Auschwitz-Birkenau concentration camp and gassed. Except for a small number of remaining Jews whom the troops crammed into a small ghetto in Krosno, most others were transferred to Belzec and Auschwitz-Birkenau concentration camps where only a very small handful survived.

Having technical and mechanical skills in glassmaking and repair, Alexander and his father, Mendel, were sent to the nearby airbase where they worked repairing German airplanes until December 1943, when the Nazis cleared out the ghettos, which included my maternal great-grandfather, Wolf Mahler, and sent all remaining Jewish residents to Krakow-Plaszow concentration camp just south of the town.

On May 7, 1944, German soldiers forced prisoners into a “Naked Parade” for selection either to be sent to Auschwitz-Birkenau, or for only a few, to be shipped to work details somewhere under Nazi occupation.

Alexander’s father, Mendel, was selected for Auschwitz-Birkenau. In his book, Alexander wrote:

“‘Be a mensch,’ were the last words that my father said to me before he was led to the death train and disappeared forever. We were standing on the Appelplatz assembly place in the Concentration Camp Krakow-Plaszow one early morning in mid-May 1944. Moments later, in complete clarity about his fate, he would be led off to the boxcars of the train that was to take him, and others selected by the Nazi doctor, to Auschwitz. There he would be murdered in the gas chambers.”

“I tried to give him the only thing I had — a small piece of bread I carried with me — as an expression of hope for his survival, even in Auschwitz. He said, ‘You keep it. I will not need it anymore. I do not care to live. I have lost everything, and if I live another ten years, I will eat another ton of potatoes.’ He pushed the bread back to me. It was the last time I saw him.”

Though he can only speculate how it happened, Alexander somehow turned up as #270 on a list of about 1,100 Jews transported to the factory of Oskar Schindler (what became known as “Schindler’s List”).

Beginning in October 1944, Alexander and hundreds of other Jews worked at Schindler’s factory in Bruennlitz, which is today part of the Czech Republic. He often remembers Emilie Schindler, Oskar’s generous and compassionate wife, giving the workers extra food to keep their bodies and their spirits alive.

Rescue came on May 8, 1945, when the Russian army freed him and the others at the factory. Alexander immediately returned to Krosno to discover whether any family members had survived, only to find that only he, his Uncle Sam Białywłos, and his cousin Joseph Fruman had lived through the horrors.

Once back in Krosno, Alexander walked to the house owned by his parents where he grew up, but Polish people soon confiscated it after Nazis evicted Alexander and his family. Talking then with the current residents, one angrily quipped to Alexander:

“Oh, we thought you would be dead by now and the Nazis had made you into soap.”

Alex knew that Krosno was no longer his home.

He moved to Munich, Germany, and lived there between 1945 and 1950 where he completed his high school and medical degrees. On June 8, 1950, he immigrated on the ship General Sturgis to the United States.

He completed his medical internship in New York City, and he eventually moved to Chicago to begin his practice. There he met the love of his life, Inez. They married and had three children: Denise (who now lives in the Phoenix, Arizona area), Julie (who now lives in San Francisco), and Les (who remained in Chicago). Alexander and Inez retired to Scottsdale, Arizona in 1998.

Alexander Białywłos-White represents one of those individuals whose indomitable and perennially optimistic spirit and whose warmth and light radiate from his very being illuminating all in his presence. Now at 99, he shares his experiences as a Jew under Nazi oppression.

He is someone whom I consider one of those rare individuals who exemplifies not only a true survivor, but even more importantly, one who has consistently taken every hurdle he has faced in stride leading the way with grace and dignity.

Alexander fulfilled his father’s request in becoming a true, compassionate, and courageous mensch, one who serves as a positive role model to us all. He has dedicated his life to serving and healing the bodies of his patients, and to healing our world from the horrors of the past.

Robert F. Kennedy Jr. shame on you. You never have been the mensch your parents had hoped you could be.

Laura Ingraham was so bothered by Kate McKinnon’s impression of her, she did one right back