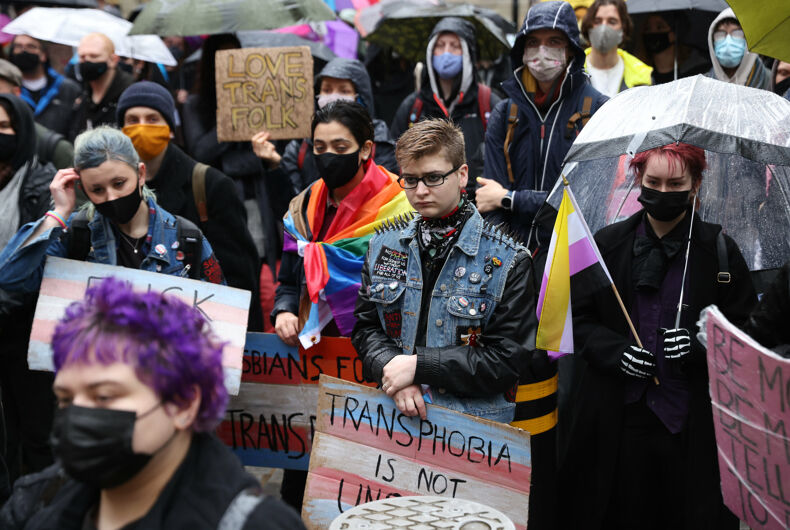 Hundreds were present at a demonstration organized by Trans Activism UK outside of the headquarters of the British Broadcasting Corp. (BBC) in London, objecting to their coverage of transgender and gender-diverse communities that advocates allege are biased and discriminatory.

It’s at least the fourth demonstration in the last three months, following the BBC’s publication of an article entitled “We’re being pressured into sex by some trans women” written by Caroline Lowbridge. Lowbridge’s article cited a “survey” of 80 people produced by an anti-trans organization claiming that it is common for trans lesbians to “pressure” cis lesbians into sexual relationships, and further quoted another anti-trans organization. The article did not include any perspectives by trans people.

“This has been a gradual decline that has included increased uncritical platforming of anti-trans hate groups, only presenting trans people’s perspective if ‘balanced’ with an anti trans voice as a matter of policy, and presenting stories that imply, inaccurately, that trans people are a danger to the public,” one organizer told PinkNews ahead of the demonstration.

“We are very tired but so proud beyond words of our amazing community,” the organization said after thanking participants.

The protest today was great. Hearing trans voices express themselves in face of an institution with the pair over our mainstrean acceptance. Thank you to everyone that came.

Another successful protest! @TransActivismUK Thank you everyone for turning up, our speakers did amazingly and our volunteer stewards and first aiders thank you for keeping everyone safe! @BBC I hope you listened and learned! #bbcbigotry #BBCScandal #TransRightsProtest pic.twitter.com/wdUCfP71JL

Several protestors expressed their dismay not only at the one article by the BBC, but several others that have failed to impartially and respectfully depict trans and non-binary people.

“I’m non-binary, this is my community, and the BBC has been launching attacks on people like me and all these people out there today,” one protestor named Charlie told Openly News.

“I just felt it was my responsibility to turn up today,” said a protestor named Amanda, “just to support the fight against institutions like the BBC who have joined the rest of the media in attacking trans and non-binary people.”

Are you tired of the UK's government-sanctioned broadcasting corporation promoting a clear agenda of hate and discrimination?

Can't ignore the recurring platforming of bigots with a queerphobic agenda?

Join us on 8th Jan 2022 at 1PM, Broadcasting House!#TransRightsProtest pic.twitter.com/uqMPfS89ko

One woman claimed a trans woman pressured her into having sex when she was drunk and couldn’t “have given proper consent.” Another said a trans woman raped her. Yet another compared dating trans women to being forced into “conversion therapy” to change one’s sexual orientation.

The article cited an anti-trans lesbian group called Get the L Out! which ran a small survey of 80 women already affiliated with the group. The critically flawed study found that 56 percent of respondents reported being pressured or coerced to have sex with a trans woman.

The article has since been revised, but the BBC has refused to retract it. Most of the perspectives shared in the story are presented anonymously, but one person quoted by name, Lily Cade, was removed from the article entirely after publication. Cade had been accused of sexual assault multiple times, and after the article was released, published a long tirade on her own website calling for violence against and killing of trans people, whom she describes as “vile, weak, disgusting whiny, fake-victim.”

Still, the BBC stood behind the article, which they claimed went through a “rigorous editorial process.” Since then, even BBC’s own staff has also begun objecting to the organization’s coverage of trans people in multiple “listening sessions” held by management.

The BBC has also been criticized for their decision to end their partnership with the pro-trans British LGBTQ organization Stonewall right after the article’s publication, which staff has reportedly argued further maligns their journalistic objectivity when covering trans communities.

The BBC issued a statement after yesterday’s protest, declaring, “We don’t agree with this characterisation of our output. There are many articles on the BBC website about transgender people that reflect a range of views and perspectives. We do not condone or support discrimination in any form.”

The BBC had 3 of the top 6 most engaged with online content on ‘trans’ topics in the last year.

This is a pretty huge #TransRightsProtest against the transphobic @BBCNews (especially considering the weather & the Covid). There are clearly many more people there than previous photos have shown.

The BBC needs to stop broadcasting hate and lies about #trans people. https://t.co/TnAvYUyFwy