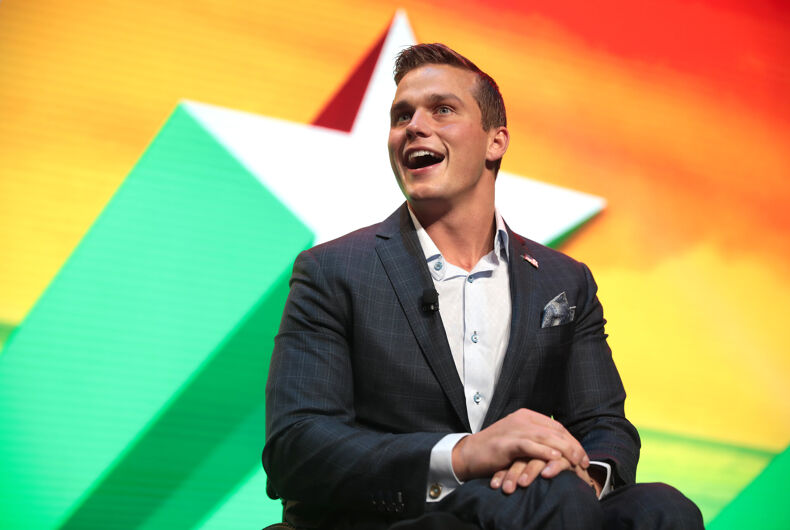 Rep. Madison Cawthorn (R-NC) is continuing to taunt out MSNBC host Rachel Maddow over an email her producer accidentally sent to his office.

The email, intended for an NBC News coworker, was about Cawthorn and flatly said they didn’t want him to appear on the show.

A group of voters in North Carolina has challenged Cawthorn’s ability to be on the ballot, citing his support for the January 6 insurrection at the U.S. Capitol as a disqualification. They say a constitutional amendment ratified after the Civil War bars candidates “who, having previously taken an oath, as a member of Congress… to support the Constitution of the United States, shall have engaged in insurrection or rebellion against the same.”

Maddow’s unnamed producer emailed her colleague asking if they planned on asking Cawthorn about it.

‘If not, is that something you guys could do? We don’t have a relationship with his office and between you and me are a little worried that if we did inquire he might ask to come on and explain. I know that is HIGHLY doubtful, but don’t want to take that risk,” the email continued.

Cawthorn’s office has seized upon the email to “prove” that Maddow is “afraid” to debate him.

“Fake news MSNBC doesn’t want to ‘take the risk’ that I’ll come on their show and trigger the left with my America First message and burst their woke dystopian bubble,” Cawthorn told Fox News. “The left doesn’t want debate from conservatives, they want silence. And now we have it in writing. Sad!”

He has continued to try to troll Maddow online, tweeting about the accidental email multiple times in a bid to gin up controversy – along with pleas for campaign cash.

“Left-wing activists are trying to stop me from fighting for YOU THE PEOPLE! I won’t be stopped. Help me fight back!,” Cawthorn tweeted with a link to donate.

Cawthorn is an opponent of LGBTQ rights. When the Citizen Times asked him about his views on LGBTQ rights when he ran for Congress last year, he said that he opposes government involvement in marriage, even as he was engaged to marry his wife.

Eight months after getting married, the couple has filed for divorce.

Maddow, the first lesbian Rhodes scholar, has not responded to Cawthorn, who was busted lying about being rejected from the Naval Academy.

What is @maddow afraid of?? https://t.co/ZC7Hf8whGl

Editor’s Note: This article has been corrected to reflect that Cawthorn was rejected from the Naval Academy and not West Point.