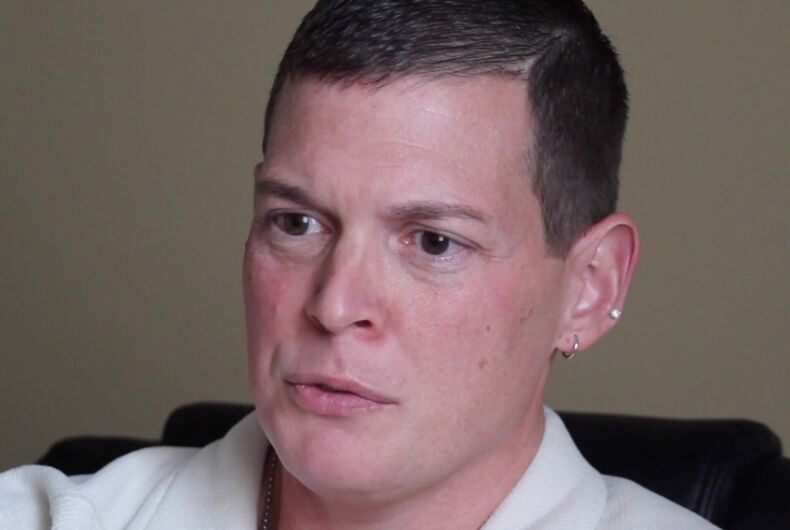 A lesbian member of the West Virginia Air National Guard is suing both the U.S. Army and Air Force, alleging that her male boss penalized her for not being feminine enough.

Tech. Sgt. Kristin M. Kingrey, 37, has been a member of the military for over 14 years and says her superiors threatened that, if she didn’t grow out her hair and start wearing makeup, there’d be consequences to her career.

After issuing the threat, the lawsuit alleges her leaders followed through, withdrawing her acceptance from a job she had already been offered and refusing to hire her for another role, even though she was qualified.

The lawsuit names one leader in particular, Vice Wing Commander Col. Michael Cadle, who it says repeatedly targeted Kingrey for her appearance and sexual orientation.

It also says Kingrey has been experiencing harassment for years.

“From 2016 to 2018, I was constantly being pulled into my seniors’ offices being told my hair was out of regs [non-regulation],” Kingrey told The Daily Beast. “It crossed a line into harassment, and I carried on my person a copy of our regulations in regards to female hair length because I was not breaking any rules.”

While it was difficult for Kingrey not to give in to the demands to appear for feminine, she ultimately decided to stand her ground.

“I thought it would really devastate my career. Then I thought, ‘I’m within the guidance. This is a personal belief on their part. I am who I am. I am being myself. I am not the one in the wrong. I am not the one who crossed the line. Why should I have to change because of someone else’s belief?’”

Kingrey works on a joint forces’ base, which is why she is suing both the Air Force and Army. Because her role as a technician is categorized as a civilian position, she is able to bring the lawsuit to federal court.

Kingrey’s lawyer, Mike Hissam, is using the Supreme Court’s decision in the landmark LGBTQ rights case of Bostock v. Clayton County to allege Kingrey was the victim of anti-LGBTQ discrimination and was unlawfully discriminated against on the basis of sex.

Hissam is also arguing that Kingrey should be given the position she was originally offered and provided with back pay.

Kingrey said the bringing on the lawsuit, which could last up to two years, has been difficult. She believes it has led to “retaliation” from higher ups, as she and some other women she works with are now being investigated for an offense called “fraternization,” which means socializing across ranks.

“In all my time in the military, no one has blinked when men do it — hunting, going fishing, playing golf, families vacationing together — but here we are, three women, under investigation for the same,” she said. “I find it very odd that shortly after I filed my Equal Employment Opportunity Complaint complaint [EEOC] I find myself under investigation.”

Despite all of the hardship, Kingrey said she has no intention of leaving.

“I have not considered quitting. I will not be defeated. They are not going to make me leave something that I truly love, and I truly love putting on the uniform every single day. I love my country, and I love my state, and I have served them both honorably for over 14 years.”

She added that she hopes her efforts make a difference.

“I truly hope positive change comes from my case and it prevents another individual having to walk this path, because it is a very long and dark path to walk.”

Robert F. Kennedy Jr. has never been the mensch his father hoped he’d be

Psaki blows off reporter who accuses Biden of Twitter diplomacy. It only took one name.