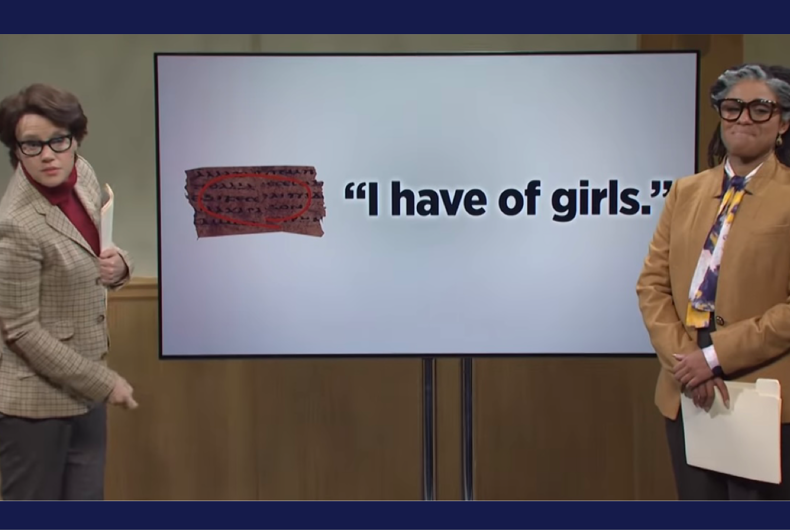 Out West Side Story actress Ariana DeBose hosted the first Saturday Night Live episode of 2022 last night, and out castmate Kate McKinnon was by her side, starting from the opening monologue when they sung a West Side Story medley together. The two paired together for a skit called “Sappho,” featuring DeBose and McKinnon as two academics who were chosen to translate supposedly newly-found ancient poems and scrolls from the island of Lesbos, possibly written by Greek poet Sappho, thanks to “a tragic crash of a rogue Rosie O’Donnell family cruise — all survivors.”

Both are so synonymous with gay women that the words “lesbian” and “sapphic” are derived from them. As it turns out though, what seems like “timeless” writing seem to be too closely related to the modern life and time of lesbians.

While a male Cornell University academic (played by Mikey Day), who says “any lover of ancient Greek literature is as hard as a statue of Adonis right now” — watches as the lecturers present their translations of the poems, starting with: “Wind in mountains. Eyes of goldenrod. We broke up, Helena. Please get your sandals out of here.”

The next one went: “Golden raisins. River banks. Nancy, we just met. You’re scary and a bitch. Move in with me.”

The next poem: “Olive juice drips. Sun touched. We cannot get another dog. We are maxed out on dogs. That being said, I found a pregnant feral cat behind the grocery store. Pleeease?”

Another one: “You satisfy our passion. The Aegean beckons. Why don’t gay guys invite us to their events? Are we not fun? Don’t answer that.”

Nancy returns in this one: “Woven garlands, Greek Tree, Nancy, you moved in three weeks ago. It has been hell. Marry me.”

Lastly, what McKinnon calls “the most stirring of all”: “I don’t care if Helen of Generes was mean. She did a lot. You think James of Corden is a walk in the park?”

Onlooking attendees (Chris Redd, Chloe Fineman) of the “sold-out free lecture” began to question the veracity of their translations, leading them to ask, “has this been peer-reviewed?”

“Yes, we were married,” McKinnon responded.

The lecturers also presented other lost artifacts discovered “which help us recreate Sapphos’ life,” including a Nalgene water bottle, a toga with suspenders, and a “vase with the face of some kind of ancient Greek goddess, we think of hotness?” which one attendee identifies as a picture of Gillian Anderson from the X-Files.

Finally, Day’s character steps up to try and translate himself to verify their findings, but he reaches the conclusion that they were right after all.