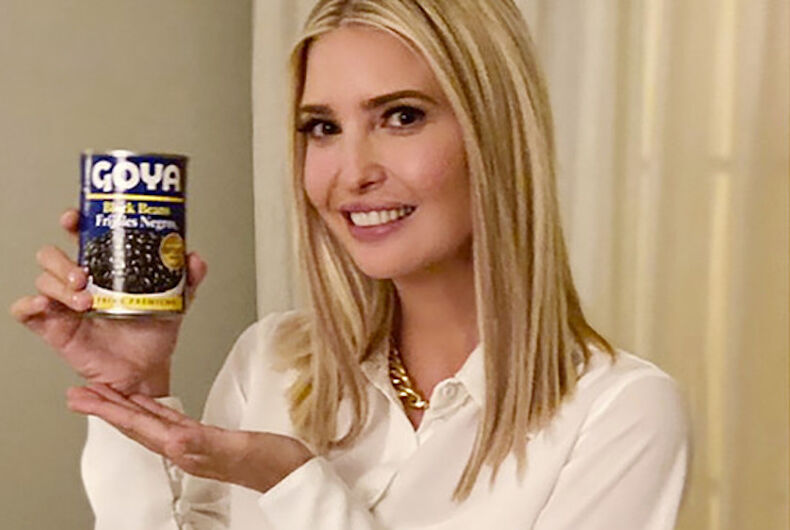 Former White House advisor Ivanka Trump is getting slammed on social media for turning a food bank into a photo op, with some accusing her of trying to rehabilitate her image for a career in politics.

Trump posted a series of photos to Instagram and Twitter that showed her working with the group Chobani to deliver food. The photos are high quality and she is not wearing a mask while delivering food boxes.

“Thank you to our many incredible partners and volunteers who helped feed tens of thousands American families across Idaho and NY, with fresh, nutritious, locally-sourced produce and dairy this holiday season,” she wrote.

Trump also did a New York Post interview about the food drive. “This really evolved out of a discussion [Chobani founder Hamdi Ulukaya] and I had over lunch once day as the holidays were approaching and the dollar is going less far due to inflation,” she said.

Vanity Fair’s Bess Levin blasted Trump’s “photo shoot pretending to be a good person,” which follows her time in a White House that separated young children from their families, worked to take away rights from LGBTQ – and especially transgender – students, servicemembers, and workers… and tried to take away food stamps from low-income Americans during the COVID pandemic.

Levin noted that Trump has laid low this past year after the Capitol Insurrection – Trump was already having public image problems towards the end of the Trump administration, despite her possible political ambitions – before “posting several stylized photos of the [food drive] after the fact—and with no information for people who may still be looking for food assistance,” saying that the photos don’t help “anyone but herself.”

“On Tuesday, she apparently felt a pull too strong to stay away,” Levin wrote. “You know the pull we’re talking about: the one whispering, ‘Don’t even think about doing something good for others without posting about it in an attempt to start rehabbing your image.'”

Thanks for being around all of those people without a mask. The only consolation is you were probably only there for 2 minutes to take pictures …

It would've been nice if you did this without the photo op.

When you do good to other people, don’t hire a trumpeter to go in front of you—like those in the synagogues who make sure that men admire them. When you give to charity, don’t even let your left hand know what your right hand is doing, so that your giving may be secret. Matt 6:3

Where in Idaho and New York? Is that a vineyard you're staying in?

Good timing on this "charity look" for you, Ivanka. On the phone w your image consultant?