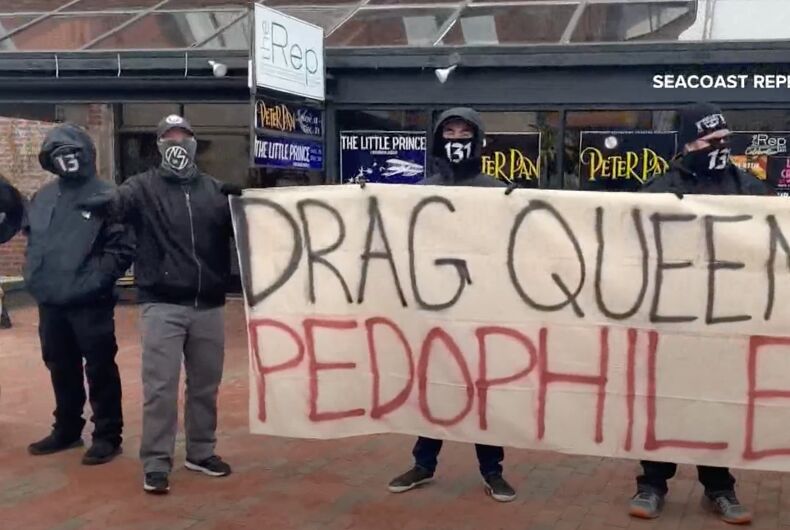 A group of men afraid to show their faces protest outside of the Seacoast Repertory Theatre over a drag queen's performance.Photo: Screenshot

A group of sad white men wearing black masks marched from Maine to New Hampshire to protest a drag queen. The show of bravado and strength involved walking across a bridge.

Members of the hate group Nationalist Social Club (NSC-131) gathered outside of Portsmouth’s Seacoast Repertory Theatre with signs and vitriol, despite the lack of public performances taking place since the venue has been closed due to COVID since early 2020.

When the pandemic started, the theater moved shows online, with actors performing in front of empty seats. One of the productions, Honey Punch and Pals, includes a drag queen dressed as a 50s homemaker who reads books to puppets.

The actor who portrays Honey Punch will continue in the role for season three, but admits that he has faced death threats since the group targeted him.

When James and co-director, Ben Hart, were alerted that the men had descended on the theater, Hart admits he wasn’t prepared for what he saw. He assumed it would be a small group of religious right protestors waving signs and yelling about sodomy.

“What we weren’t expecting was a militant line of aggression,” he said.

Members of the neo-Nazi group, who were too afraid to show their faces, held a banner that read “Drag queens are pedophiles.” The big word was spelled correctly.