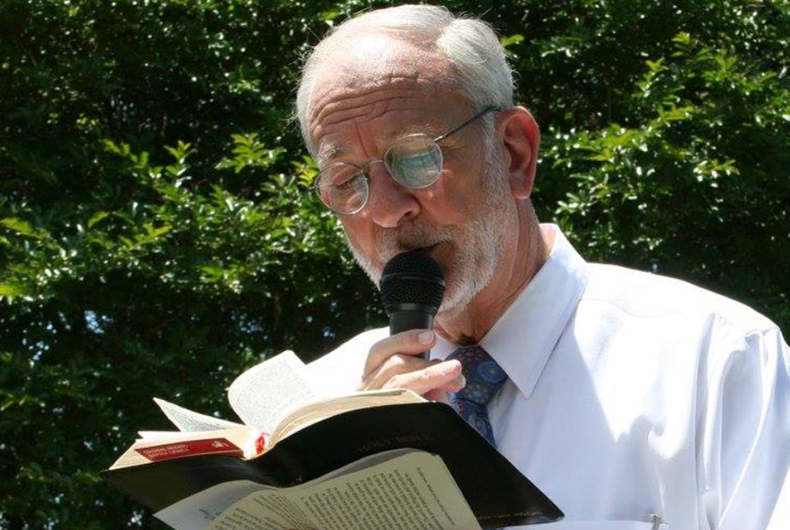 The mayor of a small Mississippi city is withholding $110,000 from the county’s library system until it removes all LGBTQ books.

Tonja Johnson, the executive director of the Madison County Library System, was confused when the library didn’t receive its first 2022 quarterly payment from the city of Ridgeland. She called Ridgeland Mayor Gene McGee (R), who told her the library would not be receiving the money until it removed all LGBTQ content from the shelves.

“He explained his opposition to what he called ‘homosexual materials’ in the library, that it went against his Christian beliefs, and that he would not release the money as the long as the materials were there,” Johnson told the Mississippi Free Press.

Despite Johnson explaining to McGee that the library is not a religious institution and is there to serve the entire community, she said McGee emphasized that “he only serves the great Lord above.”

One book McGee specifically mentioned that he wants out is The Queer Bible, a book of essays about LGBTQ history and culture.

Johnson believes McGee’s outburst could be a reaction to a few informal complaints the library has received about LGBTQ content.

“I think that’s probably where the mayor’s objections are coming from. Perhaps they reached out to him instead of back out to the library.”

The $110,000 McGee is withholding is about 5% of the library system’s annual budget. Losing it, Johnson said, “would definitely impact services” and could even result in some staff members getting laid off.

McGee also made it clear that he alone made the decision to withhold the funds, without the approval of the city’s board of aldermen, who had already approved the 2022 budget. The library board has decided to speak with the board of alderman before pursuing any legal action.

No matter the outcome, Johnson said she doesn’t anticipate the library bending to McGee’s demands.

“Ultimately it is up to the [library] Board, but I do not think they will make that decision,” Johnson said. “As a library, our mission is to serve our community and to provide everyone in the community with the information and resources that they need…Anyone can walk into a library and find something that they don’t agree with, but the book that’s not quite right for you is exactly what someone else needs. And my job is to make sure that [everybody] has access to that.”

Kit Williamson, who grew up in Mississippi and went to school in Ridgeland, told LGBTQ Nation that as a young person trying to become comfortable with himself, LGBTQ representation in stories meant the world to him.

“Representation is a powerful, life-saving force and seeing myself reflected in stories growing up helped me envision a future free from the shame and fear that was consuming me as a kid,” Williamson said. “Far from an isolated incident, actions like this attempted book ban are part of a concerted effort to erase LGBTQ people from the public eye, but we’re here to stay and we will not go backwards.”

He added that McGee “needs to go to the Ridgeland library and read up on the constitution” and that “Mississippi is not a theocracy, and this is a clear violation of the 1st amendment.”

Johnson also emphasized that LGBTQ books are not only there for LGBTQ people, but also to help everyone gain more understanding and empathy for one another.

“We all live in this world together,” she said. “We sit next to people in church, we work with people, we live next door to people, our children go to school with children who don’t look like us and don’t have the same experiences. If we’re going to be together, we have to at least understand each other’s stories.”

Calls to ban books with LGBTQ content, as well as content about race and gender, are taking place across the country as part of a conservative crusade. Conservatives argue that parents have a right to prevent their children from learning about racism and LGBTQ people.

Stephen Breyer is retiring from the Supreme Court. Get ready for an epic Senate battle.