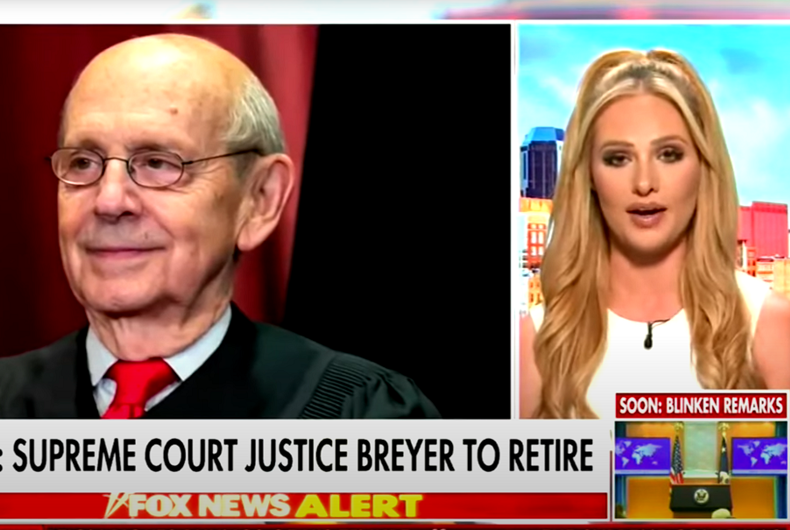 Discussing the news of Breyer’s announced retirement, Lahren said that she as sure Biden will pick “a Black woman, you know, he’s got a dedication to that.”

Related: “Nazi Barbie” Tomi Lahren goes viral after whining someone called her that to her face

“We saw how well that worked with Kamala Harris,” Lahren said, referring to the vice president. “Here’s to hoping that he has a better choice in mind for this position.”

Several progressive and LGBTQ organizations have already asked Biden to make good on his campaign promise to put a Black woman on the Supreme Court.

“I am committed that if I’m elected president and have an opportunity to appoint someone to the courts, I’ll appoint the first Black woman to the courts,” Biden said in March 2020. “It’s required that they have representation now. It’s long overdue.”

“We also note that this retirement presents President Biden with a historic opportunity to address the fact that, for too long, our Supreme Court has not adequately reflected the diversity of the legal profession or our country as a whole,” the LGBTQ rights organization Lambda Legal said in a statement. “We look forward to the President honoring his campaign commitment to nominate a Black woman to the Supreme Court, achieving a long overdue ‘first’ for that institution.”

“We’ve seen time and time again that LGBTQ freedoms are fought for and won in the courts,” LGBTQ Victory Fund Executive Director Ruben Gonzales said in a statement. “It’s past time we have representation in the highest judicial body tasked with protecting our fundamental rights. Justice Breyer was a champion of equality during his nearly three-decade career on the bench and replacing him with an LGBTQ Black woman justice would be a powerful way to carry on his legacy.”

Lahren has a long history of inflammatory statements, including calling Black Lives Matter “the new KKK.”

In 2018, she said that the “highlight” of her Thanksgiving was watching Border Patrol agents fire tear gas at immigrants – including children – trying to enter the U.S.

Lahren has also attacked LGBTQ equality repeatedly, including when she once got mad at Barack Obama for supporting marriage equality.