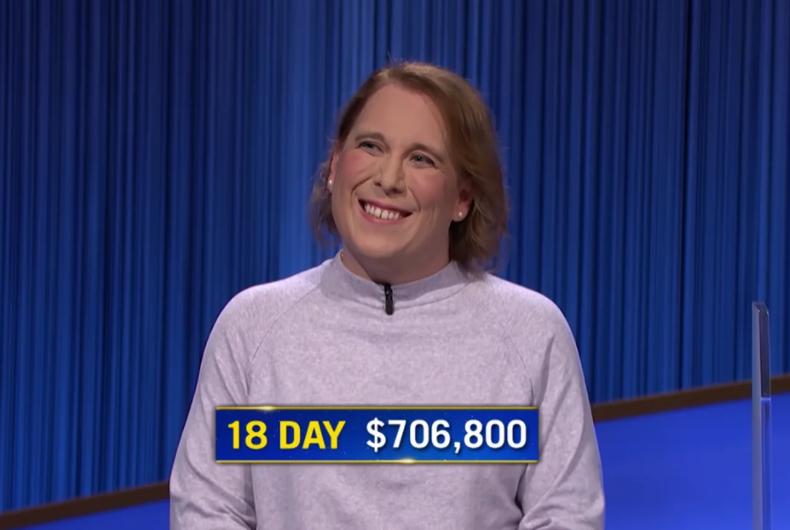 Conservatives are outraged that transgender women are succeeding yet again, this time when it comes to Jeopardy!

Amy Schneider made history last week, becoming the woman to win the most consecutive regular season episodes of Jeopardy! and the highest-earning woman to ever appear on the show. She is also the first out transgender contestant to make it to the Jeopardy! Tournament of Champions.

Related: This out Jeopardy contestant won almost $100k. And our hearts.

And conservatives are mad because, like with sports, they argue that transgender women succeeding means that cisgender women lose something.

“In which NBC attempts to convince Americans that a glass ceiling has been shattered but in fact, has built another one — to the great detriment of biological women everywhere,” Sarah Parshall Perry of the Heritage Foundation said, according to the Washington Times. She was referring to an NBC headline about Schneider. “We know when we’re being lied to.”

“Peak feminism now means handing over all the ‘first woman’ titles to men posing as women,” Rachel Bovard of the Conservative Partnership Institute said. “From the athletics to the nerdy game shows, to the miracle of giving birth. Women, as a separate and amazing biological category, are meaningless. Great job everyone.”

The patriarchy has really upped its game.

In a few decades no records will be held by cis-women!!!
Let’s go!!!

The fact that there are ACTUAL WOMEN in this country who approve of this is simply mind boggling.

Kelly – who previously held the record for highest-earning woman in the show’s history – was more gracious towards Schneider’s success.

“Well, it was fun to hold a Jeopardy record for a few years…but it’s been even more fun to watch [Schneider] set new standards for excellence, on the show and off,” Kelly tweeted. “Congratulations to Amy on becoming the woman with the highest overall earnings in the show’s history!”

Well, it was fun to hold a Jeopardy record for a few years…but it's been even more fun to watch @Jeopardamy set new standards for excellence, on the show and off. Congratulations to Amy on becoming the woman with the highest overall earnings in the show's history! 📿👑