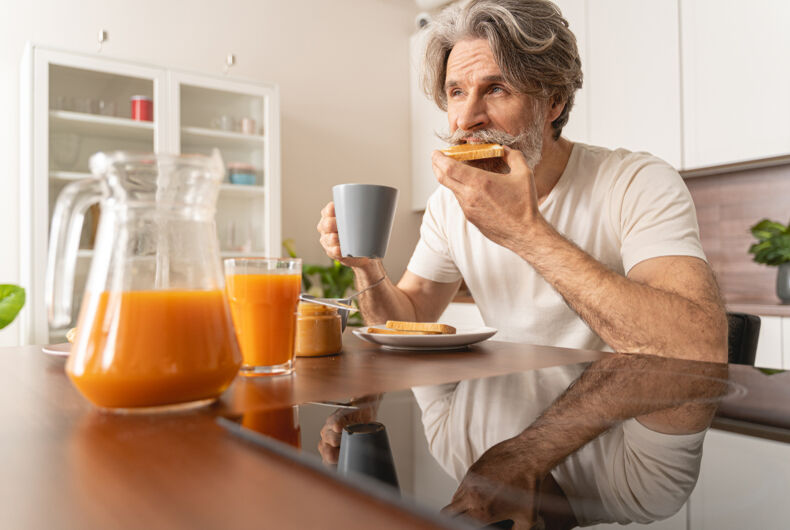 An Australian eHarmony ad has American Christians up in arms because it depicts a gay man eating a piece of toast with peanut butter on it.

Even more scandalous for the pearl-clutching crowd, the “immoral” man has the audacity to hug another man.

One Million Moms, an astroturf group funded by the anti-LGBTQ hate group American Family Association, has sent out a breathless action alert to supporters decrying the matchmaking site’s advertisement, “Here For Real Love.”

“It’s the site’s attempt to normalize and glorify the LGBTQ lifestyle by featuring a homosexual couple hugging, feeding each other, and wiping the other one’s mouth,” group leader Monica Cole wrote in the email. “By promoting same sex relationships, eharmony wants to make it clear where they stand on this controversial topic instead of remaining neutral in the culture war.”

“There is concern about the way this advertisement is pushing the LGBTQ agenda, but an even greater concern is that the commercial is airing when children are likely watching television.”

“This eharmony ad brainwashes children and adults by desensitizing them and convincing them that homosexuality is natural, when in reality it is an unnatural love that is forbidden by Scripture just like love rooted in adultery is forbidden,” she continued.

Someone grab the smelling salts. They. Ate. Peanut. Butter. And. Touched.

The real sin in this spot is only putting peanut butter on half of the piece of bread. Who does that?

9 inspiring photos to help you transition from female to male