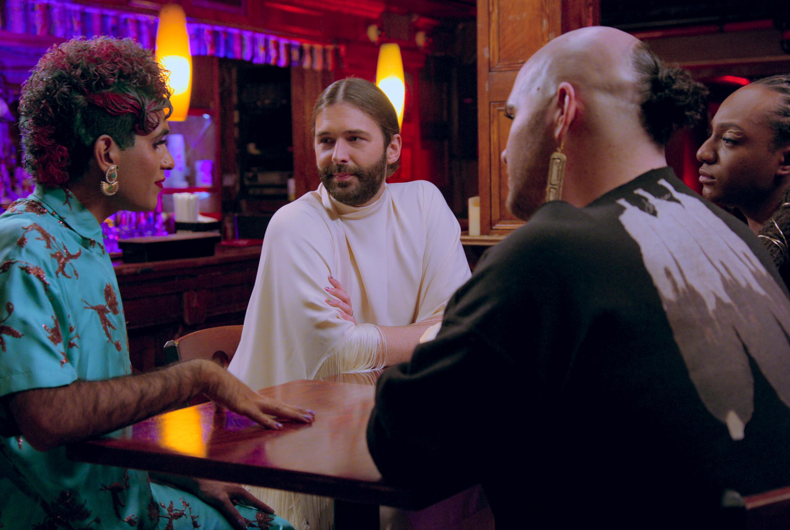 Jonathan Van Ness meets with activists to talk about saying "bye bye" to the binary.Photo: Netflix

Netflix’s new show Getting Curious with Jonathan Van Ness premiers this Friday and LGBTQ Nation is bringing you an exclusive clip from the show. The star lets his curiosity lead the way as he roves from wigs to bugs, to skyscrapers and gender expression in this new series chock-full of experts and special guests.

And in one episode, “Can We Say Bye-Bye To The Binary?,” former LGBTQ Nation Hero nominee Alok Vaid-Menon joins the conversation.

Vaid-Menon is an influential author, performer, and personality who constantly explains why we need to degender fashion and think beyond the gender binary. In other words, the perfect person for Jonathan to talk with to find out more about the gender binary.

“There’s a profound disconnect between the ways that society speaks about gender non-conforming people and the reality of our lives,” Vaid-Menon told LGBTQ Nation. “This episode is a necessary intervention where we finally hear from gender non-conforming people on our own terms. I hope it will teach people more about how a world beyond the gender binary helps everyone.”

“I was surprised at how much I learned through this episode. It is a joyful exploration of the way that gender intersects with history, racial justice, spirituality and so much more,” Van Ness added.

In this quick clip from the episode, the two dive into why systems of power are threatened by gender nonconformity.