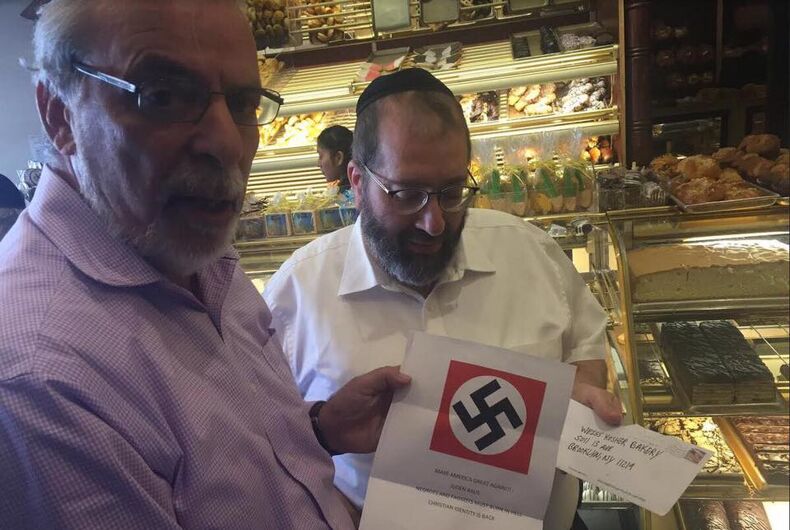 Employees at Weiss Bakery in Brooklyn display a threatening message sent to the business by neo-Nazis.Photo: Blimi Marcus/Facebook

“Every time some anti-White, anti-American, anti-freedom event takes place, you look at it, and it’s Jews behind it.”

Related: Meet the trans folk who found acceptance after embracing their surgery scars

Fliers depicted a photo of Kavanaugh surrounded by distorted caricatures of Jewish United States Senate members, including Diane Feinstein and Chuck Schumer, with Stars of David branded on their foreheads. The fliers also included Jewish billionaire, George Soros, whom the political right unjustly branded for funding anti-Kavanaugh opposition, allegedly paying protesters, and funding the so-called “migrant caravan” (group of asylum seekers) then inching its way toward the U.S. southern border.

Approximately one hour after police captured a man in 2018 who was suspected of sending approximately 15 pipe bombs through the mail to prominent Democrats, an anonymous man phoned my home, someone who apparently knew I am a professor, who spouted, “Hey, how can I donate to your university, you Jew Kike.”

I immediately hung up the phone, but he called me back and I did not answer his second attempt to discharge his message of hate.

One day later my heart broke as I watched TV reports of a shooter who entered the Tree of Life Synagogue in Pittsburgh, Pennsylvania killing at least 11 people and wounding several others, including four police officers. The shooter was said to have ties to neo-Nazi white supremacist organizations and reportedly shouted during his carnage that “Jews must die!”

As a fairly visible writer, I have gotten many antisemitic and homophobic threats through the years, some anonymous, some not. I am a proud Jewish and queer person, and I truly value my identity positionalities.

I have been involved in the struggle for civil and human rights most of my life, and I declared to myself long ago that the cause is just and that I would never shrink from the battles and never allow others to intimidate me. That said, while making me somehow stronger and even more committed to working for a socially just society, the venomous insults have taken an emotional toll on my psyche and on my overall self-esteem.

And what are the effects on other members of Jewish communities and especially young people who are progressing through their identity development process? Victims of marginalization and systematic oppression are susceptible to the effects of internalized oppression, whereby they internalize, consciously or unconsciously, attitudes of inferiority.

A Jewish student expressed to me in private that since he came to our campus, he has gone into a “religious closet.” To avoid marginalization by his peers, he tells them that he was raised Methodist because he has often heard other students express cruel anti-Jewish sentiments regarding Hitler and the German Holocaust as well as everyday expressions such as “Don’t Jew me down” (translated as “Don’t cheat me like a Jew”) and “That’s so Jewish” (like “That’s so gay,” both intense put-downs).

The clearly antisemitic fliers posted at the Universities of California at Berkeley and Davis, Vassar, and Marist colleges in New York state announced they are “Brought to you by your local Stormer book club.”

The Anti-Defamation League describes the chapters of the Daily Stormer Book Club as “small crews of young white men who follow and support Andrew Anglin and his neo-Nazi website, the Daily Stormer,” and that “SBC members present themselves as American Nationalists and are part of the alt-right segment of the white supremacist movement.”

Anti-Jewish hatred, while a mainstay of political, religious, and social discourse in the United States, appears nevertheless to be on the rise.

The estimated 1500 neo-Nazi white supremacists blared out this disgusting chant as they marched with their Tiki Torches through the streets of Charlottesville, Virginia, in 2017 during their “Unite the Right” protest rally over the scheduled removal of a statue commemorating Civil War General Robert E. Lee. This march was reminiscent of similar events held throughout Germany, particularly in Nuremberg during the Nazi era.

So why do people all along the political spectrum, from far left to far right, from self-described “white supremacists” to many people who are otherwise well-intentioned target Jews, many who appear “white,” avoid what anti-semitism is?

The partial answer, stemming from a long and complex history, is that though Jewish people are members of every so-called “race,” even Jews of European heritage (Ashkenazim) have been and still continue to be “racially” othered by some dominant Christian European heritage communities.

For this reason, members of white supremacist and neo-Nazi groups engage in religious, ethnic, and racial bigotry against all groups they consider non-white, including Jews. In other words, anti-Jewish prejudice and discrimination (a.k.a. antisemitism) is a form of racism.

During the Middle Ages, for example, Christians characterized Jews as having tails concealed beneath their garments and as having a peculiar smell. This led to reports that they were in the service of the Devil, that the Devil was their father.

Looking back on the historical emergence of the concept of “race,” critical race theorists remind us that this concept arose concurrently with the advent of European exploration as a justification for conquest and domination of the globe beginning in the 15th century and reaching its apex in the early 20th century.

Geneticists tell us that there is often more variability within a given so-called “race” than between “races,” and that there are no essential genetic markers linked specifically to “race.”

Though biologists and social scientists have proven unequivocally that the concept of “race” is socially constructed, however, this does not negate the very real consequences people face living in societies that maintain racist policies and practices on the individual, interpersonal, institutional, and larger societal levels.

Sometime during the July 4th holiday weekend in 2006, under the cover of darkness as a shield, an individual or group spray-painted a series of hate graffiti throughout the central campus of Iowa State University, including antisemitic, Islamophobic, heterosexist, and misogynistic epithets and symbols:

“ISU = Fags” with an arrow pointing to the ISU Women’s Center, “Dyke Bar” with an arrow pointing to the campus newspaper offices, “Fag Rag” on a building and giving reference to the campus fraternity for gay and bisexual men–“Fag House,” a red circle and diagonal line slashing through the term “Islam,” and painted swastikas throughout campus, among others.

The perpetrator or perpetrators of these criminal acts, in their own distorted way, linked the various spokes on the oppression wheel by targeting lesbian, gay, bisexual, transgender, and queer people, all women, and also all Jews with their swastikas, and Muslims, people of color, and people with disabilities, in fact, anyone seen as “other,” as subaltern, as less than.

The timing of these actions around the 4th of July highlight what has come to be referred to as “The American Dilemma” by economist and sociologist Gunner Myrdal: on one hand, we live in a country built on the idea (though not always the reality) of inclusion, freedom, and justice for all people, but ironically, on the other hand, racial animus prevails, and on the birthday of that country, an individual or group attempted to exclude other people from participating in this freedom and this justice.

Protestors will not be charged for posting photo taken outside of J.K. Rowling’s home