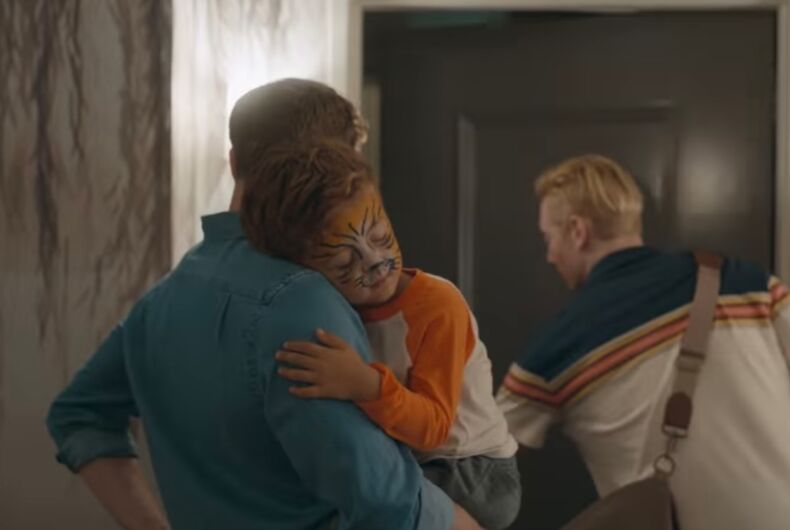 One Million Moms, an evangelical astroturf group funded by the American Family Association (AFA) — which is a certified anti-LGBTQ hate group — is now attacking the Hilton brand of hotels for a 15-second spot advertisement promoting their new mobile app, because it featured two dads quietly carrying a sleeping toddler to their hotel room.

The supposed group, reportedly led by sole employee Monica Cole, calls the ad “inappropriate on so many levels and is clearly attempting to desensitize viewers.” One Million Moms has launched an e-petition “urging Hilton to pull its “Two Gay Dads” commercial immediately,” but unlike most of their other “campaigns” against pro-LGBTQ businesses, they did not pledge a boycott or threaten any further action if they don’t.

In an email blast sent this week, Cole wrote to readers, “Hilton’s current commercial ‘Make an Entrance with the Hilton App’ attempts to normalize sin by featuring two men together with a young boy. The two dads are shown walking through the hotel lobby and to their room while one dad carries the sleeping toddler.”

Cole says this is “Hilton wants to make it clear where they stand on this controversial topic, instead of remaining neutral in the culture war,” a line she has proclaimed in previous “campaigns.”

Cole also repeats past claims that her organization is out to “stand up for biblical truth,” citing biblical verse Romans 1:26-27, which pledges people who engage in sexual lust will receive “penalty” for their “error.”

“Romans 1:26-27 is very clear about this particular type of sexual perversion,” she warns again. “There is concern about the way this advertisement is pushing the LGBTQ agenda, but an even greater concern is that the commercial is airing when children are likely to be watching television.”

The 15-second ad, published by Hilton in September 2021, simply features two dads — one carrying a sleeping child — past a desk attendant signaling to stay quiet as they enter their hotel room, checking in with Hilton’s new mobile application. A narrator states, “At Hilton, check in, choose your room, and unlock your door — all in the Hilton app, thus preserving the rarest of species: the sleeping toddler.”

One Million Moms regularly decries “cancel culture,” while launching continuous nonstop “boycotts” of various companies that offend their delicate sensibilities. The boycotts consist of launching “petition” campaigns, requesting people fill out a generic contact form on their page and sign up for the group’s emails as a form of protest.

Currently, their website claims to have 11,000 signees demanding Hilton “stick to promoting your company, without making political and social statements.” While the e-petition doesn’t ask readers to pledge not to support Hilton brands, the attached message that signees agree to reads, “I’m not buying into your social agenda to push the gay lifestyle and redefine family.”

The AFA has notably expressed outrage at an ad by Hilton Hotels in 2016, which was published in Travel + Leisure Magazine. At the time, Hilton responded to their demands that the company remain “family friendly” with a statement reading, “Hilton Worldwide is a global company of diverse cultures serving diverse guests…We are proud to depict and reflect our guest diversity in our advertising.”

In 2021, they denounced Gillette because of videos released by the company promoting their Gillette Venus line of razors and other products specifically made for shaving pubic hair. The video One Million Moms describes in their call for boycotting the company is a tutorial, not an ad, but they still said it was “obscene” and “inappropriate” to depict women shaving.

Then, last month, they called for a boycott of Sephora because a holiday ad of theirs doesn’t only feature women, which is their “primary customer base.”

The other recently launched “campaigns” by Cole and the AFA are against Sepagainst a mattress company that showed several same-sex pairs using their product in an ad,  Sonic Drive-In for featuring a commercial with people who don’t wear bras, Eli Lilly and Company for promoting diversity and equality, Etsy for allowing people to sell art or dolls on their site, and General Motors for promoting electric cars.

In 2019, One Million Moms infamously caused Hallmark to ban an ad temporarily because it featured a lesbian couple, before the company’s management stepped in and did a 180.

Since then, Cole and the AFA have made pushes against all sorts of brands that dared show support for LGBTQ people. Whether it was cartoons with dogs, dishwashing liquid, fruit, hummus, Oreos, movies with cyclops, or wrapping paper, the One Million Moms group has been there, trying to cancel anyone who dares recognize the existence of LGBTQ people.