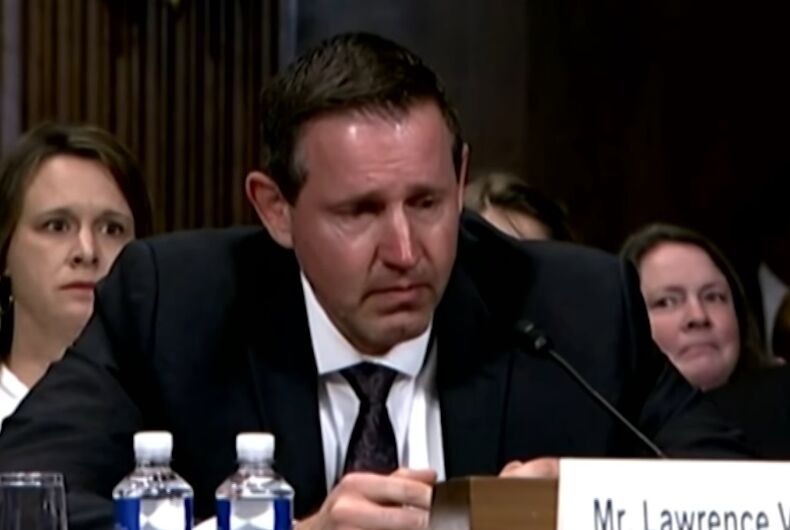 Trump-appointed Ninth Circuit Court Judge Lawrence VanDyke broke down in tears during his confirmation hearing in 2019 when he was confronted with his anti-LGBTQ past and his colleagues said he was “arrogant, lazy, an ideologue, and lacking in knowledge.”

The Republican Senate at the time still confirmed him, and now he’s insulting, attacking, and generally annoying his peers with his aggressive legal opinions full of personal insults.

Related: Trump’s most extreme anti-LGBTQ judicial nominee may be confirmed this week

For example, he wrote for a three-judge panel in case where a gun rights group argued that a county’s COVID restrictions violated the Second Amendment (because people couldn’t go to stores to buy guns). Then he wrote a concurring opinion to disagree with his own majority opinion, saying that other judges who weren’t on the panel would disagree with him.

“I’m not a prophet, but since this panel just enforced the Second Amendment, and this is the Ninth Circuit, this ruling will almost certainly face an” appeal to the full court, he wrote. “To better explain the reasoning and assumptions behind this type of analysis, my ‘alternative’ draft below will contain footnotes that offer further elaboration (think of them as ‘thought-bubbles’).”

“The path is well-worn, and in a few easy steps any firearms regulation, no matter how draconic [sic], can earn this circuit’s stamp of approval.”

VanDyke was a former solicitor general of Nevada and Montana before Donald Trump nominated him to be one of the most powerful judges in the country, after the Supreme Court justices. The American Bar Association opposed his confirmation, writing that his colleagues said he was “arrogant, lazy, an ideologue, and lacking in knowledge of the day-to-day practice including procedural rules.”

They also pointed out that VanDyke might not be “fair to persons who are gay, lesbian, or otherwise part of the LGBTQ community” because he refused to even say that he would be “fair to any litigant before him, notably members of the LGBTQ community.” They cited his writings in the past, where he said that “gay rights cannot always trump religious liberty” in a religious exemptions case and that he was “so happy” to help an anti-LGBTQ college club get funding from a university (the Christian club later lost their case).

He previously did pro-bono work for the anti-LGBTQ hate group Alliance Defending Freedom.

Sen. Josh Hawley (R-MO) asked him about the accusations of homophobia during his confirmation hearing, and he started crying.

“It is a fundamental belief that all people are created in the image of God,” he said. “They should all be treated with dignity and respect, senator.”

“I would not have allowed myself to have been nominated for this position if I did not think I could do that, including members of the LGBT community and any other community that has been historically disadvantaged in this country.”

In a case about a virtual ban on high capacity magazines, he dissented from the court’s opinion and whined about it: “The majority of our court distrusts gun owners and thinks the Second Amendment is a vestigial organ of their living constitution.”

He then wrote that mass shootings are too rare to care about and said his colleagues can’t understand why people would want weapons capable of conducting mass shootings because federal judges “have armed security protecting their workplace, home security systems supplied at taxpayer expense, and the ability to call an armed marshal to their upper-middle class home whenever they feel the whiff of a threat.”

Judge Andrew Hurwitz, another judge on the Ninth Circuit Court of Appeals, said that VanDyke’s “language is no more appropriate… than would be a statement by the majority that today’s dissenters are willing to rewrite the Constitution because of their personal infatuation with firearms.” He pointed out that a judge in the Ninth Circuit actually died in a mass shooting and that VanDyke’s insults “neither advances our discourse nor gives intellectual support to the legal positions argued by my respected dissenting colleagues.”

As The New Republic’s Matt Ford points out, despite Hurwitz using the plural there, no one actually joined VanDyke’s dissenting opinion so Hurwitz was really just referring to him.

“VanDyke’s venomous style comes as the federal appellate courts are increasingly split along partisan lines,” Ford wrote. “But ascribing his behavior to a broader trend among federal judges may let him off the hook too easily. He is still, in this polarized age, a truly exceptional case.”