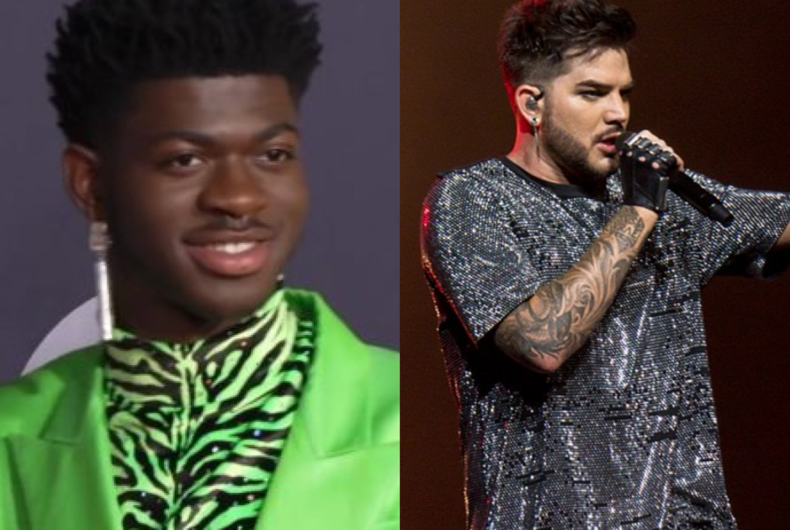 In a recent sit-down, Adam Lambert praised Lil Nas X for being “a proper pop star at this point, lots of hits, streams, eyes on him.”

The out entertainers have a few things in common: both saw commercial success after coming out, both have faced backlash for their identity and flamboyant style, and both are known for provocative live television performances.

Lambert’s comments were published in the cover article for Attitude Magazine‘s February 2022 print edition, with an interview conducted by another out icon and veteran musician, Boy George.

Lambert said that Nas is “moving the needle” on gender and sexuality, although “There’s a lot of work to be done.”

“Not only that, but he’s pushing it,” Lambert continued. “He’s not afraid of controversy, to get in people’s faces, challenge people. He’s on Twitter, clapping back. It’s brilliant, funny, irreverent, confident…

“Who does that remind me of?” he quipped, in reference to Boy George himself.

Although Lambert had a ten-year start on Nas, becoming a national star as a competitor on the eighth season of American Idol and also becoming the first out pop singer to achieve a number one album on the Billboard 200, Nas has also broken several barriers for LGBTQ music artists less than three years after coming out.

Lambert, also touring with Queen’s Brian May and Roger Taylor under the band name Queen + Adam Lambert, dished about trying to write music with the two musicians, but May “suddenly lost interest.”

“I just think it’s high time we had somebody out there being exactly who they are,” he said to Gay Times in 2021. “The thing I love about what he’s doing is not just to say the statistic of a queer person having this many streams and all that, but I also love the tone of what he’s doing. It’s finally challenging the double standards.”

He added, “What Lil Nas X is doing is being a rockstar about it. He’s being subversive and it’s great.”

Editor’s Note: This article previously misidentified one of the members of Queen as “Deacon Taylor,” instead of Roger Taylor. We apologize for the error.