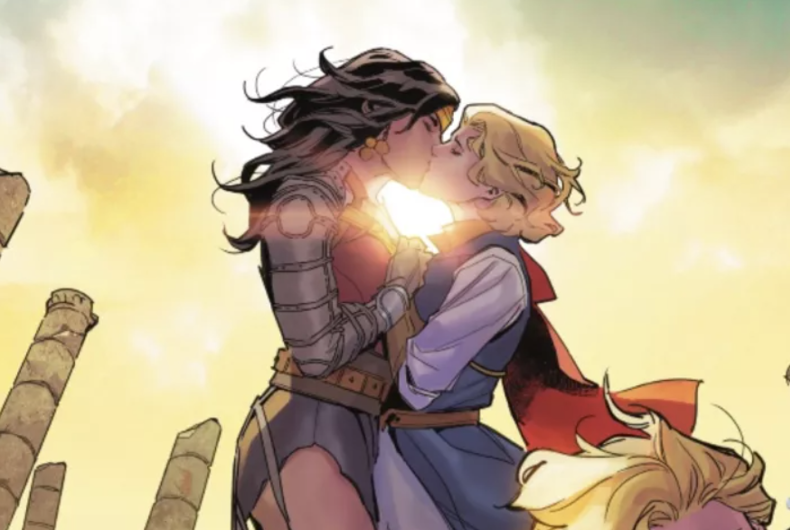 In the new limited series, Dark Knights of Steel, Wonder Woman is engaged in a passionate romance with another woman.

Related: Cameron Bess will become the first out pansexual person to go to space

The series reimagines the superhero universe in medieval times. In the second issue, Lois Lane visits the island of the Amazons to share that the father of a new DC Comics character, Princess Zala-El, has has been murdered.

Wonder Woman is with Zala when she hears the news of her father’s death and immediately comforts her. The pair then share a romantic kiss.

According to Screen Rant, Zala will play a key role in the rest of the series. In a rage of grief over her father’s death, she murders the son of Black Lightning and starts a war.

While Wonder Woman, also known as Diana Prince, has long been considered a queer character, her actual romances with women have been few and far between.

In 2016, however, the writer of Wonder Woman’s Rebirth series, Greg Rucka, confirmed her sexuality in an interview with Comicosity.

“Now, are we saying Diana has been in love and had relationships with other women? As [artist] Nicola [Scott] and I approach it, the answer is obviously yes,” Rucka said.

Rucka went on to explain that the Amazons of course engage in same-sex relationships, as they live on an island of all women.

Wonder Woman’s relationship with Zala comes only two months after DC Comics announced that its new Superman is bisexual.

In Superman: Son of Kal-El, 17-year-old Jon Kent, the son of Clark Kent and Lois Lane and the star of the new series, begins a romantic relationship with journalist Jay Nakamura.