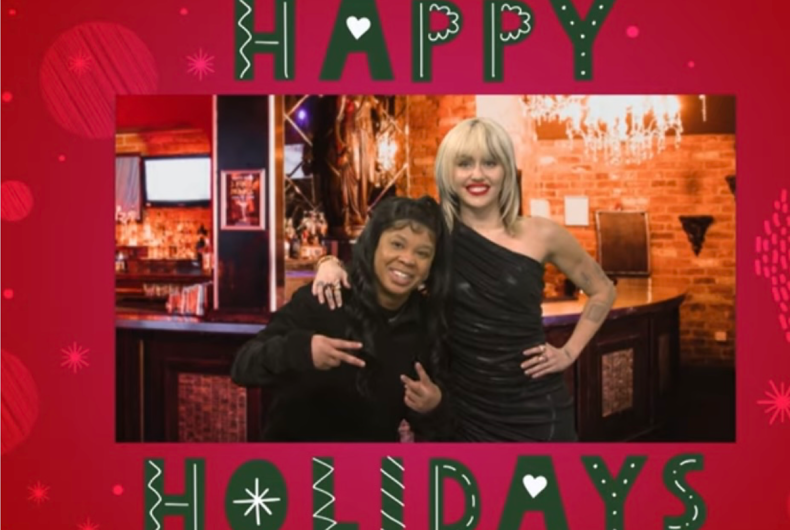 The show opened with a Christmas message from Dr. Anthony Fauci, played by out SNL cast member Kate McKinnon. The message included an appearance from gun-toting, QAnon-supporting Congresswomen Marjorie Taylor Greene and Lauren Boebert — and it only got funnier from there.

In the opening sketch, Dr. Fauci’s Christmas message included the “CDC players” acting out different scenarios that may arise from current pandemic restrictions, such as a business man (Bowen Yang) trying to join the “Mile High club.”

Then, to emphasize how coronavirus has had economic implications as well, Fauci introduces “two brothers who are unemployed” now: former New York Gov. Andrew Cuomo (played by Pete Davidson) and his brother, ex CNN host Chris Cuomo (played by Andrew Dismukes). Both attempt to blame the loss of their jobs to coronavirus, and not their responses to allegations of sexual harassment against Andrew.

“This country is divided, but I think we can agree on at least a few things,” Fauci says. One of them? “The Fox News Christmas Tree Arsonist must be executed,” Greene says.

Another sketch from the show features a couple (played by Melissa Villaseñor and Alex Moffat) marveling at the various Christmas cards they’ve received.

One of the cards is from Pierce and Leonard (played by Kenan Thompson and Bowen Yang), the “well-off middle-aged gay couple your wife is friends with, that’s always dressed to the nines and holding our gross, little, old dog that you can’t believe is still alive.”

Another is from Ruth (played by out featured player Punkie Johnson), who sends a card with a photo of her next to Miley Cyrus. They’re not actually friends, but Ruth wants to “remind you that I met a celebrity at a restaurant eleven months ago.”

Cyrus explains, “This woman came up to me and said, ‘you’re Hannah Montana,’ and then said that she hated my music.”

She also added, “She asked for a photo, and implied if I didn’t take it, it was because I was racist.”

One card is from “your mom’s single friend who has looked 52 years old since you were a baby,” played by Kate McKinnon.

“What’s my deal? Am I a lesbian or a wealthy widow? You don’t care enough to ask your mother, so you’ll never know!” she explains.

Michael Che reads a report that alleges Vice President Kamala Harris doesn’t read briefing material and is unprepared for meetings, to which he responds, “Wow, it feels really amazing to finally see someone in the White House who’s just like me.”

Later in the segment, Johnson comes out to discuss what it’s like visiting her family for Christmas down in New Orleans with Che.

However, she veers off topic to complain about one “shady” uncle, who brings nothing to the holidays but “judgement.”

The uncle still can’t believe she is gay and asks, “how do you expect to make a baby then?”

Johnson says she does want a child, but doesn’t want a daughter. Why? “What if she turns out straight?” she asks, visibly grimacing at the notion of her daughter bringing a man home.

“Bitch, I ain’t raise you like that! Where you learn that nonsense?” Johnson hypothetically says. “If I’m gay, and your momma gay, then you gay!”

In another sketch, we see various short videos one may come across while scrolling on the social app TikTok.

One includes Finneas O’Connell reminding viewers of a “throwback” for the “old heads” out there, “Old Town Road” by Lil Nas X, which was the out rapper’s debut hit all the way back in 2019.

Another recorded sketch is an ad, showing a teen girl named Julie (played by Eilish) seeing an elderly, lonely looking woman (played by McKinnon) across the street from their apartment, and inviting her over through written signs to join them for Christmas dinner.

The invitation soon becomes regrettable, especially after McKinnon’s character flashes Eilish’s. The whole thing turns out to be an ad for Nextdoor: “This holiday season, know thy neighbor before you love thy neighbor.”

Next week’s episode, the last of 2021, will feature actor Paul Rudd as host and Charli XCX as musical guest.

Another Duggar sibling is facing criminal charges for offenses against children