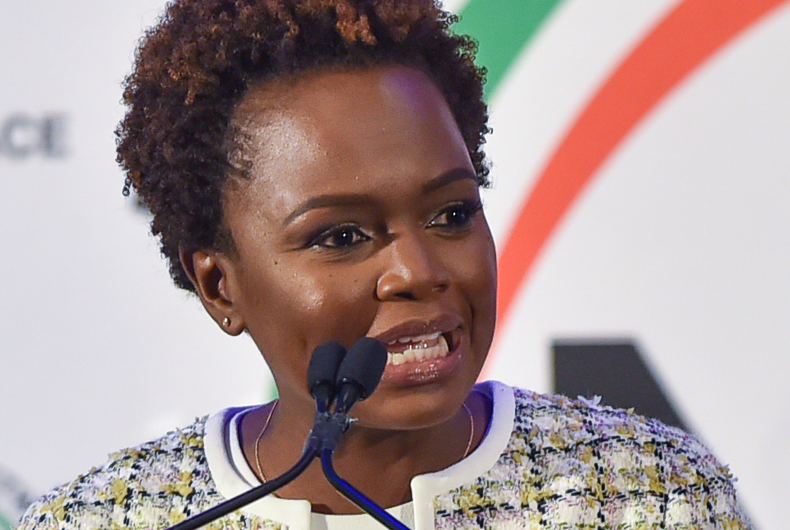 Out Principal Deputy White House Press Secretary Karine Jean-Pierre called out Republicans for their glee at increased inflation, which they plan to use to win races in the 2022 midterm elections.

A reporter asked her at yesterday’s White House press briefing about how President Joe Biden views the prospects for the Build Back Better Act, which the administration had hoped to pass by the end of this year. Biden said yesterday that the bill may have to wait for the new year.

“I believe that we will bridge our differences and advance the Build Back Better plan, even in the face of fierce Republican opposition,” he said in a statement.

Jean-Pierre first told the press corps to “step back for a second and look at the big picture,” which is that Biden is “working with two of the narrowest majorities possible” in Congress but has still “passed several of the most impactful economic legislation in American history… turned around a failing COVID response and a sputtering economy.”

“Meanwhile, Republicans are actively seeking to hurt the pandemic response, explicitly rooting for inflation to get worse,” she said. “And so, they are — they are blocking what we’re trying to do for the American people, which is bringing down the cost and doing the work on behalf of the American people.”

Jean-Pierre: "Republicans are actively seeking to hurt the pandemic response, explicitly rooting for inflation to get worse." pic.twitter.com/UnPCn27TVK

Jean-Pierre was referring to Republicans like Sen. Rick Scott (R-FL) who said last month, “This is a gold mine for us,” when discussing how the GOP plans to use inflation as a campaign issue next year.

Inflation has historically “been a very popular issue for the GOP,” Princeton political historian Julian Zelizer told USA Today. “It’s always been used, even when presidents are doing things that are popular.”

The U.S. has experienced mild inflation since just after the end of the Trump administration. Annualized inflation was 6.8% in November; far from the 50% monthly – or 12,974% annual – rate generally accepted by economists as the definition of hyperinflation, but higher than the under-2% inflation that the U.S. dollar has experienced for the past several decades. Core inflation was lower, at 4.9%.

The Federal Reserve Bank – historically hawkish on inflation – hasn’t even started to raise interest rates to lower inflation because they believe it’s transitory, the effect of an economy returning to normal after the worst of the pandemic last year, as well as volatile gas prices. Annualized inflation rates calculated this year compare 2021 to 2020, when the economy was temporarily – and massively – reduced in size due to the pandemic.

Some experts point out that the Republican strategy requires inflation to remain an issue for months to come.

“I don’t think we’re going to be talking about inflation a year from now,” said George W. Bush administration Treasury official Tony Fratto. “I think inflation is going to come down.”

Liberals argue that the Build Back Better Act would help Americans who are struggling to pay bills in the face of inflation by, for example, easing the costs of child care and early childhood education for parents and helping seniors pay for medications. The funds, they argue, will be spent over several years and therefore aren’t expected to immediately add to inflation