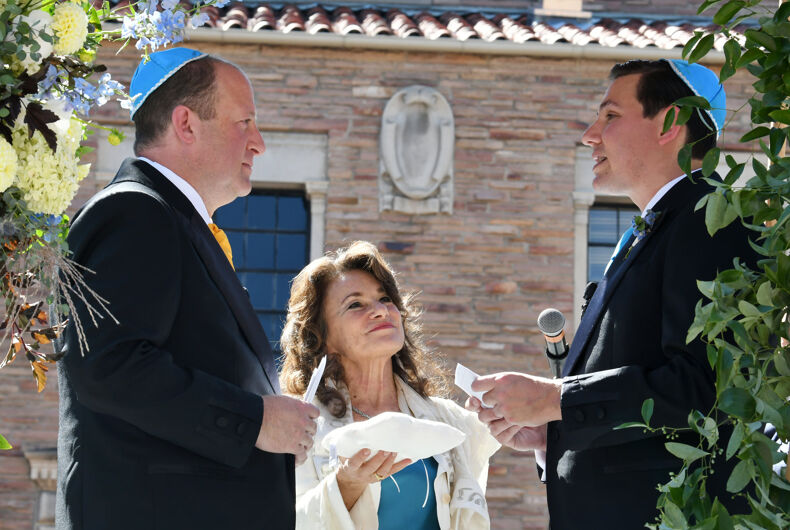 Moreover, she claims that Polis’s marriage to his husband Marlon Reis was “a sham” to get gay people to vote for him for governor.

Neuschwanger made the bizarre claims at a meet-and-greet in Canon City, Colorado earlier this week, the Colorado Times Recorder reports. She talked about a variety of topics, from the COVID-19 vaccines to government secrets about the Kennedy assassination to gay couples adopting, before she turned her attention to Polis.

“You guys want to know something crazy about Polis? He’s not even gay,” she said, in audio captured by an attendee.

“I didn’t know any of this until, like, we got involved in politics,” she continued. “So, his real name is Jared Schutz, and he was married to a woman, who he used to abuse the heck out of.”

She said that Polis sexually assaulted a woman and then changed his name from Schutz to Polis. She also said he got involved in politics at the behest of “Tom Gill” (she was probably referring to gay billionaire Tim Gill), who “figured out the way to get the gays in Colorado was to have someone run for governor who is gay. So, right before this happened, they told Jared Polis he had to get divorced.”

“Well, everyone said, when he was running for governor, no one knew he was gay,” she continued. “But all of a sudden, right before he won, he came out as the first Jewish gay guy in Colorado. He’s not actually gay! So then, they bring in Marlon — and, you know, have you ever seen him and Marlon have public displays of affection, hold hands, kiss, hug?”

She said that Polis and his head of security “sneak prostitutes in and out of his apartment in Boulder all the time, and they have swingers’ parties and all kinds of things. He’s not gay! When we heard this, I was like, ‘You’re kidding me!'”

Neuschwanger then claimed that Polis is the cousin of California Gov. Gavin Newsom (D). Someone in the audience asked if Polis is “Pelosi-related” and she said “Yes, yeah,” referring to House Speaker Nancy Pelosi (D-CA).

Someone else asked if Polis is “Soros funded” – referring to Jewish philanthropist George Soros who is often at the center of anti-Semitic rightwing conspiracy theories – and Neuschwanger said “Yeah” and claimed that Polis has received a campaign contribution from Soros.

“But it gets even better: his whole marriage to Marlon was supposed to be part of his reelection campaign in Colorado, but COVID shut it down, hence they only did that little private ceremony when [President Joe] Biden was out so that they could time Biden’s sensationalized media when he came to Colorado to be at Polis’ wedding. And they never even kissed at their wedding. It’s all a sham.”

“I really want to put him in a jail cell,” she said.

Neuschwanger’s story doesn’t square with even the most basic facts available on Polis’s Wikipedia page, or the memories of LGBTQ journalists who have been covering out elected officials for decades. Polis was first elected to Congress in 2008 – years before he’d become governor – and later made history as the first out gay parent to be a member of Congress.

While he and Reis got married in 2021 after a COVID scare, they met in 2002, the same period during which Polis was serving on the State Board of Education and years before marriage equality was legalized in Colorado. People were well aware of who Reis was when Polis was in Congress; they had kids in 2011 and 2014.

There is no evidence that Joe Biden attended their wedding, that Polis is related to either Pelosi or Newsom, that Polis sexually assaulted a woman before he decided to pretend to be gay, that he abused a former wife or that he even had a wife, or that Tim Gill pushed Polis to pretend to be gay so that he could run for governor.

She is correct in that Polis is Jewish and his name was “Schutz” when he was younger. He changed his last name to his mother’s when he was 25 and kept his father’s last name as his middle name.

“I stand by this statement in its entirety,” Neuschwanger said in a statement after audio of her speech leaked to the press. “As I mentioned I have never been in politics and didn’t know any of this information, never even thought to ever ask these types of questions until I started campaigning. … The truth is that we have been told this numerous times across the state from people who are on both party fences and know Polis personally.”

“Now I am probably the black sheep of the Republican Party because I do openly support the LGBTQ community but this has been a hot topic for me. Therefore is this was all a scheme to get elected, well he has some explaining to do and he should be held accountable for those falsehoods.”

Polis is not commenting on Neuschwanger’s claims.