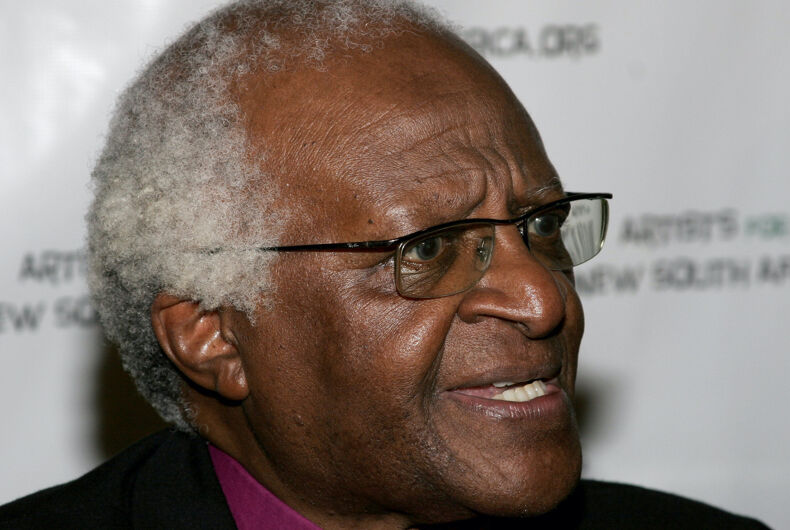 Archbishop Desmond Tutu, the Nobel Peace Prize laureate and fighter of apartheid, died on Sunday at the age of 90.

Though he was best known as a religious leader who tirelessly fought to overturn South Africa’s system of institutionalized racism (known as apartheid), he also spoke out for LGBTQ equality. In fact, he once said that he’d rather go to Hell than worship a homophobic God.

Related: Pride in Pictures: Johannesburg’s Pride parade is the biggest in Africa & there’s a reason why

In July 2013, Tutu raised eyebrows when he said, “I would refuse to go to a homophobic heaven. ‘No,’ I would say. ‘Sorry, I mean, I would much rather go to the other place.'” He made his comments at a public event launching the United Nations’ Free and Equal campaign for LGBTQ equality.

“I would not worship a God who is homophobic and that is how deeply I feel about this,” he continued.

Then, speaking out against anti-LGBTQ discrimination and violence, he added, “I cannot keep quiet when people are penalized for something about which they can do nothing. I am as passionate about this campaign as I ever was about apartheid. For me, it is at the same level.”

His stance in support of queer rights put him at opposition with many other Africans and Anglican church leaders. But his voice also gave the global LGBTQ community an influential ally.

In the foreword to a book by Gene Robinson, the man who became the U.S. Episcopal Church’s first openly gay bishop in 2003, Tutu apologized for the “cruelty and injustice” of Anglicans towards the LGBTQ community.

This week, Robinson remembered Tutu for his radical empathy. “[Tutu used his own experience of oppression] as a window into what it was like to be a woman, what it was like to be someone in a wheelchair or for someone to [be] LGBTQ or whatever it was,” Robinson told the Associated Press. “It was the thing that taught him to be compassionate.”

Consensual same-sex relationships remain illegal in 34 African countries. Many of the countries have anti-LGBTQ laws as a result of European colonialism and others have implemented harsher anti-LGBTQ laws due to ultra-conservative Christian and Islamic extremist influences.

His daughter, fellow Anglican minister Mpho Tutu van Furth, resigned from her religious post in 2016 because the South African Anglican Church refused to recognize her marriage to a woman. She said she chose to resign rather than let religious leaders try to strip her of her duties.

In 2020, his daughter continued his work for LGBTQ dignity by issuing a call amongst 400 religious figures to ban conversion therapy and all laws criminalizing same-sex relations worldwide.