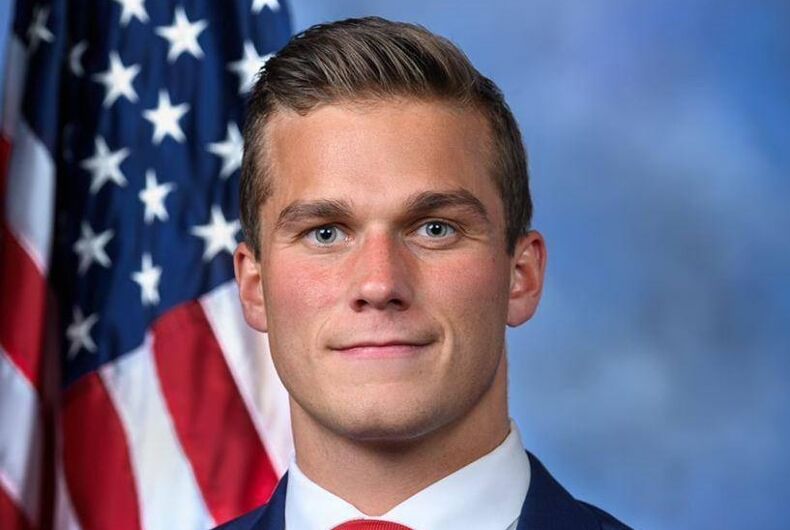 In a speech on the House floor advocating against abortion rights, Rep. Madison Cawthorn (R-NC) compared pregnancy to taking a picture of a sunset with a Polaroid camera, then compared abortion to ripping the picture up before it is developed.

Cawthorn, who has been accused of sexual harassment by multiple women this year, presented a scenario imagined by someone else that shows that the right to access abortions allowed by Roe v. Wade are “a silent genocide [that] has slipped under the conscience of America.”

Related: Lauren Boebert challenges Congressman who uses a wheelchair to a footrace

During a session in the House this week, Cawthorn asked House Speaker Nancy Pelosi (D), who was presiding over the Floor during the debate, to “imagine you’ve just walked out of this chamber, and outside is a gorgeous sunset. You have a Polaroid camera and you snap a beautiful picture, and a great photo prints out the front.

“You hold it and shake it, waiting for the picture to appear, but suddenly someone walks by and snatches your photo, ripping it to shreds,” he suggests.

“You’re stunned.. You cry, ‘Why did you destroy my picture?’ The person replies, ‘oh, it wasn’t a picture. It wasn’t fully developed yet,'” he suggests. “All of us in this room realize how asinine that reasoning is. That photo was transforming into a beautiful image.”

Cawthorn says, “This illustration… is simple, but it’s what our nation has done to the most precious image of all, the image of God.”

He claims that because abortions take away “precious works of art… eternal souls woven into Earthen vessels,” that “One day, perhaps when science darkens the soul of the left, our nation will repent.”

He concludes by declaring, “I hope the Supreme Court overturns Roe v. Wade. I hope that we stop the genocide of abortion in this country.”

A silent genocide has slipped beneath the conscience of America.

Eternal souls, woven into earthen vessels, sanctified by Almighty God, and endowed with the miracle of life are denied their birth by a nation born of freedom. pic.twitter.com/XhVhkFoirX

Oxford University academic Dr. Jennifer Cassidy called the speech “Truly one of the most disturbing things I’ve witnessed in a long time.”

Cawthorn defended his remarks by claiming he’s “obviously” referring to fetuses as “Earthen vessels,” and “because the left doesn’t think children in the womb are humans, this doesn’t make sense to them. Sad.”

“Earthen vessels…endowed with the miracle of life are denied their birth by a nation that was born in freedom.”

Obviously referring to a child in the womb, not the mother.

But because the left doesn’t think children in the womb are humans, this doesn’t make sense to them.

Cawthorn routinely makes statements discussing his belief that there is a movement to “completely de-masculate” men and boys, and he has urged mothers to raise their sons “to be a monster.”

He has also made transphobic remarks and opposes LGBTQ rights. During a conservative talk show, he claimed that the LGBTQ movement “is saying that we need to be able to have gender reassignment surgery for 12-year-olds.” Such surgeries are incredibly rare but commonly used as a right-wing scare tactic used to shut down discussions of LGBTQ rights.

In contrast, Cawthorn is being challenged next election by Buncombe County Commissioner Jasmine Beach-Ferrara, an out lesbian. She pledges to vote in favor of abortion rights.

Beach-Ferrara is also a Christian minister, mother of three, and the founder and Executive Director of the Campaign for Southern Equality, which fights for LGBTQ rights across the South. She has a long history of LGBTQ advocacy and played a large role in the fight for marriage equality. She also served on the Biden Foundation’s Advisory Council for Advancing LGBTQ Equality.

“I think part of being an LGBTQ person who is…really proud to be a Southerner is about how we navigate who we are in our public lives, and there has historically been so much pressure for folks to stay closeted or opaque, and my faith teaches me to show you as I am and to try to meet people as they are,” she told LGBTQ Nation in March. “What we’re trying to do is create a campaign where everyone is welcome at the table and everyone can see themselves as a leader in our community.”

She believes Cawthorn has been radicalized by extremists and is now a danger to his constituents and others.

“Cawthorn has trafficked in really reckless and dangerous conspiracy theories,” Beach-Ferrara said. “He helped incite a violent insurrection. He has called for the overturning of election results, and he’s stoking the flames of a lot of division, and what I hear people [in my district] saying is that’s not who we are. It’s not the community we want to be creating, it’s not the future we want to be building together.”

Truly one of the most disturbing things I’ve witnessed in a long time. A Congressman, in a bid to overturn Roe V Wade and deny American women reproductive rights. Publicly referred to them as “Earthen vessels, sanctified by Almighty God.” Give me strength. pic.twitter.com/LvYM46GRVN

That’s one of the many reasons his ridiculous analogy makes no sense. In real life, the woman is the person deciding whether to develop the picture. Madison Cawthorn is the outsider jumping into her business and forcing her to keep the Polaroid for the rest of her life.

“Science darkens the souls of the left”

Religious extremism is our downfall

That photo analogy is just… The dearth of critical thinking on the right + their religious extremism will spell the end of us. https://t.co/74JdZzVayJ

The right to choose hangs in the balance right now. I will be a vote to codify that right into law.