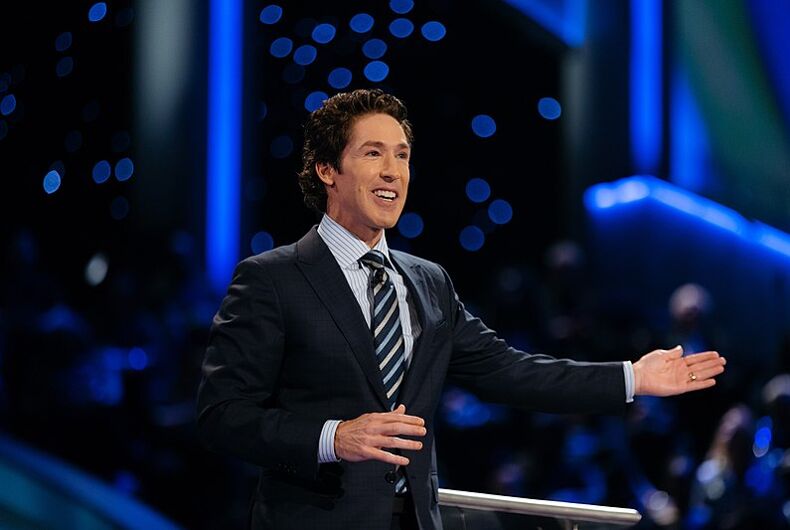 A Texas plumber made a surprise discovery behind the bathroom walls at anti-LGBTQ preacher Joel Osteen’s Houston megachurch: “bags and bags” of stolen cash and checks.

Lakewood Church reported over $600,00 as stolen in 2014, but, despite a $25,000 reward, the money was never recovered. And now that it’s been found, the greedy pastor is stiffing the plumber on the reward.

The man told local news that he works for a large contractor and got a call to fix a loose toilet at the church.

“There was a loose toilet in the wall, and we removed the tile,” he said. “We went to go remove the toilet, and I moved some insulation away and about 500 envelopes fell out of the wall, and I was like ‘Oh wow!’”

“I went ahead and contacted the maintenance supervisor that was there, and I turned it all in,” he said.

Houston Police quickly arrived to investigate, tearing out more of the wall and finding even more envelopes stuffed with stolen cash.

Crimestoppers offered a $25,000 reward but have refused to pay up, saying the money only goes to someone who provides information that leads to an arrest. Finding the stolen money doesn’t qualify.

So far the church hasn’t even bothered to give the plumber so much as a “thank you,” he says, let alone a reward for finding the money.

In 2017, Osteen drew heavy criticism when, in the aftermath of Hurricane Harvey, he refused to open the church’s doors to flooding victims. The church claimed it had flooded too and was unable to place people anywhere inside of its campus-size facilities.

The church finally opened its doors after national outcry.

Osteen preaches the “prosperity gospel,” based on the idea that the more money parishioners give to the church, the more “rewards” they’ll receive from God. It has made him unbelievably rich.

Osteen has a history of anti-LGBTQ comments. “Homosexuality is a sin — I believed it before, and I still believe it now,” he said on CNN in 2011.

In 2010 he was challenged by The View host Joy Behar about his views on gay people. “It’s not a choice pastor! People are born this way and they are what they are,” Behar said.

He responded by comparing gay people to alcoholics and drug users.

Another school shooting happened while you weren’t looking