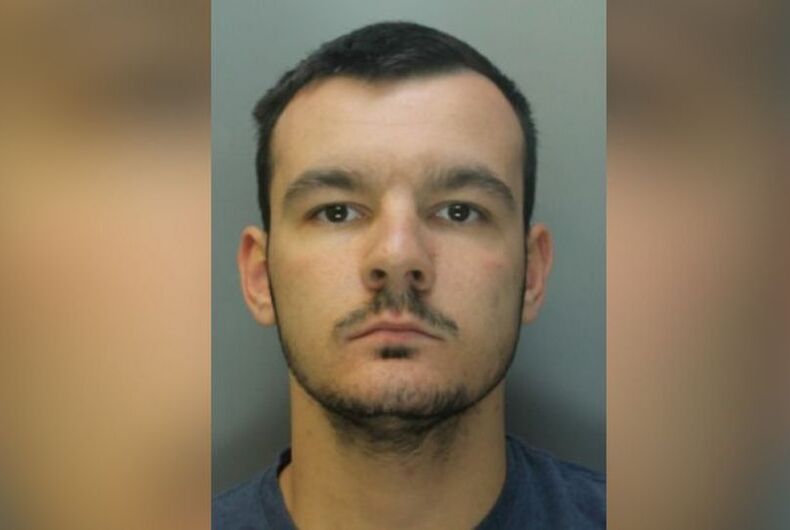 In a case of engrained homophobia combined with toxic masculinity, a man from the United Kingdom who identifies as straight has been sentenced to three years in prison for stabbing a gay man 12 times.

Related: Trump supporter slaps phone out of woman’s hand at airport. It didn’t end well for her.

After he left the party to go home, Taylor reached out to let him know he’d left his phone charger at the friend’s home and offered to return it. The men went inside for drinks after Taylor arrived.

The victim claimed that Taylor reached out and grabbed his penis.

“Bloody hell, Tyson, what are you doing?” the victim testified was his response.

“Don’t you want a bit of fun?” Taylor replied.

The two men laughed before Taylor again grabbed his penis and kissed the victim, who reciprocated the kiss. He testified that he allowed Taylor to perform oral sex on him before the duo went to the bedroom for sex.

But the victim said Taylor wanted a specific type of sex that wasn’t interesting to him. He declined and the men went back to drinking before Taylor demanded the victim reciprocate the oral sex. The victim said he declined.

Taylor, the court heard, grabbed a knife and started stabbing the victim and twisting his penis while repeatedly screaming that he isn’t gay.

“Mr. Taylor was shouting, saying ‘I’m not fucking gay.’ Mr. Taylor was in a rage,” prosecutors said. “He was calling him a ‘fucking faggot’.”

The victim attempted to flee and Taylor chased him into the hallway of his building. The naked men fought and fell down the stairs together.

Taylor fled the scene but was quickly arrested after reports of a naked man running down the street. He told police, “I didn’t do it,” while he was being arrested for public indecency.

Responding officers described the victim as “covered in blood” from numerous stab wounds to his face, chest, and back. His foot was fractured from the fall down the stairs.

Taylor claimed self-defense because the victim hit him in the head with a glass. The other man said he hit Taylor in an attempt to flee the apartment after the attack had already started.

“You were the aggressor at all times, other than when the victim was forced to hit you on the head with the glass,” Judge Garrett Byrne said as he handed down the sentence. “Having seen the CCTV, it shows you are not trying to get out… it shows you detaining the victim in order to continue the attack.”

But Byrne said it was “at least in part motivated by some homophobia, given the remarks attributed to you by the victim, which I conclude you did in fact use.”