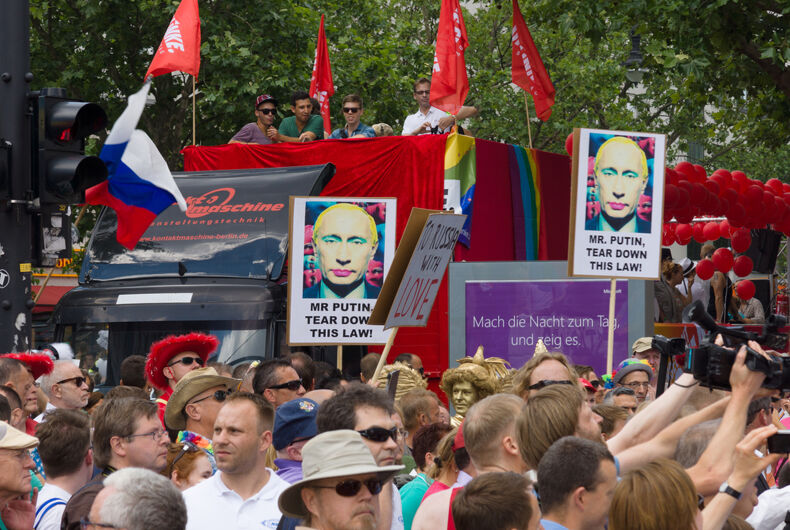 President Joe Biden’s firm stance in favor of LGBTQ rights stands in stark contrast to the other two nation’s leadership.

Russian LGBT Network, lawyer Ivan Pavlov, and four of his former coworkers have been designated as foreign agents by Russia’s government, the latest in a series of measures meant to demonize and persecute LGBTQ citizens. The group, formed in 2006, has 17 chapters around the country.

The group is well known for its successful efforts to rescue gay men from Ukraine and Chechnya where they were being systemically tortured and killed by Russian President Vladimir Putin’s lackeys.

“We don’t know why we have been declared a ‘foreign agent.’ The Russian LGBT Network disagrees with this status,” the group said in a statement, vowing to fight the decree. “We are not involved in political activities, we offer legal and psychological aid (and) defend the rights of the LGBT+ community.”

Pavlov and his colleagues specialize in defending journalists and activists who’ve been accused of treason against the government. They were accused of spreading “undesirable content” about a sham criminal trial involving one of their clients. The government has designated several human rights organizations, journalists, and media outlets as foreign agents recently as Putin works to tighten his grasp on the country.

“We are grateful for all your companionship and support over the years. Please accept our sincere apologies for any inconvenience caused,” the group posted on the popular Chinese social media site WeChat. “There may still be many uncertainties in the future, but we look forward to the day when the clouds have dispersed and we can see the blue sky again.”

The group is similar to Lambda Legal in the United States and files strategic lawsuits aimed at strengthening LGBTQ rights. While other LGBTQ groups remain in China, it was the only one dedicated to changing the legal system.

Earlier this year, WeChat shut down the accounts of numerous LGBTQ activists and groups. Shanghai Pride was canceled and the group said it would no longer host the longstanding event after 11 years.

No explanation was given for the shutdown, but activists said the group had been in trouble with the government for months.

Homosexuality is legal in both Russia and China, but both countries also have laws against “propaganda;” Russia has a law specific to “LGBTQ propaganda.”

Queer adults at much higher risk of suicide