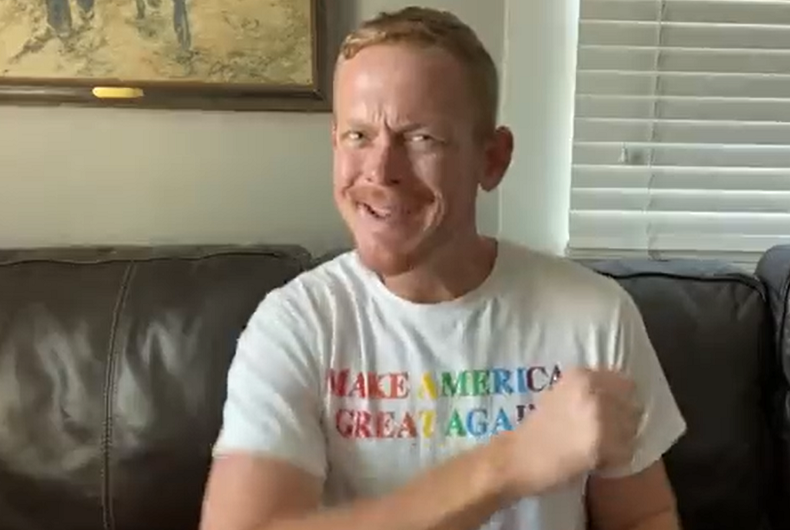 "MAN she made him look GOOD!"Photo: Screenshot

LGBTQ Republicans made a video about their love for Melania Trump that has the internet cringing.

“Let’s be honest: the gays love First Lady Melania Trump!” a man in a rainbow MAGA T-shirt says in the video produced by the Log Cabin Republicans.

“Now don’t get me wrong, we loved President Donald Trump too,” he says, as if there’s some kind of contradiction, “but MAN has she made him look GOOD.”

The video, which features former U.S. Ambassador to Germany Richard Grenell, was made to celebrate the Log Cabin Republicans’ gala in Mar-a-Lago where Melania Trump was presented with their annual “Spirit of Lincoln Award.” They claimed that she had “dedication to our principles.”

But the testimonials in the video are getting more attention than Trump herself. Many speakers, who are almost all white men, go over-the-top with effusive praise of her, many of them just repeating over and over how fashionable she is, because apparently they think “the gays” love fashion more than equal rights.

“She is without a doubt the most fashionable, the most beautiful, the most classy and charismatic and just fashion-forward first lady,” one Republican said, making sure to mention fashion twice.

Clips of Trump play as the Republicans talk, including one that showed her wearing her infamous “I really don’t care, do U?” jacket to visit children who were forcibly separated from their families at the U.S.-Mexico border, which was generally considered a faux pas by people who are capable of caring about kids.

The group declared her “the first Republican first lady to ever support our community,” but the video doesn’t really mention anything that she did to support LGBTQ equality or note that there are first ladies of a certain other party that have shown much more support for LGBTQ rights than she has.

“I’m not so sure where Melania Trump got her passion for equality, but it was there and it was real,” Grenell insists meekly. “Maybe it’s because she’s the most international first lady we’ve ever had, she speaks so many languages.”

She speaks two: English and Slovenian.

Last night, Log Cabin Republicans presented First Lady @MELANIATRUMP with our annual Spirit of Lincoln Award at Mar-a-Lago for her dedication to our principles.

Watch LGBT conservatives explain why the First Lady is a champion and inspiration to our community.

This isn’t the first time that queer Republicans have tried to portray Melania Trump as a gay icon, which she is not.

Last year, she made a last-minute campaign video with the group just before the 2020 elections to tell “gays and lesbians” to vote for her husband, despite his years of attacks on LGBTQ equality.

“I was shocked to discover that some of these powerful people have tried to paint my husband as anti-gay or against equality,” she said, as if she couldn’t understand how the man who threatened to veto the Equality Act because it would require religious employers to treat LGBTQ people equally and arbitrarily banned transgender people from the military would get a reputation for opposing equal rights.

Donald Trump was voted out of office less than a week after that video was released and was replaced by President Joe Biden, the first U.S. president to enter the White House supporting marriage equality.