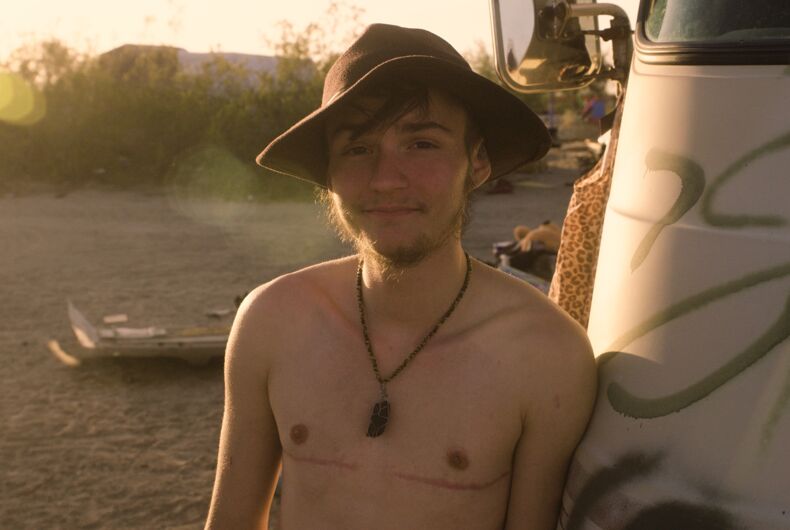 Poe was brutally murdered and police seem to be dragging their feet Photo: Chris Coats

In November 2020, I began filming a documentary in Slab City, California, an off-grid squatter town for nomadic and unhoused people near the Salton Sea. My focus was a living space for queer, trans, and non-binary people, mainly in their 20s and 30s.

In the six months we filmed and lived there, I met so many amazing, brilliant people, one of them being a young trans man known as “Poe” and later as “Legion.” He was 21 and hailed from rural Tennessee. He struggled with mental illness but also had a passion for art, activism, and exploring life in atypical ways.

Related: How stylist Sam Ratelle rose from the streets to “superstar”

In March 2021, Poe came up to me with a concern about our documentary. I assumed he was worried that I would exploit or play up the dark side of Slab City like many have in the past. But it was just the opposite. “We’re worried you’re going to make it look like a utopia,” he said. He wanted to make sure I showed the full range of life on the fringe, the beautiful and the ugly, and I assured him I would.

On May 21st, I learned that Poe had been murdered. He had gone missing around May 6th, unbeknownst to me at the time, and according to authorities was found on May 11th in the Coachella Canal, an irrigation canal that runs through Slab City. He had been brutally stabbed to death.

There are a number of persons of interest in this case but no official suspects. Details from the Imperial County Sherriff are and few and far between because it’s still an open investigation but to many of Poe’s friends and family, not enough is being done.

Potential evidence gathered up in Oregon in June took nearly a month-and-a-half to be delivered to a lab in San Diego. It’s still sitting there waiting to be analyzed, on the lowest priority while a murderer runs free. When I asked if it would be faster if Poe’s family were rich or powerful, an official with the sheriff flatly said “yes.”

Vital fingerprints were never dusted for, other bits of potential evidence never collected, and some leads never followed. I’ve tracked this case inside-and-out from the beginning and while I know blame will always lay on authorities, the truth is that when a homeless trans kid is murdered, it will never be a high priority.

Since May, I’ve continued filming not only the investigation but the effect of this tragedy on Poe’s family and community. While hesitant at first, I realized they want Poe’s story to be told because when things like this happen to people like him, no one ever knows.

This Transgender Day of Remembrance I’m hoping to create visibility for this case to put pressure on the law enforcement that clearly wishes to see it disappear. I’m in the unique position of having documented someone’s last days and can only hope the living images of this beautiful, gentle young man will spur some action.

Please call the Imperial County Sheriff’s office at 442-265-2000 and demand justice for Poe.