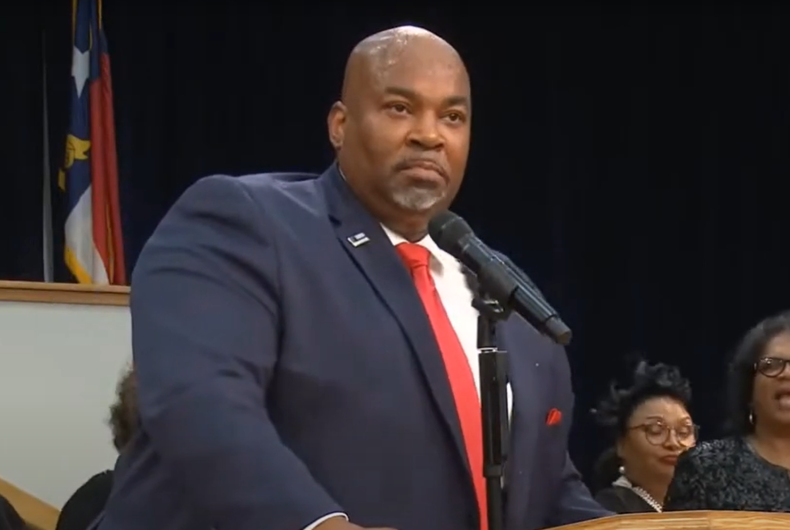 During a sermon at Berean Baptist Church in Winston-Salem, North Carolina, Lieutenant Governor Mark Robinson, and anti-LGBTQ zealot, claimed that straight people are superior to gays due to the ability to procreate.

Robinson told his gullible flock that he does not believe gay people serve any purpose in society, and compared being gay to what the cows leave behind,” maggots, and flies. Maggots, he said, serve a “purpose.”

Related: The right begins to turn on Glenn Youngkin after discovering he has an out staffer

“These people are superior because they can do something these people can’t do,” Robinson said, referencing having a child. “Because that’s the way God created it to be. And I’m tired of this society trying to tell me it’s not so.”

Robinson made several remarks that indicated he knew that media would make his virulent comments public, welcoming the backlash he might receive for doing so.

During the sermon, Robinson dared to come after him, saying that if they want his head to come and get it.

Robinson then proceeded to make more anti-LGBTQ comments—this time toward the transgender community.

In the same sermon published during Trans Awareness Week, Robinson in his bigotry made disparaging comments about trans people’s appearances, and also made the false assertion that there are only two genders, though gender exists on a spectrum.

Robinson’s comments were met with swift backlash from both the religious and political realms.

A protest rally was held Friday before the Trans Day of Remembrance in front of Robinson’s office, with organizers reading the names of transgender people who have been killed this past year in the U.S.—3 of which were in North Carolina.

“This man’s theology and religious practices are not only flawed and a perversion of the Christian tenets,” he said. “He places countless people at risk of violent attacks and even murder every time he opens his mouth.”

Once again, the Lieutenant Governor is putting my community at risk.

Please take care of yourself and your mental health. You can find some LGBT-friendly resources in the image below.#ncpol #yallmeansall🏳️‍🌈 pic.twitter.com/wMXSVmsXwm

“Mark Robinson is a weak and small man who’s full of bluster and bravado,” the group sent. “All of us know men like that, as well as what they’re really about inside.”

“All Robinson has is hatred and stirring up the pot. He has nothing constructive to offer, because he’s just not very smart.”

“FYI,” they continued in another tweet. “Every time @markrobinsonNC has a new temper tantrum about how much he loathes gays, lesbians, teachers or whoever, he harms job growth and new business investment in North Carolina.”

“Literally his only job is to encourage investment in NC. And he’s doing the opposite.”

Mark Robinson is a weak and small man who's full of bluster and bravado. All of us know men like that, as well as what they're really about inside.

All Robinson has is hatred and stirring up the pot. He has nothing constructive to offer, because he's just not very smart. #ncpol

FYI, every time @markrobinsonNC has a new temper tantrum about how much he loathes gays, lesbians, teachers or whoever, he harms job growth and new business investment in North Carolina.

Literally his only job is to encourage investment in NC. And he's doing the opposite. #ncpol https://t.co/hhckzHFnK9

This is far from the first time that the Lt. Governor has found himself embroiled in controversy.

In October, State Democrats called for Robinson’s resignation after he called LGBTQ people “filth” during another church rant.

As reported by Right Wing Watch, in July, Robinson made a rant against transgender rights, saying that suggesting that those who support such efforts and things like Drag Queen Story Hours do so because they desire to molest children.

He has previously proclaimed that being gay is a step before pedophilia, that Michelle Obama is secretly a trans woman, and referred to trans-affirming people as “devil worshipping child molesters.” He also condemned gay people as an “abominable sin” in response to the 2016 Pulse massacre.

Robinson also created an education task force to investigate and pull LGBTQ literature from public schools, as well as report instances of LGBTQ inclusion in schools. Teachers’ names, employers, and information were released unredacted by the report, yet many of the complaints weren’t verified or even authenticated.

When a Democrat state representative questioned him about the report and said it seemed to be “Fox News-driven,” Robinson got so offended that he walked out the room.

Robinson also has a history of anti-Semitic comments & conduct, loathing black people who went to see Marvel’s Black Panther due to it being created by a person whom he described as an “Agnostic Jew” &  a “Satanic Marxist”. He also stated his belief in the conspiracy theory that COVID-19 was created by a cabal of globalists to try and ruin Donald Trump’s re-election.