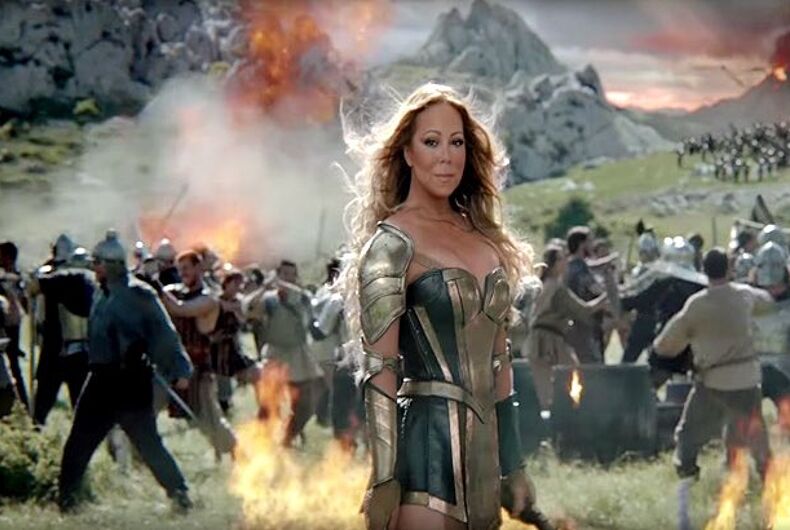 Mariah Carey is the Queen of Christmas and she's not afraid to defend her throne.Photo: Twitter

Mariah Carey, the Queen of Christmas, is going viral on the day after Halloween. Because Christmas really does come earlier every year.

With hundreds of thousands of likes and shares, Carey’s 30-second video is iconic.

Related: Halloween special sponsored by Twix has outraged conservatives howling like a banshee

Carey’s hit “All I Want For Christmas Is You” is the most popular Christmas song of all time and she is not here to play when it comes to defending her crown. She’s here to say, “It’s time.”

Carey takes issue with those complaining that Christmas merchandise follows too closely on the heels of Halloween candy markdowns and before Thanksgiving is finished. And she uses a baseball bat to make her point clear.

Still, even the Guinness World Book of Records felt obligated to point out in reply that Carey should win an award for “new record for the earliest celebration of Christmas.”

Earlier this week, a Twitter user posted a photo of a sign on a Dallas bar’s jukebox that reads, “All I Want For Christmas Is You will be skipped if played before Dec 1. After Dec 1 the song is only allowed one time per night.”

When another user retweeted it, asking, “Is this the war on Christmas I’ve heard about?” Carey stepped up to answer.

She posted a photoshopped image of herself on a battlefield.

How about you let your wife enjoy things she likes before she decides you aren’t one of those things pic.twitter.com/02ySzBMV6t

new record for the earliest celebration of Christmas