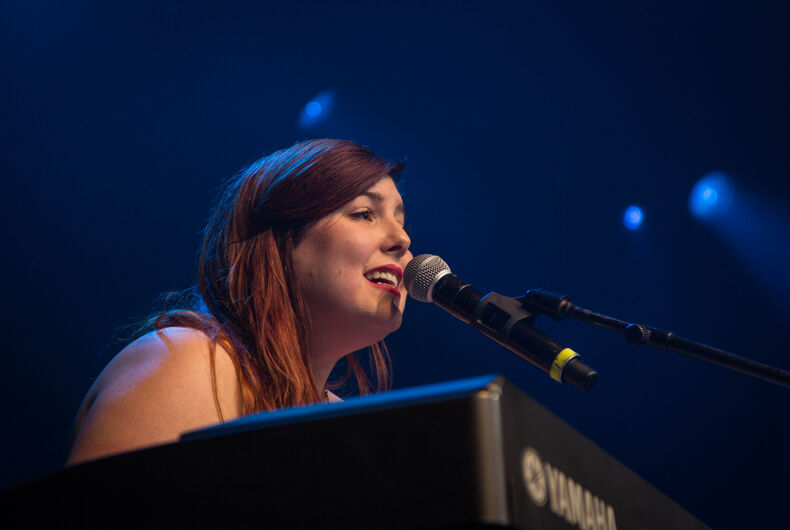 Out musician Mary Lambert announced on social media that she is engaged to her fiance Dr. Wyatt Paige Hermansen.

“I’ve dreamt of this moment my whole life,” Lambert wrote. “We’re gonna get married in front of god and everybody!!!!! I love you, Wyatt Paige Hermansen!!!”

Related: Lesbian comedian Hannah Gadsby secretly got married in January & fans couldn’t be happier for her

Lambert, 32, is a singer and songwriter who is probably best known for her singles “Secrets” and “She Keeps Me Warm.” She worked with Macklemore on the LGBTQ rights hit “Same Love,” which was nominated for Song of the Year at the 2014 Grammy Awards.

In her Instagram post, Lambert included a “ring reveal,” but couldn’t keep a straight face. She also shared a recording of Hermansen proposing at a concert.

“Oh my god! Are you serious?” Lambert shouted with joy.

Hermansen is an English professor and together they and Lambert host a podcast called The Manic Episodes where they discuss living with bipolar disorder.

Raised in the Pentecostal church, Lambert is a Christian and is planning on getting married in a church.

In “Same Love,” she repeats the line “Not crying on Sundays,” a reference to how she has come to accept herself as a gay Christian.

“It was in a positive aspect,” she told the Seattle Times. “It was me saying, ‘I am a gay Christian. I am comfortable.’ I don’t feel like it’s bashing anyone.”

She also sang the line “Love is patient, love is kind” in the song, which is from First Corinthians 13:4.

Woman cured her own HIV without medications or therapy