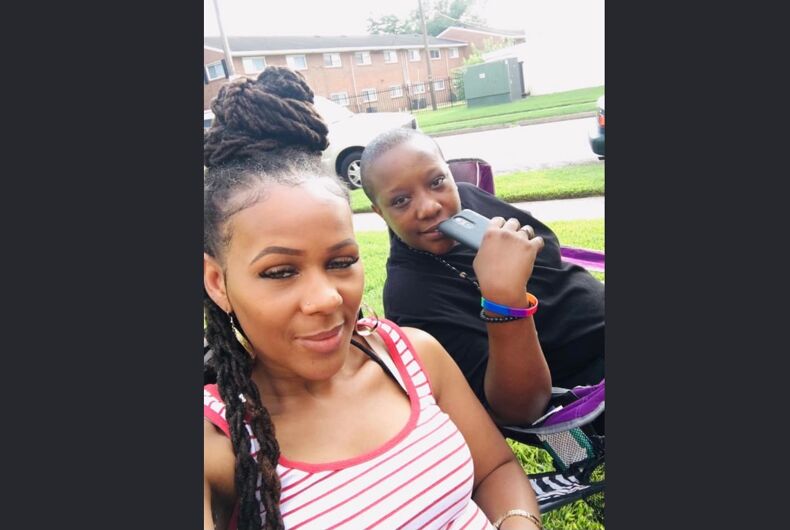 The Young Terrace community in Norfolk, Virginia is in devastation after a mass shooting on November 3 left three women dead, two injured, and several children traumatized from witnessing the murders first-hand — some seeing their own mothers gunned down in broad daylight — right outside their home.

Police report that Detra R. “Dee” Brown, 42, and Nicole Lovewine, 45, who were partners, came home as Lovewine’s pregnant, 19 year-old daughter, got into an argument with her boyfriend. He pulled out a gun and shot her at approximately 6:00 pm. When Brown and Lovewine came out to help, the shooter turned the gun to them and reportedly fired at both “point-blank” in the head.

Another women who was outside with her three children, Sa’idah E. Costine, 44, then ran to try and help them. The assailant shot her as well, leaving her dead. Another women was shot and wounded before the rampage came to an end.

Police have arrested Ziontay Palmer, 19, and charged him with the entire shooting after apprehending him hours after. He was dating Lovewine’s daughter, who is five months pregnant, and authorities believe a domestic dispute set off the violence, according to the Virginian-Pilot.

Lovewine’s sister, Tina McPherson, told the Virginian-Pilot, “That man… put a stain on this family that can never be washed — he hurt us to the core.”

A neighbor and witness told local reporter Andy Fox that there was “nothing they could do” for Brown and Lovewine. “They were shot execution-style. They had just come home from work,” the witness said.

The effect has been more than devastating to the community. Four children are without a mother, an apartment complex’s playground was scarred with blood and bullets, and countless witnesses are traumatized from yet another shooting spree in America.

“I’m a grown man with 30 years of police experience and it shook me to my core,” Norfolk Police Chief Larry Boone said at a press conference following the shooting, “I can only imagine what it did to those kids.”

The Norfolk Redevelopment and Housing Authority (NRHA), which owns the property where the victims lived and the shooting occurred, is providing grief counseling for the entire community.

Brown and Lovewine were beloved, familiar faces at 37th And Zen, a drag bar in Norfolk. “Everyone knows who they are,” bartender Burt McManus told WTKR regarding the victims.

“I can see them rushing to the scene, probably even if it wasn’t [Lovewine’s] daughter, because that’s who they were. Something’s happening, they were going to see what’s up,” McManus added.

The couple were also regulars at the Old Hershee Bar nearby. “I think they should be an example of how you should partner and how you should live your best life,” Annette Stone, owner of both bars, stated. “I think there is a trail of broken hearts.”

Nicole “Pookie” Lovewine (left) and Detra “Dee” Brown (right) were two of the victims killed. Friends say they were never without each other and they “lit up a room.”

Photos of Nicole Lovewine and Detra Brown together.

Lovewine's sister told us they're thankful for everyone who has reached out.

"The community is showing love and respect. That lets you know how good of a person they were."@13NewsNow pic.twitter.com/hXgCkLoqSu

Lovewine was described as a “sweet girl” by another neighbor, who added, “Nicole would come and go to work. When she’d get off work she’d come straight in to the house. She never bothered nobody.”

The neighbor also said, “When you see Nicole, you saw Dee; they were always together, wherever they went. When they left out in the morning to go to work they were together when they came home from work.”

Neighbors tell @13NewsNow the couple tried to help Lovewine's 19yo daughter after the suspect shot her, but the gunman also shot them and two neighbors. pic.twitter.com/eR5AQ9K2hw

Sa’idah, also known as Sara, was remembered by her 25 year-old child Siera at a recent memorial.

She was the mother to six children and a devout worshipper of Islam.

'She lost her life being a hero' | Children and loved ones of Sa'idah Costine visited the growing memorial in the Young Terrace neighborhood this afternoon.

25-year-old Siera Elerson told us what the community support means to her and how she'll remember her mom. @13NewsNow pic.twitter.com/rZgXzXnyFS

Sa'idah Costine was a mother of six children, ranging in age from 6 to 26. Costine was a neighbor and one of three women killed Wednesday night.

Police she was among those who rushed up to help after a suspect fired shots in the Young Terrace neighborhood.@13NewsNow pic.twitter.com/pLpxdXOlqo

Both of the injured victims, including Lovewine’s daughter, are expected to survive. The three slain victims are being commemorated across the community with makeshift memorials, marches, prayer groups, and vigils.

The Norfolk community has held at least three nights of vigils following the shooting.

This memorial in the Young Terrace neighborhood continues to grow with balloons, teddy bears, candles and photos. @13NewsNow #13NewsNow pic.twitter.com/AcPiWbtloE

“We love you”— that’s the message friends and family gave tonight as they lit candles and released balloons @13NewsNow pic.twitter.com/RPq6GYaNnG

“However, this really shakes the foundation of our city when precious lives,” he noted.

Lovewine’s son, Antron Lovewine, has organized a GoFundMe to bury his mother. “My mother was taken from my family by gun violence,” the fundraiser reads. It has raised $490 as of this article’s writing.

A family friend has organized a fundraiser for Detra Brown’s mother, Beverly Holloman, as well. It has raised over $400 as of this article’s writing.

Community members have also started a GoFundMe fundraiser for Costine’s family, which has raised $1,975 as of this article’s writing.

Dionne Warwick questions everything & everyone in “SNL” talk show sketch