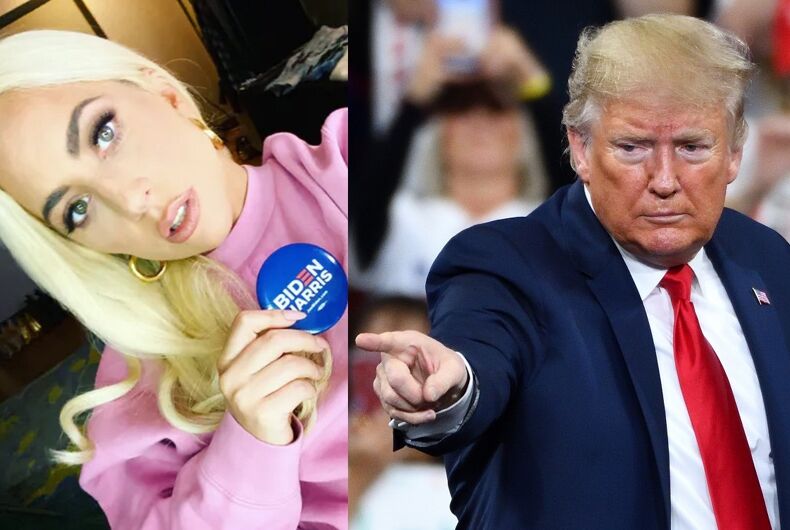 Out pop star Lady Gaga may be associated with high fashion – whether it’s her infamous meat dress or her role as Patrizia Reggiani in Ridley Scott’s new movie, House of Gucci.

But it’s the stunning black gown that she wore to President Joe Biden’s inauguration that’s making news now after the singer revealed it was bulletproof.

Gaga sang the National Anthem before Biden was sworn in as president and told Vogue she was “singing in a Schiaparelli bulletproof dress.”

“That has to be one of the proudest days of my whole life. Like many people in America, I felt a deep fear when Trump was president, and ushering 45 out and 46 in is something I’ll be able to tell my children all about.”

The former president’s supporters rioted at the Capitol after he lost the election in a bid to keep him in power. Trump’s MAGA crowd tore through the building, beating police officers, destroying furniture, and calling for the execution of Vice President Mike Pence.

“I don’t know if people know this about me, but if I weren’t who I am today, I would have been a combat journalist. That was one of my dreams. When I was at the Capitol, the day before the inauguration, I remember walking around and looking for evidence of the insurrection.”

Security around Biden’s inauguration ceremony was paramount following threats from Trump supporters with large sections of the Capitol grounds fenced off and guarded by police.

Gaga supported Biden during the 2020 campaigns, encouraging her fans to vote for the former vice president. Her support for Biden even got Donald Trump’s attention. She got under his skin.

Trump also launched a volley of tweets attacking the performer and Biden. Shortly before the election, while Trump raged about her support for Biden, she tweeted back to his attacks, “HEY @realDonaldTrump SO HAPPY IM GLAD TO BE LIVING RENT FREE in your HEAD.”

“To all the women and all the men with daughters, and sisters, and mothers, everybody no matter how you identify,” she told voters at a rally for Biden. “Now is your chance to vote against Donald Trump, a man who believes his fame gives him the right to grab one of your daughters, or sisters, or mothers, or wives by any part of their bodies.”

She was referring to the infamous Access Hollywood tape, where Trump admitted to sexually assaulting women during an interview with NBC’s Billy Bush: “I don’t even wait. And when you’re a star, they let you do it. You can do anything. … Grab ‘em by the pussy. You can do anything.”

During his last hours in office, Trump was reportedly seething she was performing, seeing it as a slight to his own presidency after A-list celebrities shunned him at his inauguration. He did not attend Biden’s inauguration, choosing instead to fly out of D.C. before the ceremony and Lady Gaga’s performance.

GOP senator calls lesbian educator “a joke” because she doesn’t have kids. Her response was awesome.