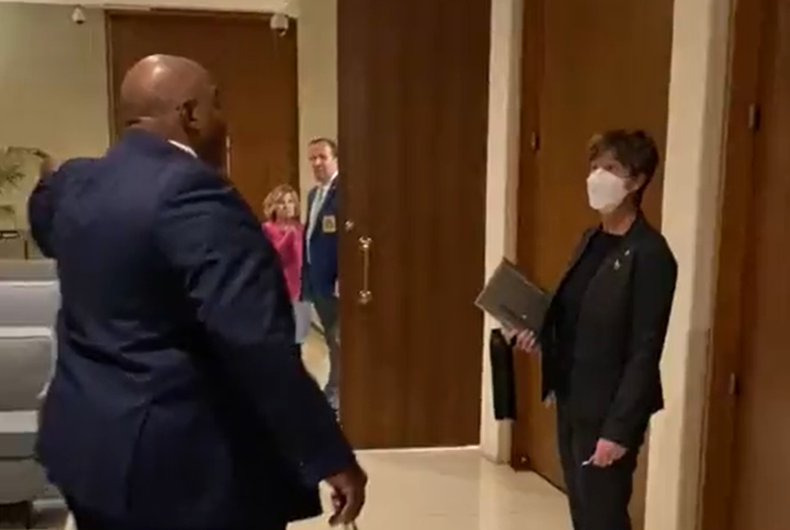 Zealously anti-LGBTQ North Carolina Lt. Gov. Mark Robinson (R) allegedly wagged his finger in the face of a state lawmaker who made a speech about supporting LGBTQ people, yelling at her for “equating Black people with gay people.”

“It was a rant. He berated her, and he yelled as loudly as he could,” said state Sen. Natasha Marcus (D), who witnessed the confrontation.

State Sen. Julie Mayfield (D) gave a speech in the North Carolina Senate Monday night condemning anti-LGBTQ rhetoric and expressing the need for politicians to represent everyone, The News & Observer reported. She did not mention Robinson explicitly.

“We have a responsibility to serve all of our constituents, not just those who look like us, or think like us, or who worship in the same church as us,” Mayfield said. “We are here to serve everyone… even if they love differently from us.”

“It is convenient fiction that we can say something in a particular forum and not expect to be held accountable for those words in another,” she said. That may have been a reference to Robinson, who has made most of his anti-LGBTQ comments in churches. “We are elected officials. And if we can’t respect our constituents rather than viciously attack some of them, then maybe we’re in the wrong job.”

In the speech, Mayfield said that she attended a ceremony to honor three victims of lynching in the state, and she said that it reminded her that elected officials “have a responsibility to serve all of our constituents, not just those who look like us, or think like us, or who worship in the same church as us. We are here to serve everyone… even if they love differently from us.”

She ended her speech saying, “I stand in solidarity with LGBTQ North Carolinians.”

Robinson – who has called LGBTQ people “filth,” compared gay people to cow dung, and repeatedly disparaged the trans community – approached Mayfield in the hallway after the speech.

Both Mayfield and Marcus, who was present for the confrontation, said Robinson started yelling at Mayfield and wagging his finger in her face.

“Sen. Mayfield’s remarks speak what’s in the hearts of most North Carolinians, and the fact that it set the lieutenant governor off that much is shocking to me,” Marcus said.

During the confrontation, Robinson reportedly told her he didn’t like her “equating Black people with gay people” since she opened her speech by talking about the ceremony for the victims of lynching.

Marcus only recorded the tail end of the conversation, which she posted to social media. In the video, Robinson says, “Next time, before you get ready to say something on that floor, come see me,” before turning around and storming off.

For the record, Sen Mayfield’s floor remarks were full of compassion for all people. She believes, as I do, that elected reps should not speak in hateful terms about our constituents. The struggle for civil rights is ongoing. Here is what she said that enraged the bully Lt Gov: pic.twitter.com/IGeXWBcTbS

“If you weren’t there to hear what I said to her, you’ll just have to take her word for it because anything I tell you you’re probably going to twist for your own purposes,” Robinson told The News & Observer when asked for comment.

Robinson, who has voiced plans to run for governor in 2024, has repeatedly made horrific public comments about LGBTQ people.

Just last week, during a sermon at Berean Baptist Church in Winston-Salem, he claimed that straight people are superior to gays due to the ability to procreate.

Robinson told his flock that he does not believe gay people serve any purpose in society, and compared being gay to “what the cows leave behind.”

In the same sermon, Robinson made disparaging comments about trans people’s appearances, and also made the false assertion that there are only two genders.

In October, State Democrats called for Robinson’s resignation after he called LGBTQ people “filth” during another church rant.

As reported by Right Wing Watch, in July, Robinson made a rant against transgender rights, saying that suggesting that those who support such efforts and things like Drag Queen Story Hours do so because they desire to molest children.

He has previously proclaimed that being gay is a step before pedophilia, that Michelle Obama is secretly a trans woman, and referred to trans-affirming people as “devil worshipping child molesters.” He also condemned gay people as an “abominable sin” in response to the 2016 Pulse massacre.

Robinson also created an education task force to investigate and pull LGBTQ literature from public schools, as well as report instances of LGBTQ inclusion in schools. Teachers’ names, employers, and information were released unredacted by the report, yet many of the complaints weren’t verified or even authenticated.

When a Democrat state representative questioned him about the report and said it seemed to be “Fox News-driven,” Robinson got so offended that he walked out the room.