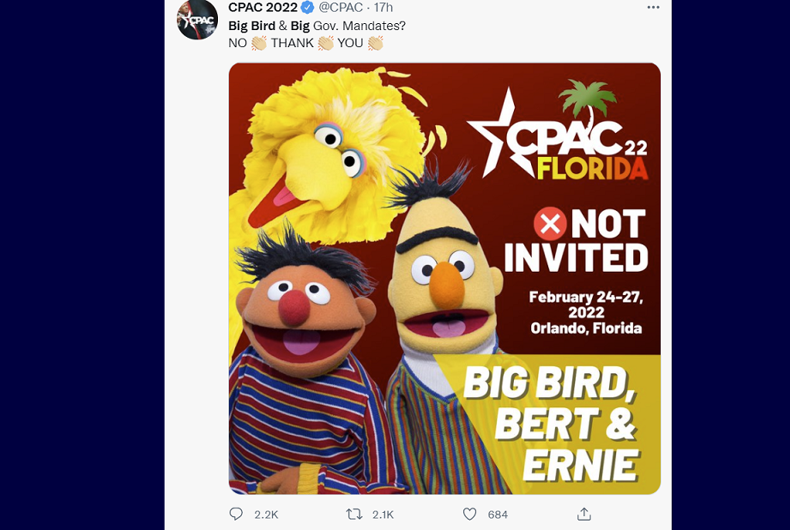 The Conservative Political Action Conference (CPAC) has long been one of the biggest events of the year for conservative activists in the U.S., drawing big name conservative journalists, top Republican elected officials, and leaders of powerful rightwing organizations.

But three, er, people are pointedly not invited to CPAC 2022: Big Bird, Bert, and Ernie.

Related: Meet the gay man behind many of your favorite Muppets characters

Earlier today, the official Twitter account for CPAC 2022 tweeted a graphic that showed the three residents of Sesame Street with a big red “X” next to their images and the words “NOT INVITED.”

Big Bird faced criticism from the right earlier this month after tweeting: “I got the COVID-19 vaccine today! My wing is feeling a little sore, but it’ll give my body an extra protective boost that keeps me and others healthy.”

CPAC appears to be referring to this exchange when it tweeted “Big Gov. Mandates,” even though Big Bird did not say anything about a vaccine mandate.

It’s less clear what exactly Bert and Ernie did to get uninvited from CPAC, outside of the years of speculation about the nature of their relationship.

The conservative anger at three fictional characters is being brutally mocked on the social media platform.

Look, if you’re going to @CPAC, Bert, Ernie, Big Bird and @sesamestreet are too smart for you anyway #FuckCPAC #WhinyLittleFascists pic.twitter.com/NvVjWRBIGK

Is this cancel culture? pic.twitter.com/okKJT6viTa

Whenever someone cries about how Democrats' political messaging is ruined by a "defund the police" sign show them this. The Republican Party has been trying to kill Big Bird by firing squad for at least a decade and no one cares https://t.co/8ehC5xXpMe

The people who say Paul Gosar was only sending a silly cartoon around, just banned Big Bird, Bert, and Ernie from CPAC.

But these aren’t the only Sesame Street characters CPAC’s directors are mad at this week.

“What race is Ernie is Bert? [sic]” Schlapp asked. “You are insane PBS and we should stop funding you.”

What race is Ernie is Bert? You are insane PBS and we should stop funding you. https://t.co/iHyGYJvG5l