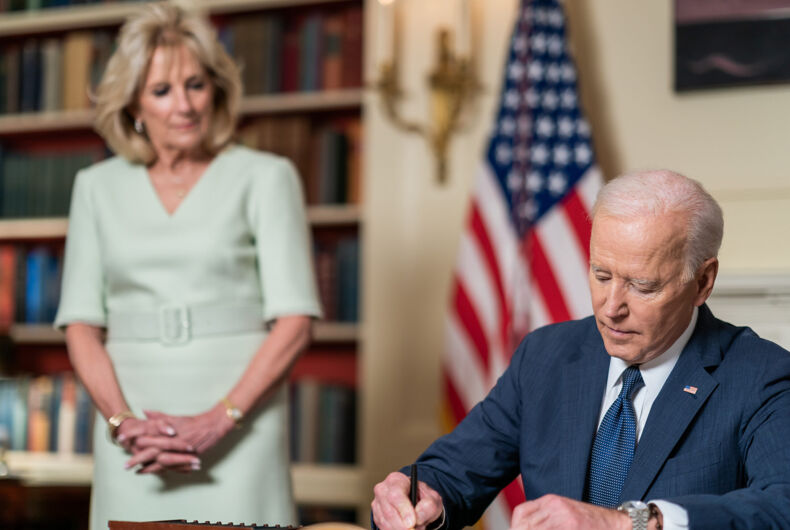 The White House proclaimed December 1 to be World AIDS Day, pledging to “rededicate ourselves to building on the progress of the last four decades.”

Biden pledged to continue the ongoing fight against HIV and listed several ways that the federal government plans to increase funding, support global partners, and provide vital healthcare to underserved countries around the world.

Inequality lies at the root of finally conquering the “serious public health crisis,” the administration says. Over the next year, they said, they will focus on bridging that gap and promised that “the voices of people with HIV are at the center of our work to end the HIV epidemic globally.”

“Ending the HIV epidemic is within our reach, and we are committed to finishing this work,” the proclamation reads.

The Trump administration made it a point to deliberately ignore LGBTQ people from World AIDS Day statements, even though the virus has a disproportionate impact on gay and bi men.

Instead, he made wild promises about his ability to end the HIV epidemic. They also claimed he was the first president to honor World AIDS Day with a red ribbon. Trump even once said that scientists had created “an AIDS vaccine.”

For decades, World AIDS Day has been recognized as an opportunity for people around the world to stand together in the fight against HIV. This year on World AIDS Day, we are focused on addressing health inequities and inequalities and ensuring that the voices of people with HIV are at the center of our work to end the HIV epidemic globally.

While we have made remarkable progress in the 40 years since the first-known reported case of AIDS, this disease remains a serious public health challenge — and we join the international community to honor and remember the more than 36 million people, including 700,000 Americans, who have tragically died from AIDS-related illness since the start of the epidemic. We also renew our commitment to stand with the nearly 38 million people living with HIV around the world as we pursue our shared goal of ending the HIV epidemic.

The COVID-19 pandemic has added to the challenges our heroic health care and frontline workers face, yet they continue to deliver essential HIV prevention services and provide vital care and treatment to people living with HIV. The pandemic has also interrupted HIV research and highlighted the work that still remains to achieve equitable access to HIV prevention, care, and treatment in every community — particularly for communities of color, adolescent girls and young women, and the LGBTQI+ community.

My Administration remains steadfast in our efforts to end the HIV epidemic, confront systems and policies that perpetuate entrenched health inequities, and build a healthier world for all people. Earlier this year, I reinstated the White House Office of National AIDS Policy to coordinate our efforts to reduce the number of HIV infections across our Nation. This week, my Administration is releasing an updated National HIV/AIDS Strategy to decrease health inequities in new diagnoses and improve access to comprehensive, evidence-based HIV-prevention tools. This updated strategy will make equity a cornerstone of our response and bring a whole-of-government approach to fighting HIV.

My budget request includes $670 million to support the Department of Health and Human Services’ Ending the HIV Epidemic in the U.S. Initiative — to reduce HIV diagnoses and AIDS-related deaths. My Administration has also strengthened the Presidential Advisory Council on HIV/AIDS by adding members from diverse backgrounds who bring the knowledge and expertise needed to further our Nation’s HIV response.

My Administration is committed to helping the world end the AIDS epidemic as a public health threat by 2030. Through the United States President’s Emergency Plan for AIDS Relief (PEPFAR), we have saved more than 21 million lives, prevented millions of HIV infections, and supported at least 20 countries around the world to reach epidemic control of HIV or achieve their ambitious HIV treatment targets. This remarkable progress over the past 18 years has been made possible through strong, bipartisan United States leadership and American generosity. Now, together with partner governments and communities, my Administration is setting a bold vision for achieving sustained epidemic control of HIV by supporting equitable health services and solutions, contributing to improved health for all in PEPFAR-supported countries, and working with the Global Fund to Fight AIDS, Tuberculosis and Malaria; UNAIDS; and other regional and local partners toward the goal of ending the HIV epidemic everywhere.

Ending the HIV epidemic is within our reach, and we are committed to finishing this work. On World AIDS Day, we rededicate ourselves to building on the progress of the last 4 decades; upholding and advancing human rights; supporting research, science, and data-driven solutions; expanding access to housing, education, and economic empowerment; and fighting stigma and discrimination. No one living with HIV should suffer the undeserved guilt and prejudice that too many continue to experience. We must innovate and explore new ways to help address HIV/AIDS in communities here at home and around the world.

NOW, THEREFORE, I, JOSEPH R. BIDEN JR., President of the United States of America, by virtue of the authority vested in me by the Constitution and the laws of the United States, do hereby proclaim December 1, 2021, as World AIDS Day. I urge the Governors of the United States and its Territories, and the American people to join the HIV community in activities to remember those who have lost their lives to AIDS and to provide support, dignity, and compassion to those living with HIV.

IN WITNESS WHEREOF, I have hereunto set my hand this thirtieth day of November, in the year of our Lord two thousand twenty-one, and of the Independence of the United States of America the two hundred and forty-sixth.