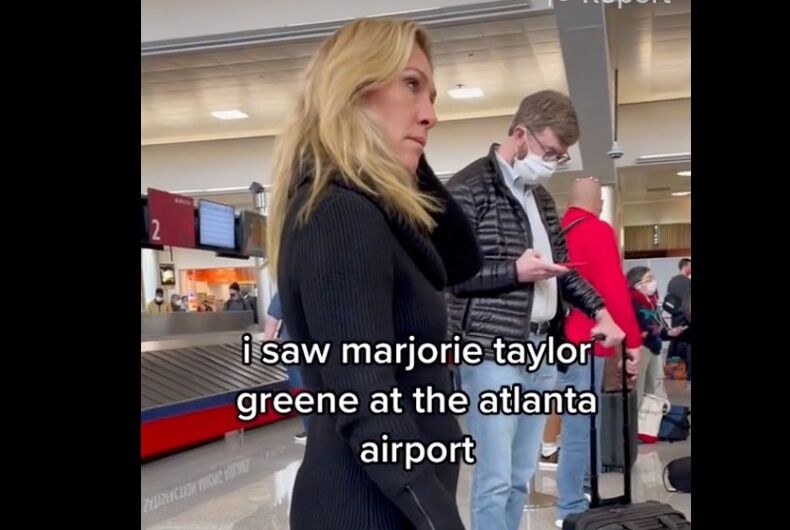 A TikTok user found themselves standing next to Rep. Marjorie Taylor Greene (R-GA) at the luggage carousel at the Atlanta airport and couldn’t resist trolling the far-right congresswoman. The video has been viewed over a million times.

Greene was maskless despite federal regulations requiring passengers to help slow the spread of the coronavirus and the user made sure to subtly point that out as Greene tries desperately not to look at her.

Greene, a COVID-19 conspiracy theorist known for trolling school shooting survivors and LGBTQ people, has quickly become one of the most reviled legislators during her brief time in office. She has been stripped of all of her committee assignments and condemned by both parties for her offensive comments like comparing wearing masks to the Holocaust.

The user filmed Greene standing alone at the carousel and talks to her off-camera friend while Greene stands still staring at the whirling luggage.

“I just love voting in Georgia for Democrats,” the user tells her friend. “That way we don’t have to get the nasty COVID spread to us.”

Greene has wasted over a quarter of her salary to pay fines for her quixotic attempts to avoid wearing a mask at work. It’s a publicity stunt, one that’s possible because she’s a millionaire. She is the only person in the video who is not wearing a mask.

“I’m bad at confrontation,” Eva Baker wrote with the video.

She also claimed to be a socialist in an attempt to spark Greene into doing something eccentric in public. For once, the congresswoman did not take the bait.

When some users chastised her for “disrespecting” the member of Congress, Baker responded.

“You say that I shouldn’t disrespect this woman because I don’t agree with her views, but isn’t that exactly what she did when she harassed and followed a teenager who survived the Parkland school shooting and called him a coward?” she asked. “Not to mention this is the same woman who has racked up over $60,000 in fines for refusing to wear a mask in Congress even though she’s unvaccinated.”

Greene repeatedly claimed that the Sandy Hook Elementary School and Parkland High School shootings were fake and harassed one victim-turned-gun control advocate as he walked down the street.

In Congress, Greene was given a preliminary warning and then fined $500 for her first violation and $2,500 for each subsequent violation. So far, she’s been observed not wearing a mask or directly refusing to wear one at least 22 times so far according to the House Sergeant at Arms.

Last week, a defiant Greene said she would “continue my stand on the House floor against authoritarian Democrat mandates, because I don’t want the American people to stand alone.”

Last month, planners of the rally that got protestors fired up for the January 6 insurrection at the U.S. Capitol named Greene as a co-conspirator who helped to plan their protest.

Trump supporter slaps phone out of woman’s hand at airport. It didn’t end well for her.