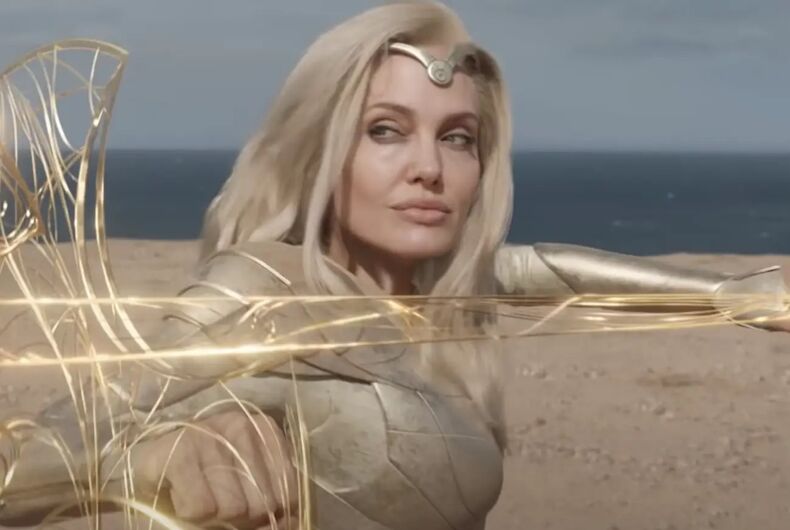 Eternals, the newest movie in the Marvel Cinematic Universe, will not be shown in Saudi Arabia, Qatar, or Kuwait because it includes a gay kiss. Homosexuality is illegal in all three countries.

Angelina Jolie, one of the flick’s stars, didn’t hold back when she shared her thoughts on the Middle Eastern countries’ decision.

The film also stars Brian Tyree Henry as Phastos, the first gay superhero featured in the franchise. He shares an on-screen kiss with his partner.

“I’m sad for [those audiences]. And I’m proud of Marvel for refusing to cut those scenes out,” Jolie said. “I still don’t understand how we live in a world today where there’s still [people who] would not see the family Phastos has and the beauty of that relationship and that love.”

“How anybody is angry about it, threatened by it, doesn’t approve or appreciate it, is ignorant.”

Disney reportedly refused to cut the scene when asked to censor it by the government of the three countries.

“I don’t know all the details, but I do believe discussions were had and there’s a big desire from Marvel and myself — we talked about this — to not change the cut of the movie,” Academy Award-winning director Chloe Zhao said at the time. “Fingers crossed.”

Kit Harrington, who plays human museum worker Dane Whitman in the film, said he is excited to be part of such an inclusive film.

In the upcoming film Thor: Love and Thunder — the fourth film installment of the Norse-inspired series — out actress Tessa Thompson will reprise her role as Valkyrie, a former slave-trader now seeking a queen to rule at her side in New Asgard.

Eternals is in theaters now.