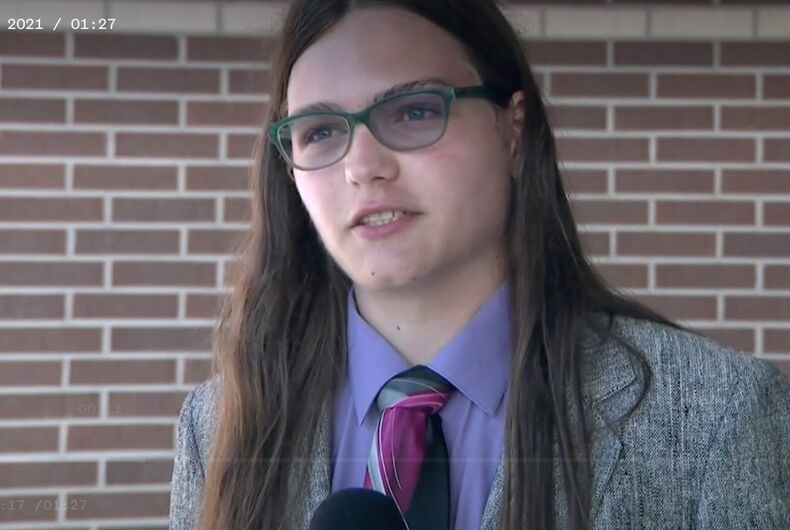 Male and non-binary students are suing their Texas high school after they were suspended for having hair that’s too long, even though girls are allowed to have long hair at the school.

The lawsuit says that the students – including a Latino 11-year-old boy who wears a ponytail to represent his culture – are being denied educational opportunities because of their gender, in violation of federal law.

The ACLU of Texas has filed a federal lawsuit against the Houston-area Magnolia Independent School District for enforcing a discriminatory dress code policy that punishes boys for wearing their hair too long.

The lawsuit was filed on behalf of seven students ages 7 to 17 and accuses the school of violating Title IX, which prohibits discrimination in education on the basis of sex.

Six of the students involved identify as boys and one identifies as non-binary, though the school reportedly refuses to recognize the non-binary student’s gender and is making them follow the male dress code.

The students have been subject to long in-school suspensions, as well as other punishments, for failing to adhere to strict dress code standards that say boys’ hair cannot fall past the bottom of the ear. The dress code also states that while hair must be kept out of the eyes, boys cannot wear a ponytail or bun.

“Plaintiffs have been subject to severe, ongoing, and escalating harms due to the district-wide policy that prohibits boys, but not girls, from wearing long hair,” the lawsuit states. “They have been denied classroom instruction, barred from extracurricular activities, and forced to be suspended and separated from their peers for well over a month simply because these students do not conform to Magnolia ISD’s stereotypical notions of gender.”

The lawsuit says that some students have even been sent to a “disciplinary alternative education program,” due to their refusal to cut their hair.

One nine-year-old boy, who is Latino and wears his hair in a long ponytail as part of his family’s culture, is now being homeschooled after being sent to one of these alternative programs. The lawsuit explains that this boy’s sister wears her hair long in the same school district without any problems.

The lawsuit also speaks about the 11-year-old non-binary student, referred to as T.M., and how they have “worn long hair for the last couple years as a critical component of expressing their gender identity.”

“If T.M. is forced to wear short hair based on gender stereotypes associated with their gender assigned at birth,” the lawsuit continued, “T.M. will lose a vital part of who they are and sacrifice an essential element of their gender expression.”

T.M.’s mother, Danielle Miller, spoke with the Texas Tribune about the trauma their child endured by even the thought of having to cut their hair. T.M. was “just in absolute devastation and tears,” Miller said.

“Based on [their] reaction and how harsh and traumatized they were, I realized that we weren’t going to be cutting [their] hair.”

The school district has been cracking down on the dress code policy this year, as most of these students say they have worn long hair for years without any problems.

“At a time when students have already been through so much due to the COVID-19 pandemic, it is outrageous that Magnolia ISD administrators are pushing students out of school because of their gender and hair,” Brian Klosterboer, ACLU of Texas staff attorney, said in a statement.

In August, after parents and students complained about the dress code at a school board meeting, the school issued a statement defending its policy.

“Magnolia ISD has used a dress code that sets different standards for boys and girls for many years,” it said. “For example, hair length for boys must be no longer than the bottom of the collar. This has been approved by the Texas courts and continues to be used by roughly half the districts in the state of Texas.”

“The differentiated dress and grooming standards do not violate Title IX and are included in the student handbook each year. Magnolia ISD’s approach to the dress code reflects the values of our community at large.”

After the lawsuit was filed, the school issued another statement to NBC News claiming to “respect varying viewpoints” as well as “the rights of citizens to advocate for change.”