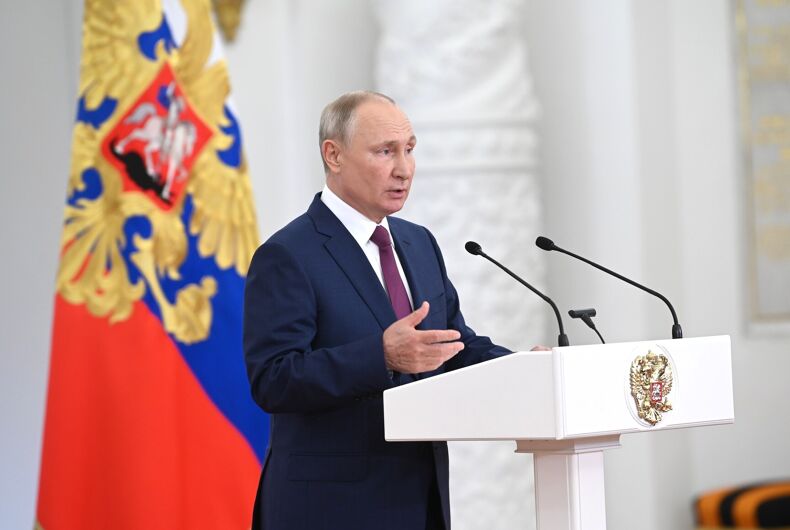 President Vladimir Putin gives a speech to the members of the Russian Olympic team for the 2020 Summer Olympics in Tokyo on June 30, 2021Photo: Kremlin.ru

State media in Russia reports that the Russian government is considering a ban on anything associated with the LGBTQ movement along with other “extremist” ideological groups rising in the country. The Moscow Times reports that the potential ban would include “radical feminist and child-free groups” as well.

The suggestion comes as the country continues to crackdown on pro-equality organizers. This week, three organizations and 22 people were labelled “foreign agents” by the Russian Ministry of Justice, including the Ivanovo Oblast-based Center for Gender Studies, a founding member of Pussy Riot, and a publication created by the punk performance group, Mediazona.

Related: Russian printer refuses to make BTS posters because they could be deemed illegal “gay propaganda”

“LGBT ideology, radical feminism and child-free movements should be recognized as extremism — an extremist ideology,” Andrei Tsyganov, a chairman of a commission under the Roskomnadzor, the agency charged with regulating content aired in Russian markets, said.

Tsyganov believes this should be done in the name of protecting youth in Russia from such “extreme” content online or on social media.

The “extremist” designation in Russia has been used by the country to ban any organizations or content associated with the Jehovah’s Witnesses, the National Democracy Institute, the National Endowment of Democracy, and, most recently, groups associated with Russian opposition leader Alexei Navalny, who is currently imprisoned and viewed as Amnesty International as a prisoner of conscience.

The “foreign agent” designation is made after organizations make required disclosures about their finances, and any group with any “ties” to foreign funding is then labelled as such and must disclose the designation prominently in their media, in addition to facing stricter rules and potential fines, according to Russian media outlet RT.

Coincidentally, many of the groups and individuals with such designation tend to be in opposition to the ruling government. The most recently designated “foreign agents” were deemed so without notification or explanation, and one media organization had recently taken part in publicly protesting the law allowing for “foreign agents” designation.

Russia has placed more and more restrictions on LGBTQ people and content, with nearly anything pro-LGBTQ being deemed as dangerous “propaganda” under Russian President Vladimir Putin. While same-sex relationships themselves are not punishable by law in Russia, other anti-LGBTQ laws are in place, such as a 2013 law that makes dissemination of “propaganda on non-traditional sexual relations” a criminal offense.

Most Pride celebrations are not allowed under this law, and people can be prosecuted for publicly supporting or displaying pro-LGBTQ content or behavior.

This spring, a Pixar short film, Out, was deemed such “propaganda” by Roskomnadzor. A prosecutor called for Dolce & Gabbana to be banned in the country because the fashion outlet, founded by two gay men, created an ad featuring same-sex couples kissing.

Last year, under the law, a 27 year-old LGBTQ activist was fined for drawing families with same-sex couples. In July 2020, Putin mocked the U.S. Embassy for raising a Pride flag during Pride Month, claiming that doing so “revealed something about the people that work there.”

A national referendum passed by citizens in the country in early 2020 made marriage legally defined as only being between a man and a woman. Putin’s United Russia party has proposed bans on bisexual behavior and polyamorous relationships this year, the Moscow Times added.

Is Minneapolis ready for its first queer mayor? Because she’s ready for big change.