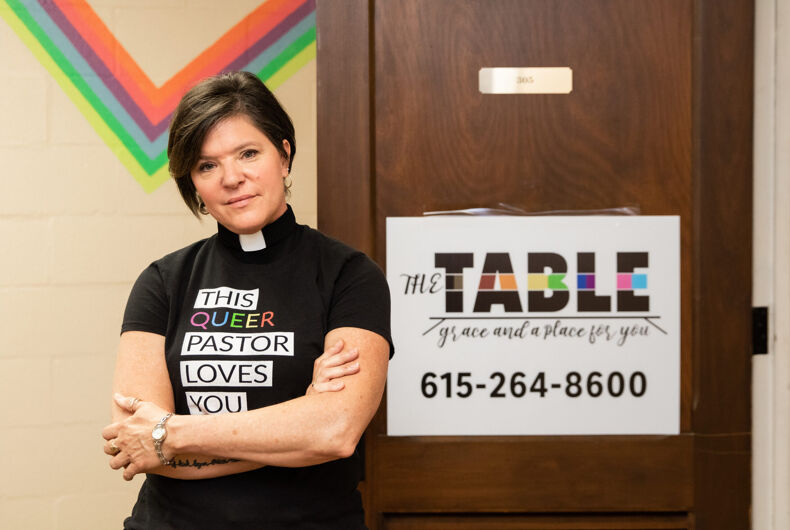 Rev. Dawn Bennett is often told that she doesn’t really seem like a pastor. She is also told that her place of worship—which she calls a faith collective—doesn’t feel all that churchy either.

But for the outspoken, bisexual, rainbow-loving faith leader, that is exactly the point.

As leader of Nashville-based LGBTQ congregation, The Table, her goal is to bring people together in a new way and help members heal from the religious trauma most of them have experienced elsewhere. Her unwavering dedication to creating a safe religious space for the LGBTQ community makes her one of our 2021 Hometown Heroes.

“Everybody that I serve carries religious trauma,” she told LGBTQ Nation. “Living in the deep South, particularly, as a queer person religious trauma is very high here…. Here, religion is cultural…. So we work really hard to destigmatize what it means to be an LGBTQ person of faith.”

Accomplishing this, of course, is not easy.

“When you’ve been told terrible things about how much God hates you and how disgusting you are and how you’re not allowed to believe in God because you’re gay, it’s very traumatic language. So it takes time, and it takes a gentle approach, and it takes patience and dedication to walk with people and journey with people in an effort to untangle some of that mess.”

At The Table, queer people are not only embraced; they are also able to pray with an LGBTQ-first mindset.

“Most church-oriented spaces are heteronormative,” Bennett said, “and when they say they are welcoming and affirming, it’s basically built on a straight framework, and LGBTQ folks are invited into the community.”

The Table, on the other hand, is built on an LGBTQ framework and is 100% LGBTQ led. “We work very diligently at making sure that everything we do is done from a rainbow lens.”

Bennett—who is also Nashville’s first queer woman Lutheran pastor—launched The Table in January 2020. Only a few months later, the world went into lockdown, and The Table team quickly pivoted to a virtual format.

Doing so was a challenge, but it turned out to be a blessing in disguise. Going virtual allowed Bennett to connect with LGBTQ people all over the country. She didn’t realize just how many people were in need of pastoral care.

Becoming a nationwide organization may not have been in the plans, but Bennett went with it. While The Table is now welcoming people in person, she continues to broadcast her sermons online in hopes of connecting with any LGBTQ people who need a religious home.

For Bennett, the work she does is personal, too. Not only is she bisexual, but she has two gay brothers, a lesbian sister, and a transgender son. “I have a lot of skin in the game,” she said.

Raised deeply Catholic, she has seen firsthand the damage religion can do to LGBTQ people. For many years, she resisted the urge to get ordained, but she finally gave in to the mission she felt compelled to fulfill: Spreading God’s message of love.

“The only thing God has ever said about humanity is how beautiful we are and how loved and beloved we are… All the other bullshit is what humans have said in God’s name, and those are lies.”

But Bennett is not only focused on tearing down anti-LGBTQ religious ideology. She also fights for LGBTQ rights politically. 2021 has been a record year for anti-LGBTQ legislation coming out of state legislatures, and Tennessee has passed some of the country’s most restrictive anti-LGBTQ laws, many of which target transgender people. Bennett isn’t staying quiet.

“I’ve had Governor Lee on blast. I’ve written open letters. I’ve put him on blast on social media, and I will continue to do so because the way he is governing this state is dangerous to the lives of LGBTQ people, particularly youth and their families.”

Bennett was nominated for LGBTQ Nation’s Hometown Hero award by a member of The Table named Jessica, a trans woman who wrote that she “would not have had the strength to transition this far this fast” without her. Bennett has provided a lot of support to Jessica, including accompanying her to court when she was changing her name.

Bennett said she is honored by Jessica’s nomination, but even more honored that people like Jessica allow her to play a role in their lives.

“I’m just really trying to help people celebrate who they are and who God created them to be,” Bennett said.  “If I can help Jessica celebrate who she is, then that is an honor. Because that means she invites me into her life and she doesn’t have to do that.”