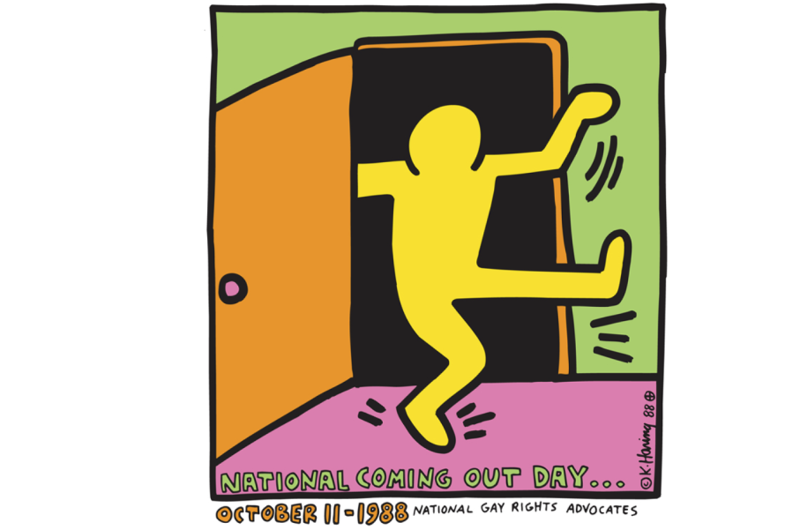 While National Coming Out Day (NCOD) celebrates LGBTQ culture and the power of living authentically, both were much harder to come by when the day was first celebrated 33 years ago.

Before the holiday was first observed in 1988, its creators — Dr. Robert H. Eichberg, a then-43-year-old psychologist, and Jean O’Leary, the then-40-year-old lesbian activist founder — wanted a positive community celebration to counter all the negativity and hatred directed at gays and lesbians.

Related: This ABC News journalist’s Coming Out Day letter gives advice to his younger, closeted self

They chose October 11, 1988 as the celebration’s inaugural date because it marked the one-year anniversary of the 1987 National March on Washington for Lesbian and Gay Rights.

The march drew a crowd estimated from 500,000 to 750,000 marchers (including a contingent of bisexuals) in opposition to President Ronald Reagan’s neglect of the HIV epidemic and the Supreme Court’s 1986 ruling against consensual gay sex in the Bowers v. Hardwick case.

Though the march was the second gay and lesbian march on the Capitol, after the first on October 14, 1979, it was perhaps the largest queer protest of the decade.

The six-day event included demonstrations outside of the IRS and Supreme Court buildings, a mass marriage, the first public display of the AIDS Memorial Quilt, and speeches by actress Whoopi Goldberg and then-Democratic presidential candidate Jesse Jackson.

The marchers demanded an end to all oppression based on sexual orientation, gender, and race. They also demanded the repeal of sodomy laws, legal recognition of same-sex relationships, the passage of a national gay and lesbian civil rights bill as well as a right to reproductive freedoms, like access to contraception and abortion.

After the event ended, inspired attendees went home to found organizations in their home states that fought for gay and lesbian rights as well as support for those living with HIV.

Eichberg and O’Leary were inspired to maintain the sense of community and shared purpose from the march as well. In the face of so much anti-gay hostility, they envisioned a day that would unite queer people and affirm the power of their visibility.

“Most people think they don’t know anyone gay or lesbian, and in fact everybody does,” Eichberg said in a 1993 interview. “It is imperative that we come out and let people know who we are and disabuse them of their fears and stereotypes.”

The inaugural celebration was observed in 18 states. In 1989, 21 states observed it. By 1990, 50 states and seven other countries observed it, thanks in part to an awareness-raising media push.

That same year, the Human Rights Campaign (HRC) joined efforts to promote the celebration. From 1999 to 2014, the HRC assigned annual themes for the day, such as “Come Out to Congress,” “It’s a Family Affair,” “Conversations from the Heart,” “Coming Out Still Matters,” and “Come Out. Vote.”

But NCOD was neither Eichberg nor O’Leary’s first political endeavors.

In 1975, Eichberg founded a political action committee in Los Angeles for gay and lesbian civil rights. He also published the 1990 book Coming Out: An Act of Love.

In 1971, O’Leary, a former nun, successfully advocated for the National Organization for Women to accept lesbians. In 1972, she founded Lesbian Feminist Liberation, one of the earliest lesbian rights organizations. Two years later, she joined the National Gay Task Force. In 1977, she organized the first meeting of gay and lesbian leaders at the White House. Her writing also appeared in the 1985 anthology Lesbian Nuns: Breaking Silence.

Though she held anti-transgender views early into her work, she later regretted those views as “embarrassing,” “horrible,” and exclusionary.

The significance of NCOD has changed a lot since its creation. HIV medication and treatment have become more accessible, same-sex marriage has been legalized nationwide, LGBTQ characters and celebrities appear regularly in TV and film, and the Supreme Court ruled against LGBTQ workplace discrimination last year.

For some, NCOD remains a day to celebrate their authentic selves. But for others, it’s a reminder of the oppression that keeps some queers closeted.

In 2013, Black queer writer Preston Mitchum noted that it’s not always safe for people to come out because doing so may cause them to be targeted for increased discrimination or violence. Others have noted that some queers were never closeted to begin with and have always lived as their out, authentic selves.

No matter one’s feelings on it, NCOD remains a reminder about the power of visibility.

As for the day’s creators, Eichberg died on August 11, 1995, due to complications with HIV. He was 50. He was survived by his mother as well as his partner Jon Landstrom.

O’Leary died on June 4, 2005, due to lung cancer. She was 57. She was survived by her two brothers, sister, her partner Lisa Phelps, their daughter Victoria and their son David de Maria.