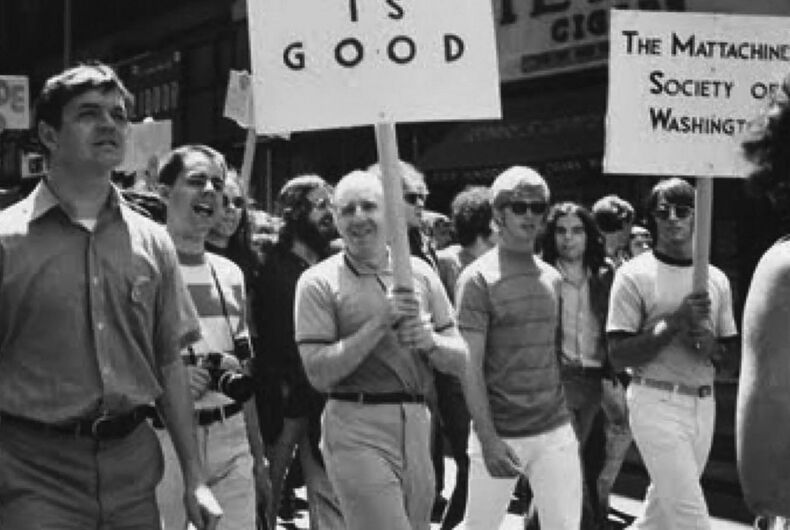 PBS premieres for a national audience the documentary film Cured on Monday, October 11.

This film by Patrick Sammon and Bennett Singer profiles the development, expansion, and eventual victory of activists both outside and inside the ranks of the American Psychiatric Association (APA) to remove homosexuality from its manual of mental illnesses, its Diagnostic and Statistical Manual, and the often-contentious debate surrounding the change.

Related: Drag queens stormed a psychiatric convention to demand they stop saying gays are sick. I was there.

The film begins from a context in which conservative religious denominations defined homosexuals as sinful, government prosecuted homosexuals as criminal, and the psychiatric profession judged them as sick.

Interviewing key eyewitnesses, including Charles Silverstein, Rev. Magora Kennedy, Kay Lahusen, and Frank Kameny, combined with rare archival footage, this important film unearthed the history of how a relatively small group of committed and fervent activists stood up to demand one of the central tenets of liberation: the freedom to define themselves.

The histories of homosexuality, bisexuality, and gender diversity are filled with incredible pain and enormous pride. Medical and psychological professions have often proposed and addressed, in starkly medical terms, the alleged “deficiencies” and “mental diseases” of LGBTQ people.

During what has come to be known as the Eugenics Movement in science, some scientists viewed people attracted to their own sex as constituting a distinct biological or racial type — those who could be distinguished from heterosexual people through anatomical markers.

For example, Dr. G. Frank Lydston, U. S. urologist, surgeon, and professor from Chicago, in 1889 delivered a lecture at the College of Physicians and Surgeons in Chicago in which he referred to homosexuals as “sexual perverts” who are “physically abnormal.”

…the unfortunate class of individuals who are characterized by perverted sexuality have been viewed in the light of their moral responsibility rather than as the victims of a physical and incidentally of a mental defect…. Even to the moralist there should be much satisfaction in the thought that a large class of sexual perverts are physically abnormal rather than morally leprous.

Also the American doctor Allan McLane Hamilton wrote in 1896 that “the [female homosexual] is usually of a masculine type, or if she presented none of the ‘characteristics’ of the male, was a subject of pelvic disorder, with scanty menstruation, and was more or less hysterical and insane.”

Physician Perry M. Lichtenstein wrote in 1921 that: “A physical examination of [female homosexuals] will in practically every instance disclose an abnormally prominent clitoris.”

And in 1857 in France, Ambroise Tardieu wrote: “This degeneracy is evidenced in men who engage in same-sex eroticism by their underdeveloped, tapered penis resembling that of a dog, and a naturally smooth anus lacking in radial folds.”

Rather than considering homosexuality, bisexuality, and gender diversity as differences along a broad spectrum of human potential, some sectors of the medical and psychological communities forced pathologizing language onto queer and trans people.

Dr. Sigmund Freud, for example, saw homosexuality as a developmental disorder, a fixation at one of the intermediate pregenital stages. He believed this was caused, at least in part, by an incomplete resolution in males of the Oedipal complex.

Freud wrote in a 1935 letter to a mother who had asked him to treat her son’s homosexuality:

Homosexuality is assuredly no advantage, but it is nothing to be ashamed of, no vice, no degradation; it cannot be classified as an illness; we consider it to be a variation of the sexual function, produced by a certain arrest of sexual development.

The [sexual] excesses of female inverts exceed those of the male,… and this is their one thought night and day, almost without interruption. [Male inverts] feel the need for passive submission… and occupy themselves with feminine pursuits. Nearly all [female and male] inverts are in a more or less marked degree psychopaths or neurotics.

There were, however, many conservative critics who attacked this new trend warning that educated women would be unfit to fill traditional roles in society. Others, like Dr. Edward Clarke, in 1873 said that study would interfere with women’s fertility, causing them chronic uterine disease.

Women’s colleges are the great breeding ground of lesbianism. When young women are thrown together, they manifest an increasing affection by the usual tokens. They kiss each other fondly on every occasion… They learn the pleasure of direct contact… and after this, the normal sex act fails to satisfy them.

Ellis posited that female homosexuality was increasing because of the rise of feminism, which taught women to be independent of men.

All of this has resulted in members of the medical professions committing LGBTQ people to hospitals, mental institutions, and jails, and forced pre-frontal lobotomies, electroshock, castration, and sterilization. We have been made to endure aversion therapy, reparative therapy, Christian counseling, hormonal castration, and genetic counseling.

One of the antagonists in Cured is physician Irving Bieber who co-authored a study in 1962, “Homosexuality: A Psychoanalytic Study of Male Homosexuals” sponsored by the New York Society of Psychoanalysts, in which he concluded that homosexuality constituted a psychopathology that could be cured or prevented with psychoanalysis.

Bieber later was quoted in 1973 saying: “A homosexual is a person whose heterosexual function is crippled, like the legs of a polio victim.”

In addition, the psychiatrist Charles Socarides, founder of the National Association for Research & Therapy of Homosexuality (NARTH), argued that homosexuality is an illness, a neurosis, possibly caused by an over-attachment to the mother, which he said could be treated. Bieber and Socrarides became the authoritative and often-referenced researchers in the area of causation and treatment of homosexuality.

Cured profiles the street activism, including when I and my compatriots of the Gay Liberation Front and Gay May Day collective, friends from the Mattachine Society, and members of the newly formed Gay Activists Alliance stormed the APA convention in May 1971 at the Shorham Hotel in Washington as Franklin Kameny of Mattachine D.C. leapt upon the stage and declared “war on the psychiatric profession.”

The year following, APA held its next annual conference in Dallas. Barbara Gittings and Franklin Kameny again presented their views and facilitated a workshop discussion, this time joined by “Dr. H. Anonymous” (a.k.a. psychiatrist Dr. John E. Fryer) wearing a costume mask to hide his identity who discussed his experiences as a gay psychiatrist and member of the APA.

By 1973, the APA had finally changed its designation of homosexuality for those comfortable with their sexual orientation, now asserting that it does not constitute a disorder: “[H]omosexuality per se implies no impairment in judgment, stability, reliability, or general social or vocational capabilities.”

Two years later, in 1975, the American Psychological Association followed suit and urged mental health professionals “to take the lead in removing the stigma of mental illness that has long been associated with homosexual orientations.”

The APA announced in its 2013 DSM-V that the diagnosis of “gender identity disorder,” which the manual has imposed upon transgender people since it published DSM-III in 1980, underwent what the APA subcommittee deciding on the change considered as a more neutral designation, “gender dysphoria,” which they saw as descriptive rather than diagnostic and pathologizing.

Cured makes clear the truth in Margaret Mead, the American cultural anthropologist’s statement: “Never doubt that a small group of thoughtful, committed citizens can change the world; indeed, it’s the only thing that ever has.”