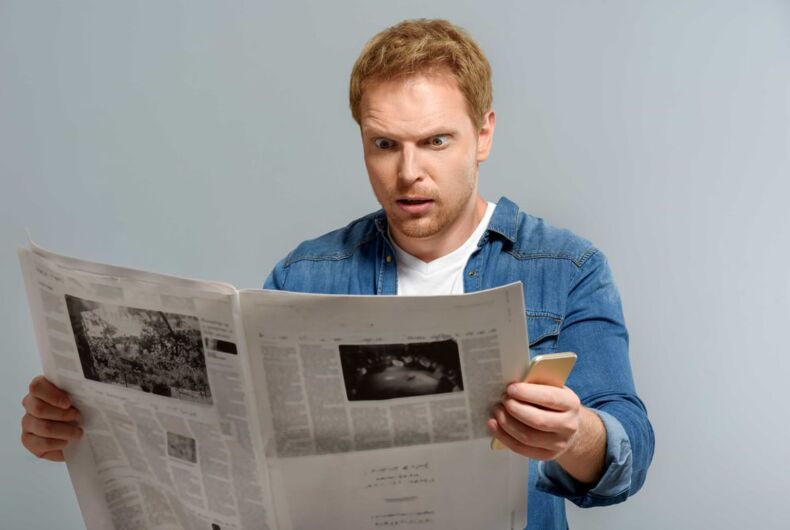 TJ Montemer — the publisher of the Mirror Media Group including publications such as the Santa Monica Mirror, Palisades News, and LGBTQ newspaper The Pride LA — allegedly denounced a teacher being criticized for asking his students what their preferred pronouns are.

“There is no place in school where this should be,” Montemer wrote in a comment from his Facebook page, “… In the real world, no one gives a hoot about your gender identity. Woke kids equal soft kids which equal soft adults.”

Montemer further said that it’s not “a teacher’s place to let kids in middle school decide anything without [their] parents” and that he “hopes this changes in the right direction before my kids get there.”

According to the Los Angeles Blade, Montemer made the comments about a report from Spectrum News Orange County about a teacher at Oak Middle School who gave out a survey during the first week of class. The survey included a question requesting students to provide their preferred pronouns.

Students told reporters they understood that this was their teacher’s way of being inclusive. “He wanted his students to know that they are in a safe space,” a student who did not want to be named told Spectrum News.

Still, parents and right-wing activists who have been battling it out with the Los Alamitos Unified School District (LAUSD) claim this is evidence that critical race theory and other so-called “woke” actions. “Everything has gone so woke and so left that I can’t take it anymore,” Staci Muller, a parent who already removed her students from the district but is planning to run for the LAUSD board, claimed.

Both Muller and Robert Aguilar, an organizer and failed LAUSD board candidate, claimed that it’s inappropriate for the teacher to ask students about “sexual stuff” and “about their sexuality,” despite the fact that the teacher asked about pronouns, which would reflect the student’s gender identity, not sexual orientation.

The Spectrum News report was shared in a private Facebook group for residents of Rossmoor, a subdivision of the Los Alamitos area within Orange County. That’s when Larry Tenney, a resident and member of the Facebook group, saw Montemer’s comment.

“By his post, Montemer seemed disgusted, outraged even, with the idea,” Tenney told the Blade, and discovering that he ran a pro-LGBTQ publication “shocked” him. Tenney “decided to leave a reply to Montemer expressing my disgust that the publisher of The Pride LA would be posting such ignorant homophobic things.

“I also informed him that California law requires 7th grade students receive 10-13 hours of sex education and that includes LGBTQ awareness and understanding,” he added.

In response, Montemer blocked Tenney, but not before other people saw it and also replied, and not before Tenney shared the revelation outside the group.

Part of his livelihood comes from the #LGBTQ community! pic.twitter.com/TzdGW0aReW

Absolutely disgusting that the publisher of @thepridela , a newspaper servicing the LGBTQ+ community in Los Angeles, would publicly condemn a teacher for asking students their preferred pronouns. https://t.co/9CTkvFx2f0

Montemer has since deleted the comment, but Tenney told the Blade, “I don’t know, maybe he didn’t want his right-wing Orange County friends to know he was publisher of The Pride LA?”

Montemer could not be reached by the Blade for comment.

Other comments he has made on social media have come to light as well. In 2020, he said in response to an article about raising taxes to pay for state homeless services, “It’s gotten to the point where I see a homeless person and can give a shit less.”

Mirror Media Group boasts that they print about 45,000 newspapers in circulation and over 50,000 email subscribers between their seven properties. The Pride LA, which prints bi-monthly, accounts for most of both groups, with only the Santa Monica Mirror having more email subscribers, according to the company’s website.

Meanwhile, LAUSD continues to face an intense, coordinated right wing effort to reform many inclusive rules and recall school board members who are not supportive of the right’s agenda. While some parents and activists at this week’s meeting held up signs such as “LGBTQ Inclusion is the Law,” their opponents held up “Recall” signs and claimed that teachers like the one at Oak Middle School is attempting to “groom” students. There is a website dedicated to documenting these “grooming” attempts, in support of recalling the LAUSD board.

Clinical psychologist Dr. Rebecca Romo testified at the last meeting, “There are no grooming behaviors represented of the teachers cited on the yes on recall website. This assertion is false blatantly and empirically maligning two of our youngest and best and brightest teachers.”

Aguilar and others continue to push the recall because they insist that “adult teachers should not be discussing sexuality with their minor children,” despite the law and the repeated fact that pronouns do not represent one’s sexual orientation.

Pansexual people are real & valid. No matter how uncomfortable it makes you.