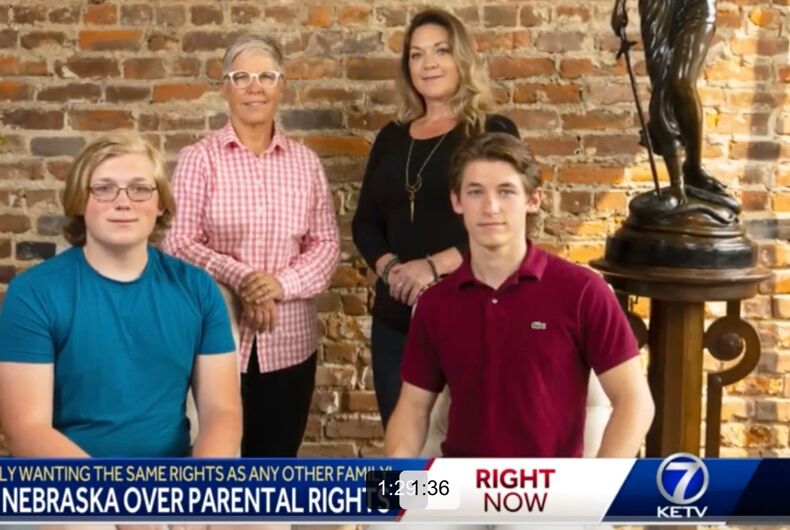 Two women are suing the state of Nebraska to be recognized as the mother of both of their children, claiming that the state is denying them their parenthood because of their gender because an opposite-sex couple in their situation wouldn’t have their parenthood denied.

Erin Porterfield and Kristin Williams each carried one of their children and lived as a family even though they couldn’t get married in their state. The women broke up in 2013, two years before the Supreme Court would legalize marriage equality in all 50 states.

Related: Students stage massive walk-out after a trans girl was blocked from the locker room

Since they couldn’t get legally married, though, the state only allowed each child’s biological mother to be listed on their birth certificate.

Now, unless they get married, the state of Nebraska refuses to recognize them as equal parents to their children.

For years, they have attempted to update their sons’ birth certificates, but the state continues to reject them. A court has currently granted Williams and Porterfield in loco parentis rights over the other’s biological child, but that only provides temporary legal status rather than full parental rights.

Represented by the ACLU of Nebraska, as well as the law firm Koenig-Dunne, Williams and Porterfield, the women filed a lawsuit on Monday claiming the state is violating their constitutional rights and discriminating against them based on their gender.

Angela Dunne, a managing partner at Koenig-Dunne, explained to local news station 6 News that an unmarried straight couple would never be treated this way.

“If you had a man and a woman in this exact same scenario, not together anymore, never married, do not want to get married, so we don’t have adoption available to them, all the man needs to do is go and sign an acknowledgement of paternity and he gets put onto the birth certificate and it is a legal order then that he is a parent. Erin and Kristin can’t do that because they’re women.”

The lawsuit is petitioning the state to allow anyone, regardless of gender, to provide voluntary acknowledgment of paternity rights.

For Williams and Porterfield, gaining these rights is a way to protect their children. “It makes me feel more secure to know Kirstin is there should anything happen to me,” Porterfield told local ABC affiliate KETV.

“My concern is that, would one of us pass away all of a sudden, that the kids get equal access to the benefits therein without unfair taxation,” Williams added.

Right now, each woman’s non-biological son would be taxed on an inheritance as if they were not related.

“Our sons are our entire world and we want to make sure we’re doing right by them,” Porterfield said in a statement released by the ACLU. “Our boys have a right to the security of having both parents on their birth certificates, a required document in so many life changes and decisions. That’s why this matters to us. It’s about looking out for our sons.”

This summer, the moms submitted a Voluntary Acknowledgment of Parentage form that was edited to be gender neutral. The Nebraska Department of Health and Human Services (DHHS) turned it down.

DHHS responded with a letter stating that “at this time, the only routes to legal parentage under Nebraska law are through marital presumption, adoption, or biological relationship,” and added that DHHS would have to “interpret new meaning into the current laws” in order for Williams and Porterfield to gain parental rights. Doing so, the letter said, would “extend beyond the authority of the executive branch.”

The moms’ lawsuit says that’s not true, since the state accepts declarations of paternity “without any thought or inquiry” to make sure there actually is a biological relationship, at least when it comes to men claiming to be fathers. They say this violates their equal protection rights in the U.S. Constitution because the only reason anyone is questioning their relationship to the children is because of their gender.

“The couple had the opportunity to get married and chose not to,” Rickets incorrectly told KETV. “So, we looked at how Nebraska law reads and we applied Nebraska law.”

So Porterfield and Williams sued.

“The Ricketts administration didn’t have to go this route,” Williams told KETV. “They are choosing to take up taxpayer’s dollars, the time of everyone involved, to continue to pursue hateful actions towards queer people.”